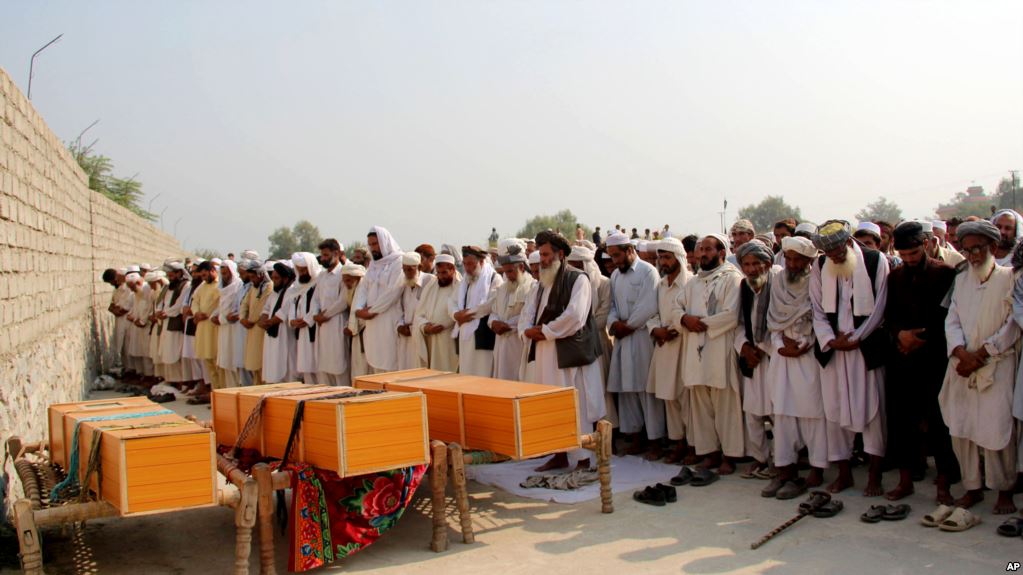 US Airstrikes In Afghanistan Kill 16 Civilians, Mostly Women And Children

Friends and family pray during a funeral procession for victims of a U.S. airstrike in the Nangarhar Province, Afghanistan, Aug. 8, 2017. (Photo: Twitter @Qadir Sediqi‏)

Afghan officials today confirmed that US airstrikes targeted and killed at least 16 civilians, mostly women, and children, in the eastern Nangarhar Province, targeting the civilians as they tried to flee out of an ISIS-held district where heavy fighting has been ongoing.

The governor of the Haska Meena District said that the attacks targeted vehicles trying to get out of the area, and that eight of the slain were all members of the same family. An unspecified number of others were wounded in the attack.

The Pentagon, for its part, confirmed the attack, but insisted that everyone killed was an “extremist fighter,” and that they believed the people piling their meager possessions into the vehicles were actually “loading weapons.” Officials added that because the vehicles were in the middle of nowhere “there was zero chance of civilian casualties.”

Which would conceivably have been true if the vehicles weren’t packed full of civilians in the first place. Claims of “extremists” are common enough for the Pentagon at first blush, but with the casualties heavily women and children, it won’t stand up to much scrutiny.

This is the second strike in the last few weeks in the district which killed civilians. The previous attack targeted a prayer ceremony, and the U.S. similarly claimed that the praying civilians were “ISIS members.”

Funeral were held for victims of US Air Strikes in Haska Mena Area of #Nangarhar #Afghanistan. 15 Civilians were killed, 18 were injured. pic.twitter.com/BdIXIoDhlt