Dale Brown of Threat Management Center checks in on an elderly woman in the Boston Edison neighborhood on May 11, 2011. (AP/DFP)

Editor’s Note: This article is Part II in a special series of MintPress exclusives from Detroit. Part III will investigate how members of the Detroit community are working to maintain a sense of normalcy and rejuvenate the once thriving city. Part I in the series, “Thirsty For Progress: Detroit Water Brigade Makes A Stand Against Water Shut-Offs,” can be found here.

DETROIT — The City of Detroit’s Proposal for Creditors report, released in June 2013, set off a debate on what strategies could be effectively implemented to turn Detroit’s economy around and provide the community with much needed resources. Kevyn Orr, the city’s Emergency Manager at the time, highlighted a range of issues that Detroiters must contend with on a regular basis.

Among these issues is the reality that the Detroit Police Department has been hampered by mismanagement, lack of consistent leadership and outdated equipment. Orr’s report connected these problems to low employee morale and low case-closure rates. Specifically, the report drew attention to the average dispatch time for a Detroit police response to emergency calls: 58 minutes. Then-Police Chief James Craig argued the response time did not take into account delays caused by dispatchers, calling it a data management issue.

MintPress News previously reported on the mass exodus that has taken place in Detroit in recent years. The city experienced massive economic growth from 1910 through the 1940s, when the city thrived on an abundance of industrial and auto factory jobs. In the 1950s and 60s, however, factories started to leave the city. As job opportunities dwindled, so did the population of Detroit — it fell from nearly 2 million people in 1950 to under 750,000 in 2010. As the population has fallen so has the police force. National Review reported in 2013 that the DPD has lost as much as 40 percent of its staff over the last decade alone. As Orr’s report highlighted, the department also uses outdated equipment, including an emergency-dispatch system that was prone to crashing and expired bulletproof vests.

After Orr’s report was released, the DPD went to work implementing the recommendations it contained. As of October 2014 the response time for an ambulance was down to 12 minutes and 18 minutes for a police officer to respond to life-threatening emergency calls. As of last month, those times have further dropped, to just over 10 and 17 minutes, respectively, according to Detroit Dashboard, a public website that tracks quality-of-life statistics on a weekly basis.

However, the DPD’s media relations department told MintPress that the response time is actually down to 14.91 minutes. Yet despite the apparent improvements, Detroit police still take longer than the national average of 11 minutes to respond to emergency calls.

After leaving office in December 2014, Orr told NPR that he was satisfied with the changes:

“I’m happy to say that our response times are actually down quite a bit – probably about approximately 18 percent. Our home site clearance rates are almost at three-quarters and, in fact, crime across the city is down by double digits – violent crime. So it’s been a noticeable and fairly significant change in a relatively short period of time.”

Before this progress had been achieved, though, alternatives to traditional community protection had already been cropping up throughout the area — an unforeseen consequence of the splintered population and weakened police force in Detroit. In his report, Orr wrote that “residents and business owners have been forced to take their safety into their own hands; some relatively well-off sections of the City have created private security forces.”

“Commander” Dale Brown is one of the residents who has stepped up to provide community protection and services he felt was lacking. 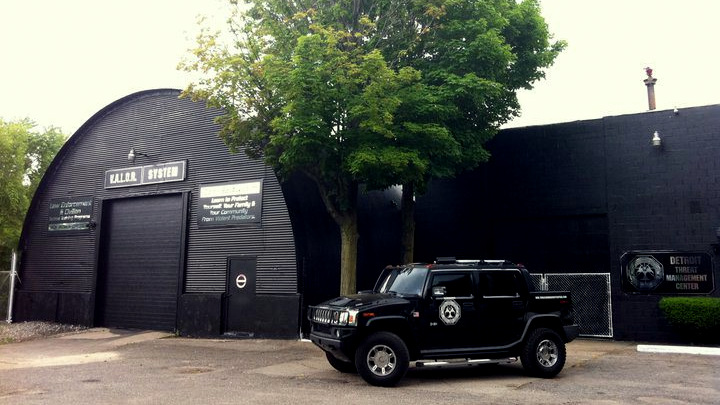 The Detroit Threat Management Center in inner-city Detroit is situated on the bank of the Detroit River at the U.S.-Canada border. The large black compound is an imposing structure, but one that’s almost out of sight due to the surrounding construction.

Two black Humvees with the center’s logo are parked outside. Inside, the Threat Management Center looks a lot like a gym — there are punching bags and an obstacle course. But there’s also an array of fake knives, dummy batons and airsoft guns, which the center uses in tactical training.

“Everything here is designed to increase the probability of producing nonviolent outcomes,” Brown told MintPress. “The ability to solve an issue without creating collateral issues.”

Promotional material from the Threat Management Center describes it as a “private corporation that specializes in non-lethal methods of managing threats. Threat management provides education and facilitation services for individuals, corporations, and communities.”  Brown stresses that the center is a school offering tactical training, a functional fitness course, as well as private and community services. He says the focus is as much on the physical as the psychological.

Brown served as a U.S. Army Airborne paratrooper from 1989 to 1991, then moved into private investigation work in Virginia. He began teaching self-defense classes at the YMCA and public parks in 1994. After witnessing an attack on a 14-year-old girl and being told by police he would face consequences for intervening in violent crimes, he says he recognized that the community was lacking protection, with police focused more on prosecution of crimes.

It was at that point, he says, that he moved from training community members to also operating as a liaison between the community and police. “The community was not being protected. The training came together out of necessity,” Brown told MintPress. By 1995 he was developing strategies, tactics, and logistics to remove violent criminals from Detroit. He does not consider himself a vigilante but rather “a proactive agent of change.”

Brown founded the Detroit Threat Management Center and an “anti-terrorism” bodyguard academy in 2000. He has also helped create a volunteer unit known as the Violence Intervention Protective Emergency Response System, or VIPERS. The Threat Management Center’s reach extends beyond Detroit: It was involved with rescue missions following Hurricane Katrina, when the team deployed with the U.S. Army Airborne to search for those stuck in the post-storm wreckage.

When the team is dressed in their black and white camo, and protective equipment, they almost resemble a paramilitary outfit in a destabilized region of some other less fortunate nation — not in the heart of a major American city.

Brown says the growing tension between the public and police is not a result of improper training but a lack of training in general. “Police are trained for about five-and-a-half months. This is of zero value, it’s not real training,” Brown said. “You couldn’t learn everything about football and be ready to play professionally in five months, but we expect the police to be able to go into the street after five months.”

He also expressed disdain for what he calls “fear-based training,” saying police have “no tactical understanding, no strategic understanding.” He continued:

“One of the things that drives me as an instructor is that we can decrease the likelihood of having negative interactions between law enforcement and the public and increase officer safety while increasing officers’ confidence through competence and creating nonviolent outcomes. This can only come from a different education system that is not fear-based.”

Brown’s goal of reducing violence in the Detroit area is no small task. When Kevyn Orr released his report in 2013, he noted that in 2012 Detroit had the highest rate of violent crime of any U.S. city with a population over 200,000, based on the FBI’s Uniform Crime Reports database, and violent crime in Detroit was five times the national average. For Brown and the Threat Management Center, the goal of reducing violence is part of an overall strategy of building community relations and not antagonizing the communities he serves.

Brown operates a team of 30 staff members, each of whom is carefully chosen. “We are a performance-based organization, we are not looking for people who are strictly financially motivated or looking to fulfill a Rambo fantasy.” He has no problem expressing his lack of interest in potential candidates who are military-minded or former military, noting, “We don’t kick in doors or put bags on people’s heads.”

The ideal VIPER as a community-conscious individual, who is self-aware and intelligent, he says. It’s someone who enjoys helping and is at least 25 years old. The performance is much more intellectual than physical:

“It’s about keeping yourself cool, calm in a state of ‘solution seeking.’ You cannot be fixated on fighting, shooting or wanting power. We are looking for individuals who are prepared to put themselves at risk in an intelligent way.”

Captain Randy Johnson has been with the VIPERS for eight months. He does not have a military or security background, but says he watched the growth of the Threat Management Center for two years before deciding to get involved and make a career change that would allow him to support his community. Johnson says his specific interest is participating in the “victory missions” for domestic abuse cases. “I think it’s wonderful. We get to help out a part of the community that otherwise would not get help,” he told MintPress.

When asked how the VIPERS fit in with traditional police, Johnson says they are offering two different services: “We work to deter and prevent violent outcomes, and the cops focus on prosecuting crimes.” He believes with the proper training it is likely that similar models will emerge elsewhere.

“This needs to be everywhere,” he said, “all around the world to help protect communities.”

Community protection as an alternative to traditional policing The difference between the police and the Detroit Threat Management Center, Brown says, is that “the police operate on appeals to authority, they are not honest when they cannot provide all the answers. We have a completely different way of thinking.”

The center also offers free children’s classes on gun safety, as well as “Free Family Fridays,” when families are invited to check out the compound and learn about the services offered there. The VIPERS even have a boat to teach basic boat safety, provide security on the marina, and offer free towing for broken-down boats. Brown says this programming is all essential to ending cycles of violence.

“If we want kids to perform better as adults we have to create the conditions for them to do so, which means not exposing them to violence or crime,” he said.

In Brown’s 20-year career as a “threat management specialist” not one person on his team has been killed nor have they ever killed anyone while protecting a client. When asked if his training model could replace traditional police training he is careful to distinguish between what he does and what the police do.

While Brown believes that police violence is increasing and needs to be dealt with, he is not ready to get eliminate the institution itself and replace it with private security. “You need people to protect the community from the negative elements and enforce the laws,” Brown adds.

He says his role is as a community protector, not someone who stops violations of the law. And this may be the key to changing the perception of police from instigators of violence to protectors of the powerless.

Ultimately, he says, “Everyone has value and everyone should be protected. People like protectors.”