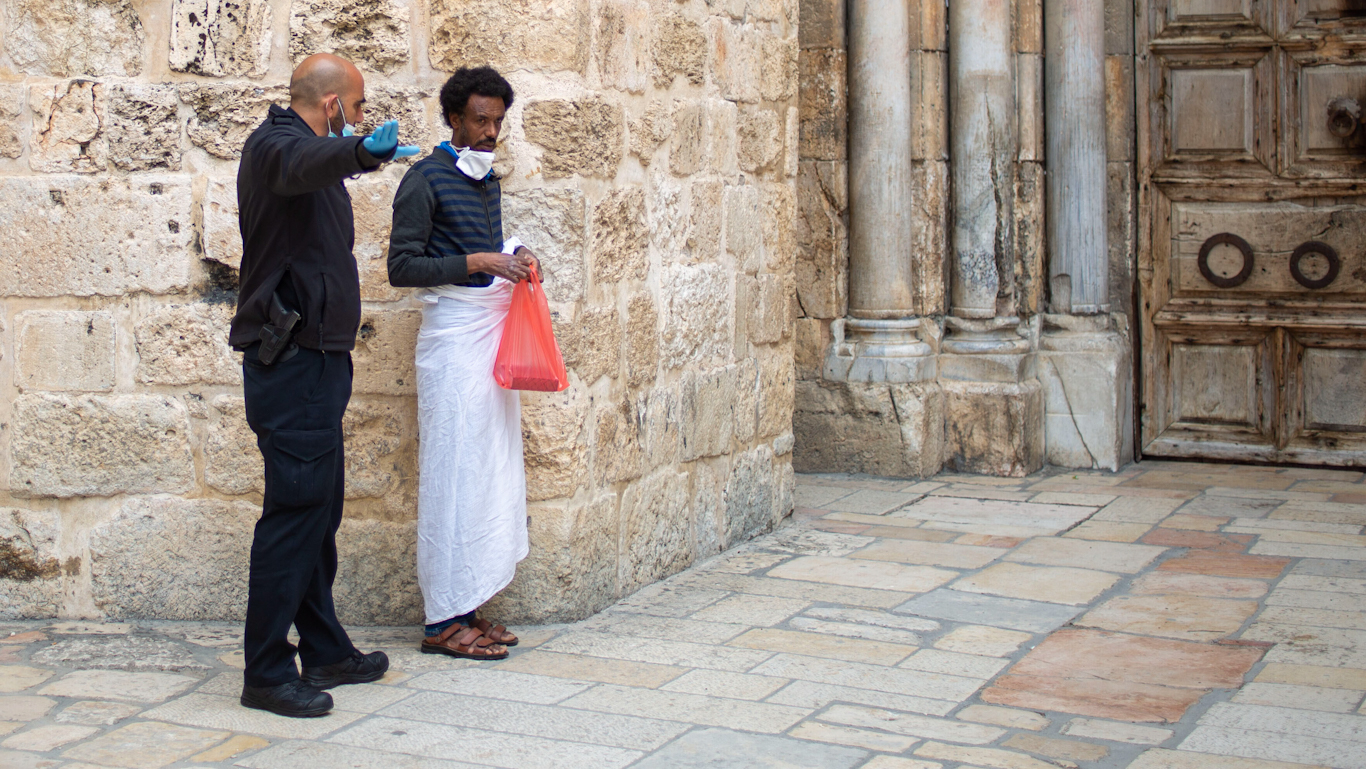 The spread of coronavirus among Palestinians is dangerous to Israeli Jews, yet authorities and their various agencies continue to destroy clinics, demolish homes, and raid towns and neighborhoods rather than offer the help needed to ward off the virus.

Occupied Palestine – In light of the COVID-19 pandemic, one would expect that the desire to work as one world to curb the spread of the virus would outweigh any considerations of politics, race or religion. However, the violence and neglect of Israel’s Zionist government and non-governmental bodies towards Palestinians not only continues in full force but in many cases, has increased.

March and April of 2020 will be remembered not only for the pandemic but for the violence meted out by the Israeli authorities against the populations that Zionists are determined to destroy – Palestinians living under occupation in the large ghettos erected by Israel, Palestinian citizens of Israel, and those who languish in Israeli jails. In addition, there are the Ultra-Orthodox, or Haredi Jews who live in segregated communities and are despised by the Israeli state.

The neglect and the violence of the authorities, paired with the callousness of Israeli society and the major elected politicians, are all symptomatic of a society that is inherently racist. A society that is incapable of demonstrating even the slightest measure of sympathy for the suffering of others.

In today’s reality, the spread of coronavirus among Palestinians is, in fact, dangerous to Israeli Jews as well. Still, the authorities and their various agencies continue to destroy clinics, demolish homes, and raid towns and neighborhoods rather than offer the help needed to ward off the virus.

One of the plagues that Palestinians have to live with is a group of violent, severely troubled, sociopathic Jewish teenagers who call themselves the “Hilltop Youth.” The name may sound somewhat endearing but the boys who are part of this group are radically indoctrinated, violent and racist and were capable of burning to death a family in their home.

Radical groups of violent Zionists have always been looked upon favorably by the Zionist authorities. Even though from time to time they may have crossed the line. Because they are ideologically aligned with the Zionist leadership, they are never punished even when they are involved in murder. This was the case was when armed terror gangs conducted the massacre at Deir Yasin in April of 1948, and so it is with recent cases of Zionist youth’s deadly attacks on Palestinians.

Even the coronavirus pandemic has not changed that the way the state of Israel allows these violent gangs to terrorize Palestinians. In fact, they have stepped up their attacks on Palestinians. According to a report by the United Nations, Jewish gang violence against Palestinians has spiked by 78 percent between March 17 and 30. The report, which was even mentioned in the pro-Zionist publication The Jerusalem Post, cites “at least 16 attacks by Israeli settlers” that “resulted in five Palestinian injuries and extensive property damage.”

The United Nations specified that “The attacks include stoning of vehicles, vandalizing structures and physical assault.” “In the Gush Etzion region,” in which many of the most violent Jewish gangs reside and are indoctrinated, “some 100 Palestinian-owned olive trees were uprooted and in Hebron, surveillance cameras were damaged or stolen from a home and a school.”

Palestinian Prisoners Day which was commemorated this April brought attention to the grim reality in Israeli prisons. While information is not readily available and the authorities are not forthcoming, it has been reported that there are cases of COVID-19 within the prison walls.

It is well known that conditions in the prisons are inadequate at best and criminally negligent at worst. With overcrowding, lack of proper hygiene and no proper sanitation, the prisons hold the potential for a massive spread of the virus. In a case that was recently reported by Addameer, the Prisoner Support and Human Rights Association, a Palestinian prisoner was placed in isolation due to COVID-19 symptoms. However, the conditions in a prison isolation cell are far from being suitable for a sick person.

In another case, Nourredin Sarsour was infected and this was only revealed once he was released.

In the days since I reported here about Israel’s unhinged attacks against the Ultra-Orthodox or Haredi Jewish community, more reports have emerged about violent raids by the Israeli authorities. In an email I received from Rabbi Hirsh of Neturei Karta in Jerusalem, the Rabbi writes, “those in charge of our “public health” conduct constant raids on our neighborhoods, throw stun grenades, and indiscriminately beat the residents.”

Another email came to me from local Haredi activists begging for help from the outside. This email included the following videos, which are already creating shock waves.

The violence displayed by authorities only confirms their lack of interest in creating an environment of understanding and tolerance. When Israeli police enter the Haredi neighborhoods they do so like violent invaders and not like agencies that are trusted to help the residents.

The immense differences that exist between the Haredi Jews and secular Israeli society and the way that the two communities view state authorities are enormous. Now, with each raid on a Haredi neighborhood, the anger and frustration grow and the potential for clashes grows with it. Israeli secular society, with its bigoted attitudes towards the Haredi Jews, stands by the state and its policies of persecution and demands that they do more. It is a vicious circle where the state of Israel clearly wants to see things escalate.

The Palestine Chronicle reported recently about a coronavirus testing station that was closed down by the Israeli authorities. This was in Silwan, a Palestinian town of 55,000 people adjacent to the Old City of Jerusalem. “According to Sami Mshasha, a spokesman for the United Nations Relief and Works Agency for Palestine Refugees (UNRWA), Israel has prevented his organization from providing health services related to the coronavirus for Palestinians in occupied East Jerusalem.”

Mshasha also told the Palestinian news agency WAFA, that the Israeli measures are a “continuation” of restrictions imposed by the Israeli authorities on UNRWA activities in Jerusalem, “following the US recognition of Jerusalem as the capital of Israel and the embassy move from Tel Aviv to Jerusalem.” Furthermore, Palestine Chronicle reports that, according to Israeli sources, “the main reason behind the Israeli government action is to prevent any Palestinian Authority activity in Jerusalem.”

This isn't #Israeli apartheid, it is #genocide. Israel refuses to test Palestinians for COVID-19 and shuts testing sites down when they try to do it themselves. "Israel Shuts Coronavirus Testing Clinic in East Jerusalem and Arrests Organizers" https://t.co/WqfZa8BKE5

Genocide has many forms

According to Dr. Yousef Jabareen, a member of Knesset for the Joint Arab List, Israeli authorities have conducted over 200,000 coronavirus tests. Less than ten percent of them were conducted in towns inhabited by Palestinian citizens of Israel, leaving them vulnerable and without crucial information about the scope of the virus in their communities.

Now, a serious outbreak has been reported in the towns of Dayr el-Asad and Al-Ba’ane in the north of Palestine and it is causing a great deal of concern. Similarly, the apartheid system that forces Palestinian Bedouin in the Naqab to live in overcrowded conditions in extreme poverty with a lack of water and infrastructure and a state that provides them no resources to deal with the spread of the virus.

If one were to look at the official definition of the crime of genocide as it is outlined by the United Nations and compare that to all the different ways in which Israel kills or plainly allows Palestinians to die, the similarities are striking. The question that remains is when will the world intervene to sanction Israel for committing these crimes against humanity.

Feature photo | An Israeli police officer confronts a Christian after he prayed outside the Church of the Holy Sepulchre, traditionally believed by many to be the site of the crucifixion of Jesus Christ, in Jerusalem’s old city, April 17, 2020. Ariel Schalit | AP