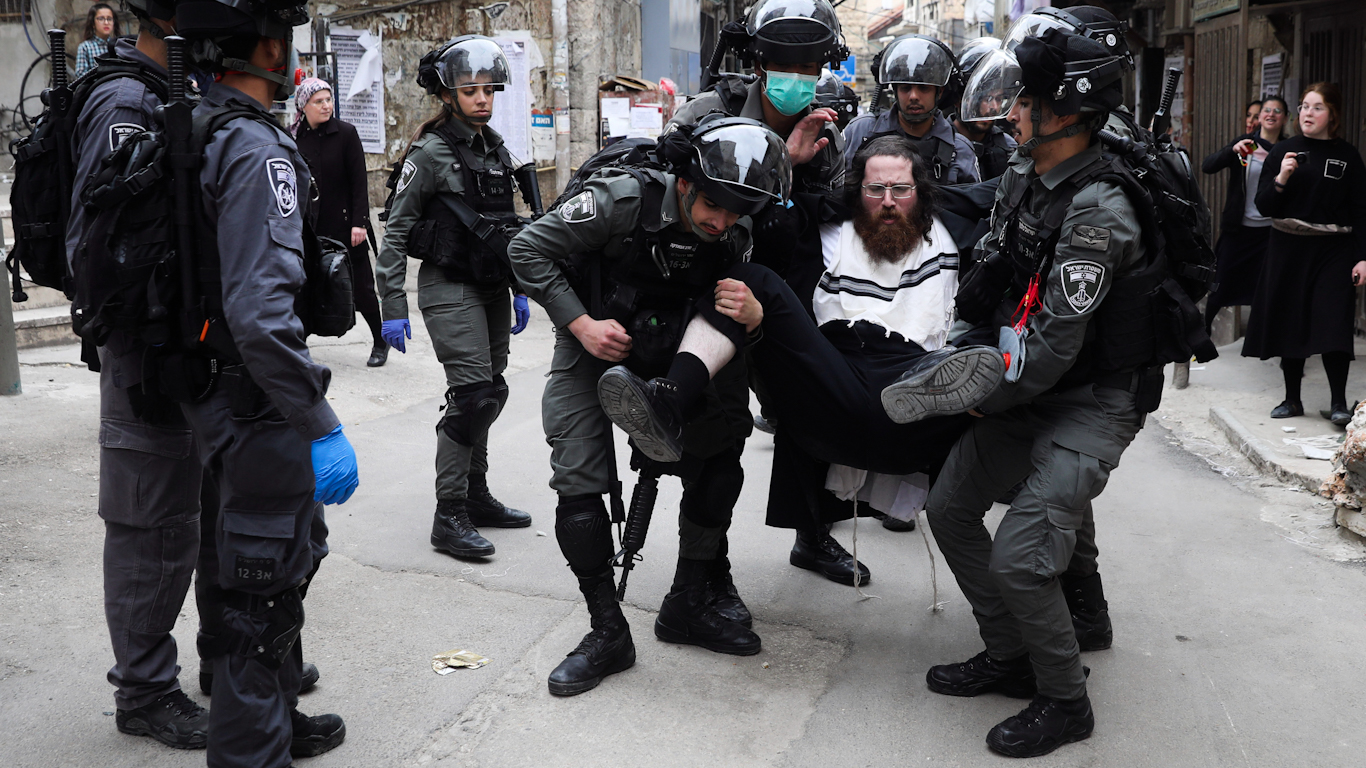 The Israeli government’s long-running campaign to forcibly secularize Israel’s Ultra-Orthodox Jews has left them particularly vulnerable to the coronavirus.

In a conversation I had with Rabbi Yaakov Shapiro for an upcoming episode of the Miko Peled Podcast, Rabbi Shapiro referred to Jewish Zionists as “idol worshipers.”

“They did not get these values, of loving their guns and stealing Palestinian land, from Judaism,” he said. He explained that Jewish people throughout history have kept to themselves, avoided violence and war, and, in fact, are prohibited by heavenly decree from sovereignty over the Holy Land. “Establishing sovereignty in the Holy Land, from which we were expelled by the Almighty,” he explained, is a “terrible sin.”

There are, however, Ultra-Orthodox (Haredi) Jews, that live in the Holy Land and reject Zionism and the State of Israel altogether. “I am with them,” said Rabbi Shapiro.

In the United States, one does not usually hear much about the Ultra-Orthodox community that lives in Israel. Historically, there has always been a small observant Jewish community in Palestine. It was mostly a poor community of people who came to study the Torah and bask in the holiness of the land. There were small communities in Hebron, Tabaria and Safad and, of course, in the Old City of Jerusalem.

In the nineteenth century, some of the Jews in Jerusalem moved out of the Old City into neighborhoods that were built for them by wealthy Jewish donors from Europe. When Zionism emerged in Europe in the late nineteenth and early twentieth century, the entire Ultra-Orthodox Jewish world opposed it in the strongest possible terms. Throughout the twentieth century, all the way up to the very moment when Israel was established, representatives of the Ultra-Orthodox community in Palestine had asked not to be part of the state of Israel.

From the moment it was established, and even to this day, the state of Israel invests enormous efforts and resources to get the Ultra-Orthodox Jews to accept Zionism. Israel also does its very best to secularize this community. These efforts resulted in the creation of a “National Religious” group which the Haredi see as heretics. It also brought about a group of Haredi Jews who do not accept the legitimacy of the state but opted for practical reasons to work with it and within it. Both of these groups have representatives in the Israeli Knesset.

The price that the Israeli government pays to get the Haredi groups to agree to work with it amounts to many millions of dollars to Haredi education institutions. “It is like a fisherman with a worm on a hook,” Rabbi Shapiro explains, “and the Haredi community, like a smart fish, is trying to get the worm without biting into the hook.” The worm is funding, the hook is Zionism, the draft, and modifications to their religious education.

Throughout the twentieth century, as “Israeliness” was being defined as a secular testosterone-filled identity, a deep resentment towards the Haredi community was cultivated. They represented the old Jews in exile who went like sheep to the slaughter. I can attest to the fact that growing up as an Israeli one learns very early on that there are two groups of people one is supposed to hate: The Arabs and the Haredi Jews.

In his book “Real Jews, Secular vs. Ultra-Orthodox and the Struggle for Jewish Identity in Israel,” Noah Efron describes in great detail just how deeply secular Israelis hate Ultra-Orthodox Jews. However, one would do well to remember that the Haredi community preceded Israel.

For Haredi Jews living in Israel, a visit from the authorities means bad news. State institutions have been chasing them and attempting to secularize them in every way imaginable. By far the most intrusive element into their life is the compulsory draft that is mandated by Israeli law and means that every man and woman over the age of 18 must serve in the military. The young Haredi men and women would rather be arrested, and even die, rather than be drafted.

One cannot imagine a less religious, less pious, less observant and more promiscuous environment than the army. Haredi Jews have always rejected the draft and this is cause for police raids and arrests of these young people which of course brings about anger and frustration in the community. The community rejection of the army is a result of many things, not the least of which is that their lifestyle is uncompromisingly religious, they are prohibited from carrying arms and they fundamentally reject the state.

An Ultra-Orthodox Jewish boy is pushed by Israeli police in the Meah She’arim neighborhood in Jerusalem. Mahmoud Illean | AP

A recent report from NPR touched on the conditions within the Haredi community amid the spread of the Coronavirus. The members of the Haredi community live in crowded and very humble conditions in towns and neighborhoods in which only they reside. Many in the community do not speak Hebrew, which they consider a sacred language to be used only in prayer and service, and instead, they use Yiddish, which is the language that Jewish people spoke in Europe. Yet even though the Haredi community in Israel makes up over ten percent of the population, Israel offers no official information in Yiddish.

With very few exceptions, Haredi Jews do not own televisions, do not listen to the radio and do not own computers or smartphones. What one finds displayed on television and online violates the strict laws of modesty that Haredi Jews espouse, and therefore they choose to live without them. This means that they do not have access to information that other people do, and other than what they receive from their own Rabbis and community organizations, they know very little about the outside world.

There has been a great deal of blame thrown at the Haredi community by the Israeli public and the press, claiming that they did not act swiftly enough to stop the spread of the virus. There are claims that their “backwardness” got in the way of effective action. However, as a Haredi friend from Jerusalem wrote to me, “in New York, the infection rate among Charedim [Haredi] in Williamsburg, Brooklyn is the same as that as other crowded non-Jewish communities like East New York. It’s the poverty and crowdedness, not Jewish religious practice or Haredi misbehavior that they have in common.”

My friend continues, “why are Haredi people poor and packed together? Largely because of Zionism, because the draft exemptions ban all work, such that young men can’t work even if they want to.” The draft law allows Haredi men to defer the draft as long as they remain in the yeshiva to study full time and do not go out to work. This restriction places a financial strain on the families and the community as a whole.

My friend, who asked to remain anonymous so I will call him Moishe, confirmed that the Israeli government “relies on the internet and texting to educate citizens and that most Haredim, particularly in Bene Brak and Meah She’arim, have neither.” The former is a city that is all Haredi and the latter a Haredi neighborhood in Jerusalem. “I see almost nothing in my neighborhood in the way of education,” Moishe says. “Nobody is walking around talking to us. There are no handouts in our doors. Nothing.”

Also according to Moishe, “Most people around here have been very careful. Masks, gloves, prayer in the house, standing far apart” and still the police confronted a bunch of ladies who were in line outside the grocery store because they were standing too close. As usual, the police were aggressive, shouting, shining flashlights in people’s eyes. “There were kids there. It was ugly,” Moishe concludes.

In another incident that Moishe mentioned, “this Shabbos the Gestapo Israeli police cracked open the head of a man who was praying outside.” The man didn’t want to break in the middle of prayers “and you know what happens when you don’t obey the Gestapo perfectly.” He was taken to the hospital and needed an operation. “By contrast, police in NYC broke up a funeral by flashing their car sirens. No head breaking like in Israel.”

It is not uncommon to hear Haredi Jews refer to the Israel police and military as Nazis or Gestapo. While this is sort of language is harsh, when one considers the history of the relations between this community and state institutions, particularly the Israeli police, it is not totally surprising that such harsh language is used. Few people on the outside have witnessed the violence with which the Israeli police treat this community. The police use enormous riot-breaking horses that intentionally trample all over people, there are cases of horrific beatings, fire hoses are used as well as stun grenades and violent arrests.

In pre-Zionist Palestine, the Haredi community had excellent relations with its Palestinian neighbors. They shared similar values and lived modestly, side by side. This was ruined once Zionism took over Palestine and placed Jews against Arabs. However, from time to time there are still signs that this natural historic alliance may still be alive.

Israel Frei, a Haredi journalist who writes in Hebrew, recently wrote about cases where Palestinians had reached out to support Haredi communities. He ends his piece with a quote from Abdel Karim Azzam, who is a member of the Islamic Movement Emergency Council, “It is inconceivable to think that Corona will not break down the walls between people.”

Feature photo | Israeli police arrest an Ultra-Orthodox Jew protesting on the Haredi community during the coronavirus outbreak in the neighborhood of Mea Shearim in Jerusalem, March 30, 2020. Mahmoud Illean | AP