The Oslo Impasse: A 23-Year-Old Deal That Benefits Israel At The Expense Of Palestine NEW YORK — Palestinian Authority security forces in the Israeli-occupied West Bank crossed a strange line on Tuesday, firing into the air to disperse Palestinians protesting the construction of a new landfill near Ramallah that would service both Israeli settlers and Palestinian residents.

The incident both illustrates the PA’s unique position as a governing authority and shows a new, but perhaps unsurprising, development of its role in the context of Israel’s illegal occupation.

The location of the shooting raised eyebrows. The gunfire erupted inside Area C, 61 percent of the West Bank excluded not only from Palestinian security operations, but also civil administration and most economic development under the Oslo Accords, a series of agreements signed by Israel and the Palestine Liberation Organization starting in 1993.

The appearance of PA forces in the area signals a tacit acknowledgement by Israel that those forces can secure Israel’s interests better than its own troops.

Without armed Palestinians tasked with preventing them, attacks during a Palestinian uprising that started in October, called “the Jerusalem Intifada” by many Palestinians, centered on the ancient city, one of the few remaining strongholds of Palestinian life.

In other areas where Palestinian forces have acted to maintain the status quo, they have generally succeeded, while any critical attention from international agencies or human rights groups has targeted them, rather than Israel or its own occupation infrastructure.

The landfill is also notable for its odd mix of intended beneficiaries. Its construction has been planned under PA auspices, but the facility will also receive waste from illegal settlements in the Ramallah area, one of the few ways Palestinian developments in Area C can ever hope to obtain needed permits from Israeli occupation authorities.

‘We will not remain the only ones’

When Palestinian President Mahmoud Abbas spoke to the United Nations General Assembly on Sept. 30, 2015, he said little his listeners could not have expected.

“We will not remain the only ones committed to the implementation of these agreements, while Israel continuously violates them,” Abbas said of the Oslo Accords. Palestinian Authority President Mahmoud Abbas addresses the 70th Session of the United Nations General Assembly at the UN in New York on September 30, 2015.

“We therefore declare that we cannot continue to be bound by these agreements and that Israel must assume all of its responsibilities as an occupying Power, because the status quo cannot continue and the decisions of the Palestinian Central Council last March are specific and binding.”

Abbas had promised a “bombshell,” but his announcement seemed more of a predictable, if partial, acquiescence to growing Palestinian pressure against the Accords.

Prior to Abbas’ speech, Sami Abu Zuhri, a spokesperson for the Hamas movement, had called on Abbas to announce Palestinian withdrawal from them.

“Hamas confirms that the current stage is crucial, and resonating speeches and symbolic moves are of no value in dealing with the situation on the ground,” he said.

Like Hamas, most other Palestinian factions, including Palestinian Islamic Jihad and the Popular Front for the Liberation of Palestine, have opposed the Accords since their inception.

Fatah, the party led by Abbas, has usually stood alone among large groupings in supporting the agreements negotiated by its founder, Yasser Arafat.

‘All of its responsibilities’

Even its commitment has wavered at times. In March 2013, the Fatah-dominated central council of the Palestine Liberation Organization voted to suspend coordination with the Israeli army by PA security forces in the West Bank, a cornerstone of the deals.

PCC member Bassm Al-Salhe said the decision, which demanded that Israel “should shoulder all its responsibilities toward the Palestinian people in the occupied state of Palestine as an occupation authority according to international law,” was final.

“This is a decision that was taken and the PLO executive committee will follow up on the implementation,” he told Reuters.

But nothing changed on the ground. Many speculated that PCC members had intended their vote as a message to Israel, which had frozen its transfer of tax revenues collected for the PA in retaliation for Abbas’ application to the International Criminal Court, but also to a Palestinian public weary after more than two decades of the Accords.

If so, the strategy hardly worked. By the eve of Abbas’ U.N. speech, 51 percent of Palestinians surveyed in the West Bank and Gaza Strip supported the dissolution of his PA, while 53 percent said it had become a burden to Palestinians. Sixty-five wanted Abbas’ resignation.

Meanwhile, settler violence in the West Bank reached lethal heights, as their colonization of Palestinian land, along with Israel’s closure of the Gaza Strip and daily attacks against the besieged coastal enclave, continued without pause.

In the weeks after Abbas’ U.N. speech, as a new Palestinian uprising unfolded across Israeli-occupied territories, denunciations of the Accords by other factions, normally a routine of Palestinian political dialogue, rose to a clamor.

Yet the PA’s security forces continued their coordination with Israel, with specific incidents, like the returning of an Israeli soldier’s misplaced gun to him in Hebron, drawing wide ire from individual Palestinians as well as political factions.

By January 2016, the PA had blocked 200 attacks against Israel, arresting roughly 100 Palestinians in the process, Maj. Gen. Majid Faraj of its General Intelligence Service, told Defense News that month.

‘Palestinian policemen and a flag’

When Arafat signed the first of two Oslo Accords in 1993, few considered its terms, scheduled to end with Palestinian sovereignty in the West Bank and Gaza Strip after five years, particularly important. An Israeli soldier looks on as jubilant Palestinians ride on a truck celebrating the signing of the Israel-PLO agreement, May 4, 1994 in Gaza City, Gaza.

While discussing implementation of the deal, PLO Secretary-General Saeb Erekat and Yezid Sayigh, a senior associate at the Carnegie Middle East Center in Beirut, later recounted that Arafat’s “one concern was to secure Israeli agreement for Palestinian policemen and a flag to stand at the Jericho border crossing with Jordan, symbolising the ‘sovereignty’ he was certain would soon be realised in full.”

Otherwise, they wrote, he “refused to discuss its practical details with his own negotiators (let alone the Israelis).”

In theory, the series of deals should have laid the groundwork for an independent Palestinian state in the West Bank and Gaza Strip by 1999 at the latest.

In practice, they subjected Palestinians to decades of not only further occupation by Israel, but also full cooperation with it.

“Oslo was a disaster,” Ramzi Issa, a Palestinian-American activist in New Jersey, told MintPress News. “It gave up historical Palestine and subcontracted the occupation to the occupied.”

In addition to the security coordination mandated by the Accords, their economic agreement, the Protocol on Economic Relations, or Paris Protocol, formally subjected the Palestinian economy to Israel’s control and reliance on its trade, tax and other policies.

At times, Abbas has used popular opposition to the Paris Protocol, which forces Palestinians to pay Israeli prices for imported goods despite their own stagnant incomes, for his political advantage, employing it to push Prime Minister Salam Fayyad, a favorite of Western donors, from office in 2013.

For its part, Israel has rarely even pretended to meet its obligations under the Accords, like restricting the expansion of its settlements, allowing Palestinian economic development, or permitting trade and travel between the West Bank and Gaza Strip.

Many Israeli commitments, like permitting Palestinians to fish 20 nautical miles off the coast of the Gaza Strip, were never implemented for even a day. 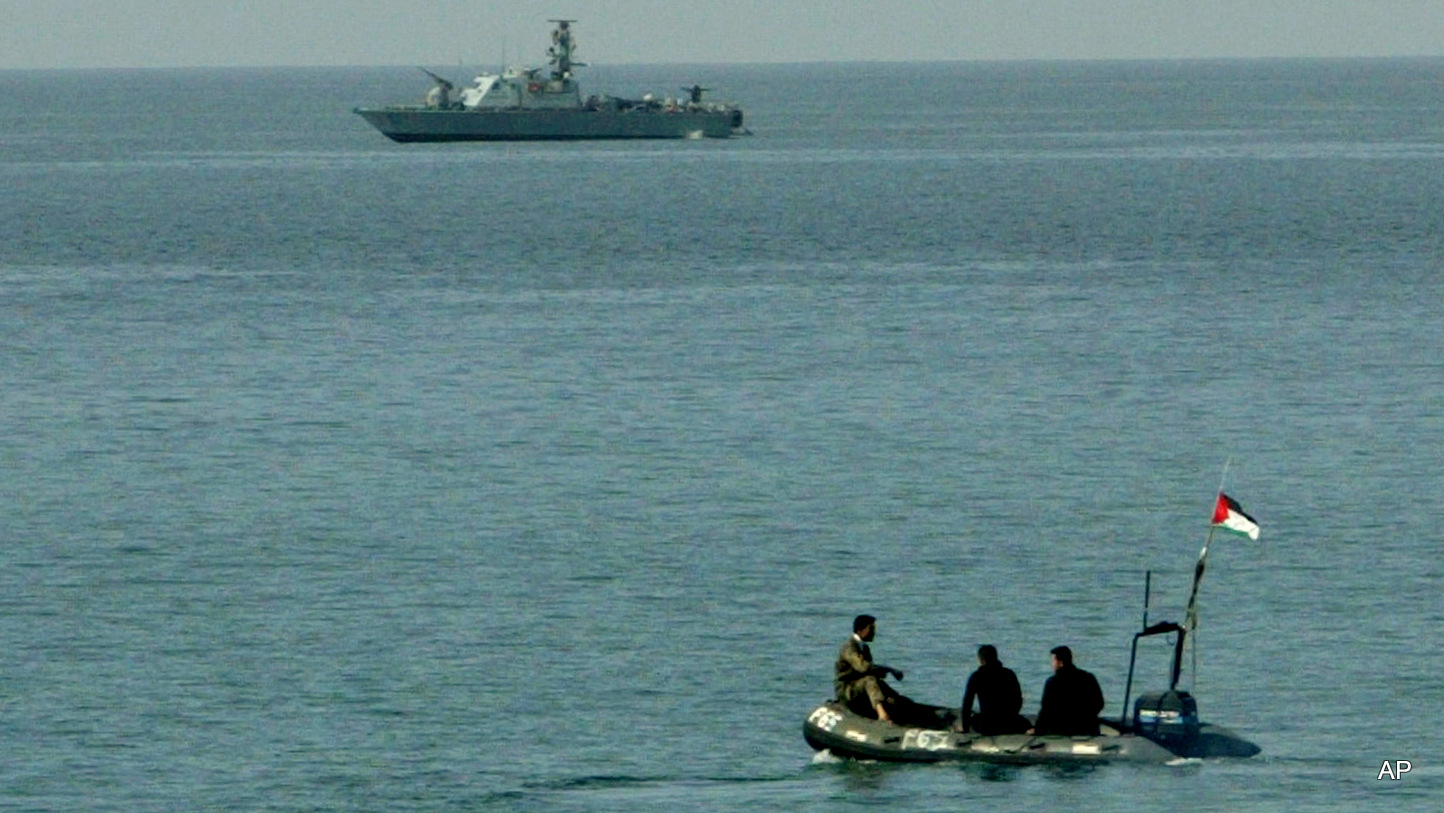 Palestinian police officers sit in a small boat as they pass near an Israeli naval vessel while searching for the body of a Palestinian killed after the Israeli Navy sunk his his fishing boat in the waters near Rafah, off the coast of the southern Gaza Strip, Saturday Dec. 3, 2005.

“The popular resistance of the 2000 Intifada should have given us leverage to make real gains in our liberation,” Hatem Abudayyeh, a Chicago-based member of the U.S. Palestinian Community Network (USPCN) national steering committee, told MintPress.

“Instead, a tiny cabal around Arafat negotiated most of our rights away in secret.”

By their own terms, the Accords should have expired in 1999. But in return for its continued acquiescence to them, the PA receives roughly $1.5 billion in annual aid from donor countries, particularly the United States and European Union and Arab League members.

Between these funds and its own tax revenues — which Israel freezes and releases at will — the PA pays salaries to over 150,000 employees, whose incomes sustain roughly a third of the Palestinian population under PA jurisdiction.

And through its exclusive focus on territories occupied in 1967, the Accords weakened other Palestinian claims, like the right of return to the Palestinian lands ethnically cleansed starting in 1947.

While the Hamas-led Palestinian government in the Gaza Strip does not consider itself a party to the Accords and often denounces them, its authority is defined under the Oslo Accords and established itself through elections conducted under them, and its own behavior can at times mimic that of the PA.

The Gaza administration does not maintain security cooperation or any other formal communications with Israel, but nevertheless secures the barrier established by Israel along the armistice line, preventing not only attacks by armed groups, but also mass protests and infiltration by individual Palestinians.

And its enforcement of terms reached with Israel through intermediaries — for example, by restricting fishermen to the use of fishing areas established in past ceasefire agreements — can often have similar effects to the PA’s security coordination, lacking only direct contact of questionable use.

While the Gaza government has faced difficulties covering its payroll and other expenses since the start of the Syrian conflict in 2011, and particularly the Egyptian army’s ouster of the country’s first democratic government in 2013, donations from Iran and Qatar have helped keep it afloat.

The overall arrangement secures Israel’s occupation of the West Bank and Gaza Strip, cementing its hold over the Palestinian territories through Palestinian security forces and other agencies, at the expense of other countries, ranging from Israel’s closest allies to those most passionately opposed to it.

Nearly a year after Abbas declared their end, the Accords remain intact as ever.

“We linger to what’s familiar and we fear the mystery that comes after abandoning Oslo. What if things got worse?”

Issa attributes the Accords’ survival to the PA payroll.

“Too many people are financially dependent on revenue collected by Israel,” he said.

Abudayyeh said he believes that it is, in many regards, already a dead letter.

“Palestinians in general have already abandoned it,” he said. “It has done nothing for the rank and file and most of the political forces, so most of us have declared it dead for years. What it means for the leadership of the Palestinian Authority is something different.”

But with no clear alternative in sight, a Palestinian economy largely dependent on PA finances, and a status quo working to Israel’s advantage, there is little reason to expect Tel Aviv to bear the costs of its own occupation soon, Abbas’ occasional statements to the contrary notwithstanding.