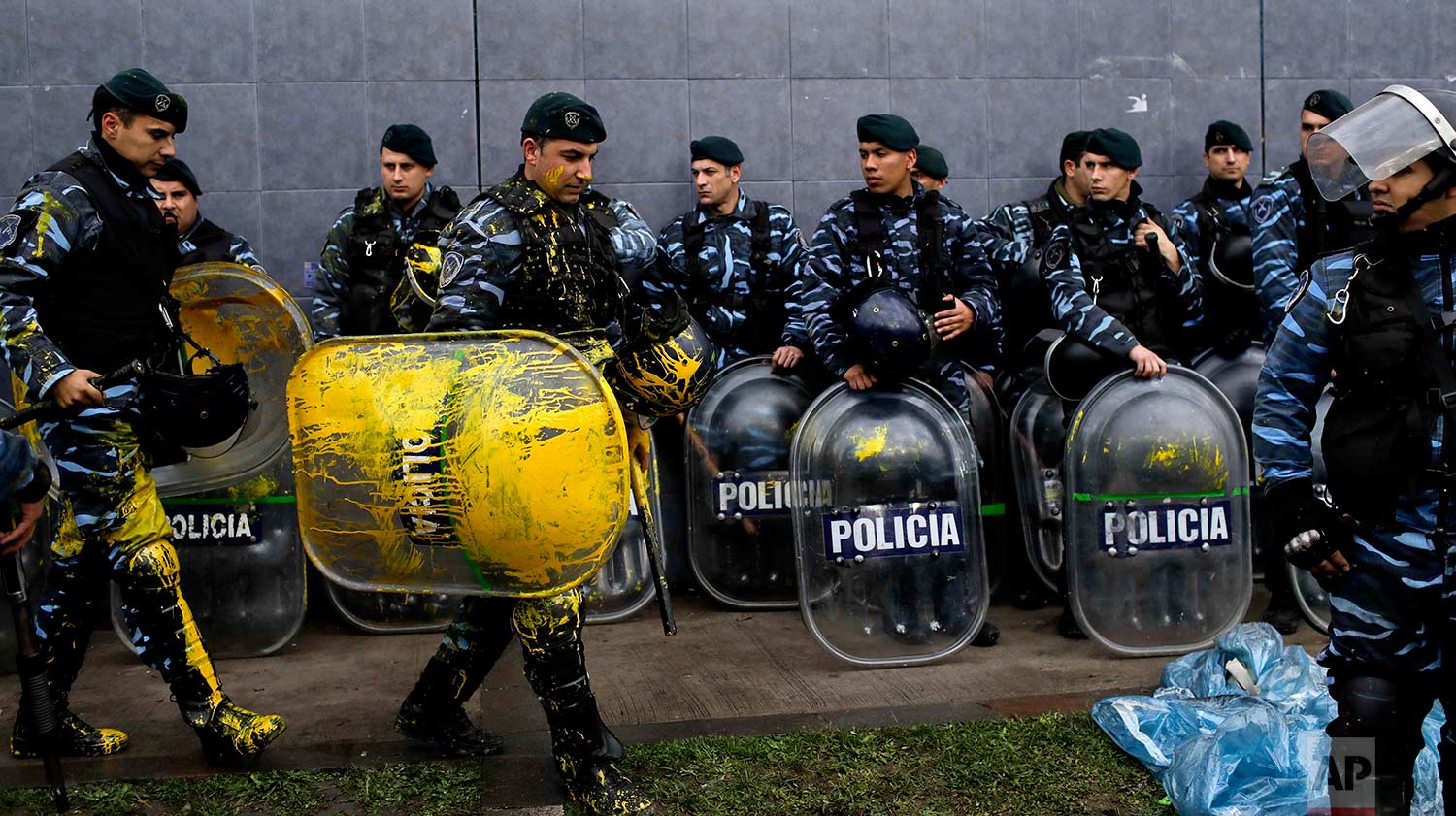 Understanding the politics of police reform in Latin America may be informative for those who hope for changes in policing in the U.S.

Police who were stained with yellow paint thrown by protesters on the outskirts of Buenos Aires, Argentina, July 13, 2017. (AP/Natacha Pisarenko)

Early into his tenure, Sessions said he intended to “pull back on” the Justice Department’s investigations of police department abuses, saying they diminish effectiveness.

Americans have mobilized extensively in the past three years against police brutality, militarization and corruption through the Black Lives Matter and related movements. Government officials at the federal level have responded to these demands by creating specialized task forces to recommend best practices, and investigating troubled police departments and enforcing reforms. Courts have also worked to roll back unconstitutional stop-and-frisk policies, while city governments have created independent oversight agencies and enacted robust community policing programs.

But will it stick?

My research on police reform in Latin America shows that such reforms are highly vulnerable to political reversals. These cases reveal how they can be quickly rolled back before they can take hold and demonstrate results.

Understanding the politics of police reform in Latin America may be informative for those who hope for changes in policing in the U.S.

Leaders in Colombia and Buenos Aires Province, Argentina, overhauled their police institutions in 1993 and 1998, respectively. These reforms were a response to rising crime rates, as well as pervasive police violence, corruption and ineffectiveness in fighting crime.

Only one year after reforms were passed, however, Ernesto Samper was elected president of Colombia. He vowed to undermine his predecessor’s dramatic overhaul of the National Police, saying his government would “let the police regulate itself.”

Similarly, in Buenos Aires Province, Carlos Ruckauf was elected governor in 1999. He left his predecessor’s police reform legislation intact. However, he made his preferred approach to crime-fighting clear: “we have to hit the criminals with bullets.”

Both politicians used citizens’ concerns over rising crime to lead calls for greater police autonomy, in order to be “tougher” on crime. Under their administrations, hard-fought police reform gave way to periods of “counter-reform.” These were characterized by increased police autonomy, weakened accountability, militarization, unchecked corruption and extrajudicial killings.

Other research on policing in Latin America has provided compelling evidence of the impact of such political rhetoric. When politicians promoting “tougher” police strategies are elected, police killings and repression of citizens increase.

These examples reveal how the long-term aims of police reforms can be difficult to reconcile with the short-term goals of politicians.

My research also demonstrates that police forces that are resistant to reforms have considerable power to undermine them. In Buenos Aires Province, police officials succeeded in dismantling a system of neighborhood security forums that allowed citizens to conduct oversight of police. Police officials felt the forums gave citizens too much control over police affairs. As a result, they lobbied the governor and security minister to reduce the funding and staff needed to implement them.

Related: Left, Right Or Center – The Police State Does Not Discriminate

By contrast, a similar participatory system in São Paulo, Brazil, has endured for three decades. There, police are incorporated into the governance structure of the community councils, allowing for a more collaborative relationship. As a result, many police officers have come to see forum members as their advocates. Although citizens in São Paulo do not have oversight authority, the police’s cooperation has contributed to the persistence of these participatory spaces.

Thus, reformers must identify and bolster police officials with a stake in sustaining reforms. Without support from insiders, reform is unlikely to last.

Police reform is also made vulnerable by the fact that, after reform passes, its proponents demobilize. In Buenos Aires and Colombia, human rights and activist organizations remained active when politicians began to reverse reforms. But the broadly shared societal outrage that led to reform in the first place dissipated. With it went the momentum needed to sustain reform in the long term.

Research from both the U.S. and Latin America has shown that campaigning for “tough on crime” policies, or “penal populism,” is a highly successful strategy for winning elections. As scholars have shown, such policies can generate broad support among a diverse set of voters. So-called “pro-order” coalitions, the collection of civil society organizations, media outlets and politicians that advocate for “law and order” policies, have similarly demonstrated great capacity to mobilize resources and public support.

Failing to sustain reform coalitions means there is little counterweight to these pressures.

‘Counter-reform’ in the US?

Is the U.S. entering a period of “counter-reform” similar to that observed in Colombia and Argentina?

Opponents of reform, including Sessions, warn of “a longer-term trend of violent crime going up.” They have also floated theories such as the “Ferguson effect,” the idea that growing scrutiny of police activity has made police more timid. Such arguments may scare voters into believing that police reform may make police less effective in fighting crime.

Meanwhile, President Trump has engaged in rhetoric similar to his Colombian and Argentine counterparts. As a candidate, he called on police to be “very much tougher” in fighting crime. As president, he has said his will be “a law-and-order administration” that will “empower” police.

It is too early to tell whether these police reform efforts will backslide. While the U.S. context differs in some ways from Latin America, these examples demonstrate that police reform is a continuous and contentious process that is difficult to achieve and highly prone to reversal.