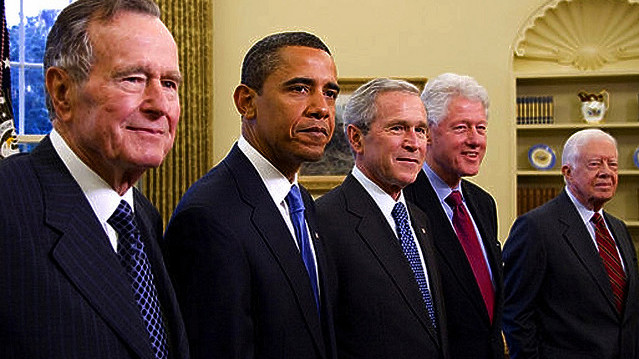 MINNEAPOLIS — Maybe you haven’t noticed, but Washington is occupied by neocons.

Seeking world domination, they’re steering the U.S. empire toward endless wars abroad. Back at home, they feed an illusion of freedom, democracy and choice presented by the two-party system.

They may seem like two distinct parties, but make no mistake: The Democratic and Republican Parties function more like a single party that promotes the interests of corporations, special interest groups and foreign governments — all of which profit from more war and human exploitation.

Perhaps nowhere are the similarities more striking than in the past two neocon administrations to occupy the White House.

The Grand Old Party’s George W. Bush declared the “War on Terror,” then gave the world the Iraq War, Guantanamo Bay, CIA “black sites,” and a drone program, among a host of other ills.

Seizing on the American people’s weariness of military adventurism and interventionism abroad, Barack Obama got himself on the Democratic ticket in 2008, campaigning on a platform of “change” and “hope.”

That change never really came to pass, though. Obama, a Nobel Peace Prize winner, dropped over 23,000 bombs on the Middle East in 2015 alone. Guantanamo remains open and Bush’s drone program across Africa and the Middle East has grown more deadly.

Obama even out-Bushed Dubya by expanding the “War on Terror” to benefit the military-industrial complex. He allowed for the strengthening of extreme right-wing militias and governments, the emboldening of Gulf monarchies and apartheid Israel, and the development of a foreign policy agenda that’s become increasingly aligned with al-Qaida.

Sure, the Iran deal was finally secured under Obama, but the Russian bear also re-emerged under his watch, with the destabilization of Ukraine re-igniting the Cold War and the nuclear arms race.

Here to talk more about the neocon Republicans and Democrats pulling the strings in Washington is Daniel McAdams, director of the Ron Paul Institute for Peace, a non-partisan initiative led by former politicians, policy advisers and even former Bush aides who oppose U.S. interventionism and work to educate the public about the neocon takeover of America.