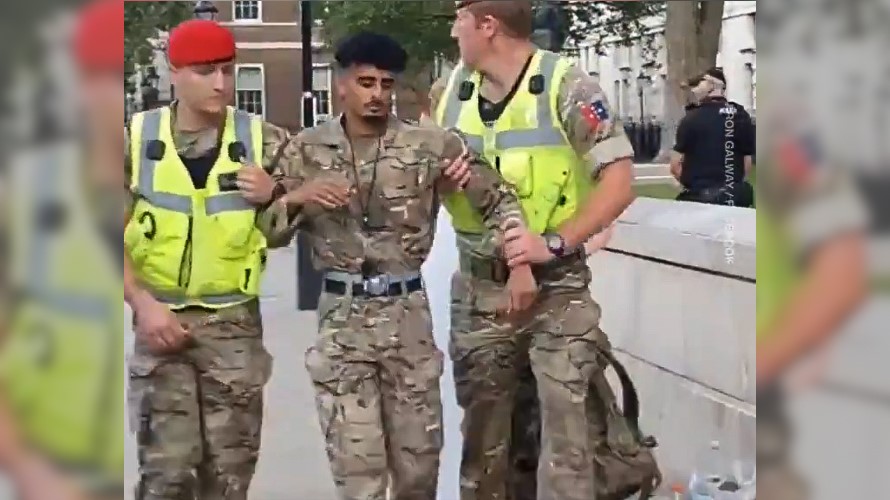 British soldier Ahmed Al-Babati has been arrested for opposing the United Kingdom’s role in the Saudi-led war against Yemen.

A British soldier has been arrested for opposing the United Kingdom’s role in the Saudi-led war against Yemen. Video shows Lance Corporal Ahmed Al-Babati of the Royal Signals being led away by military police from his protest outside Britain’s Ministry of Defense in London.

Ahmed has been taken in by the military police after 9 hours and 30 mins and 57 whistles later. A true hero. He is been kept by the military police and will be released within the few hours. His refusal to stay silent to the truth gained the respect and love of the people on social media and the people of London. A brave young man standing for Justice, with his head held high.

Al-Babati earlier released a video explaining his decision to risk his freedom rather than participate in what he feels is a grossly immoral war. “Our government continues to arm and support Saudi Arabia,” he said. “We tried to make our voices heard by protesting in London, Manchester, Liverpool and many other cities. We’ve even tried to email our MPs, but clearly our words mean nothing to [Prime Minister] Boris Johnson.”

I joined the army in 2017 and took an oath to protect and serve this country, not to be part of a corrupt government that continues to arm and support terrorism. What made this decision so easy for me and why I choose to sacrifice a lot of things including possibly my freedom is for the simple fact that me, myself as somebody that was born in Yemen, I could have easily fell victim to one of those air strikes or died out of hunger. I’ve seen enough not to speak out and I’d rather sleep peacefully in a cell than stay silent for a paycheck.”

Serving British soldier Ahmed al Batati is refusing to continue his military service until the UK stops arming Saudi Arabia which is pursuing a brutal war on his native Yemen. Al Batati has since been arrested by military police after demonstrating in front of Downing St. #Yemen pic.twitter.com/8EBpG7C8P3

Yemen is suffering through what the United Nations calls “the world’s worst humanitarian crisis,” the organization estimating that 14 million people — over half the country’s population — are at risk of famine, and 20.5 million need help accessing drinkable water. The situation is largely the result of the five year conflict, misleadingly labeled the Yemeni Civil War, which, in reality, is largely a Saudi-led struggle against the Houthi rebels, situated in the west of the country. Between 2014 and 2015, the Houthis overthrew the government of Abdrabbuh Mansur Hadi, with the Saudi government spending five years attempting to reinstall him as the leader of a united Yemen.

Eschewing diplomatic solutions or boots on the ground, however, the Saudis have largely resorted to sustained bombing campaigns, which have destroyed the country’s already limited infrastructure. A recent report from Oxfam calculated that there had been almost 200 air raids on hospitals, clinics, wells or water tanks since the conflict began in 2015, around one every ten days. As a result, Yemen is beset with twin epidemics of COVID-19 and cholera, their stretched medical system unable to cope with either. The war is estimated to have killed almost a quarter of a million people to date.

“It is clear this government has blood on their hands, so with that being said I refuse to continue my military service until the arms trade with Saudi Arabia has been put to an end. It is reported that a child dies every 10 minutes in Yemen, so I’ll be standing outside 10 Downing Street blowing a whistle every 10 minutes so that they can hear every time a child dies due to a war they continue to arm and support,” Al-Babati said. He was reportedly arrested after protesting for 9 hours and 30 minutes, blowing his whistle 57 times during that period.

The British role in Yemen’s anguish is well documented. The United Kingdom is a key ally of the Kingdom, supplying it with billions of dollars worth of military equipment. According to the Stockholm International Peace Research Institute, Saudi Arabia is by far Britain’s most important arms customer, responsible for 49 percent of total weapons purchases, buoying the booming industry. In addition, Britain has around 200 military personnel in the country, responsible for training, repairing and maintaining the Saudis’ costly warplanes, keeping the conflict going. Former Labour Party leader Jeremy Corbyn had promised to put an immediate end to U.K. sales to Saudi Arabia if elected. However, the Conservative victory in the December elections effectively put an end to the debate, sending the stocks of British weapons manufacturers soaring.

Al-Babati has now not been seen for two days, with the Army refusing to discuss the matter with the media. His fate remains unknown. However, Al-Babati clearly did not make the decision lightly and knew what his fate could be. In 2010, British soldier Joe Glenton was sentenced to 9 months in prison after he refused to return to Afghanistan on conscientious grounds. Whether Al-Babati is given the same treatment remains to be seen.

Feature photo | Screenshot from video posted to Instagram shows the arrest of Ahmed Al-Babati by Britsih military police outside of Britain’s Ministry of Defense in London.