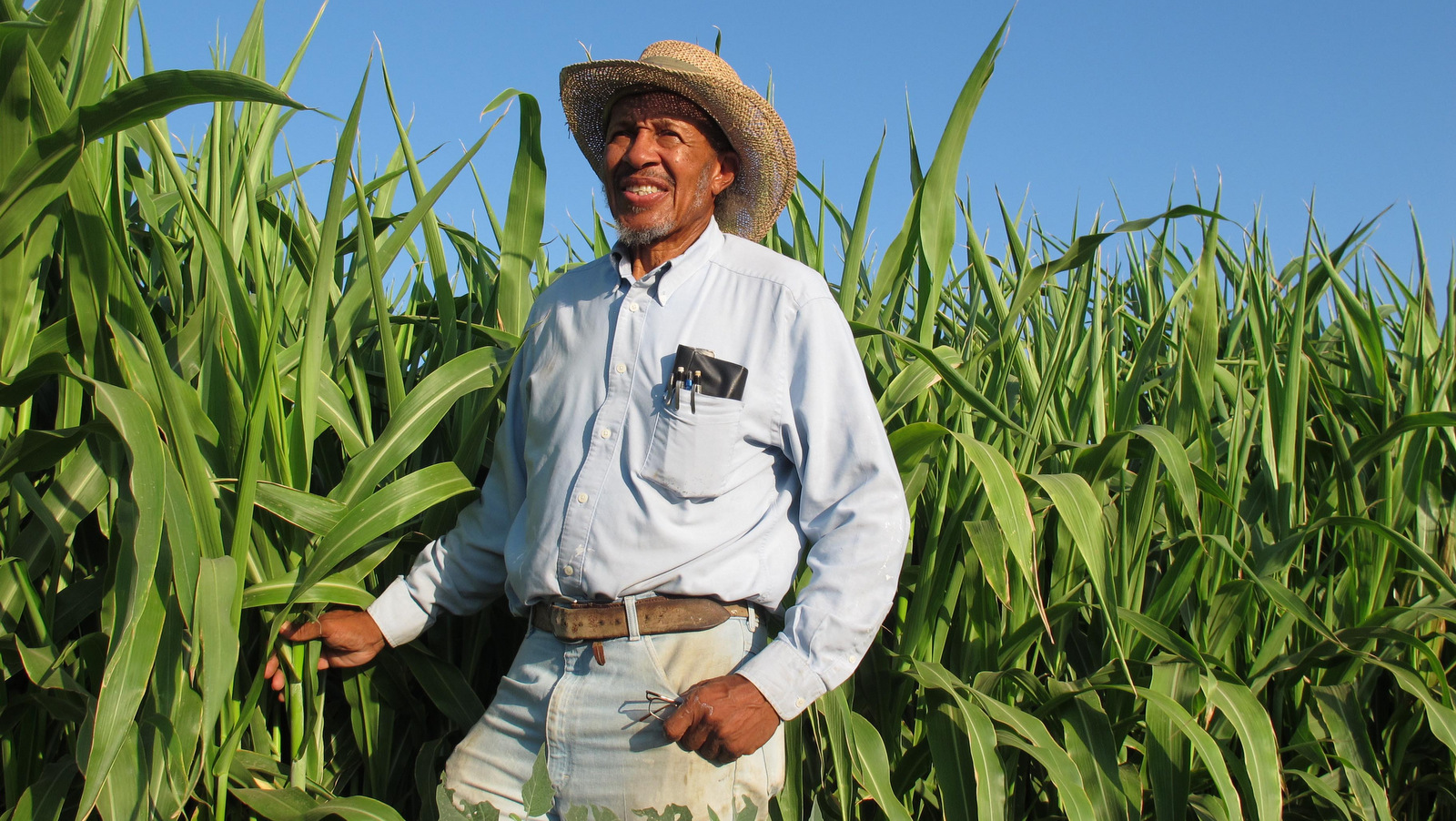 Will Scott, president of the African American Farmers of California, poses for a photo by the sorghum plants at the group’s demonstration farm in Fresno, Calif. on Thursday, September 15, 2011. (AP/GosiaWozniacka)

“It was almost as if the earth was opening up and swallowing Black farmers.”

This passage is from Pete Daniel’s book titled “Dispossession: Discrimination Against African American Farmers in the Age of Civil Rights.” It alludes to the untold acres of land seized from Black farmers and rural landowners over the last century.

Though African-American farmers currently comprise less than 2 percent of all farmers in the United States and only 1 percent of rural land is owned by African Americans, that situation was radically different shortly after the Civil War.

Africans were released into the bowels of a wretchedly racist society after having been enslaved for centuries in the United States. Four decades later, after organizing around the strategic need of land possession to build a better future for themselves and future generations, they managed to accrue some 15 million acres of land, mostly in the southeastern region of the country.

Land ownership by those Africans living in the United States, according to The Nation, served as farms, the primary occupation for most in the early 20th century. By 1920, 14 percent of all farms in the country, representing approximately 925,000 farms, were owned by Black people.

However, the impressive number of Black farmers and rural landowners would drastically decrease over the 20th century. During that century, so often touted as being a groundbreaking Black civil rights movement, some 600,000 Black farmers were forced off their lands. The Nation reported that by 1975, only 45,000 Black-owned farmers remained.

It should also be noted that in 1865, Gen. William Tecumseh Sherman of the U.S. Union Army issued Special Field Order 15, which allocated tens of thousands of acres in South Carolina and Georgia for the settlement of Africans who’d been enslaved in the United States.

Eric Foner DeWitt, professor of history at Columbia University, noted in a response to a New York Times article that two months after Tecumseh Sherman’s order, the U.S. Congress and Abraham Lincoln authorized the Freedman’s Bureau to divide the abandoned land into 40-acre plots for the ex-enslaved Africans to occupy.

However, the promise of a land base, like so many other promises denied to Indigenous groups in the United States, was never fulfilled by the government. Still, in 1994, 20,000 African-Americans had claimed tax credits based on the government’s refusal of land to former slaves.

All too familiar factors contributed to the seizure of farms and rural property owned by Black people over the last century. Some of those factors include: institutional racism practiced by the U.S. Department of Agriculture, which outright refused loans to Black applicants; terrorism practiced by the Ku Klux Klan, White Citizens Council, public servants, and other white supremacist groups and individuals whose actions forced Black people off rural properties; and a willful denial by the U.S. state and authorities to foster a climate of peace and stability for Black people to remain on rural properties.

Jim Crow, Black Codes and other forms of institutional and societal racism also factored into arbitrary seizure of land owned by Black people due to their lack of access to legal measures and the courts to properly obtain a title to the land.

Also, without having a will recognized by the state, the descendents of the land, instead of obtaining a legal title, would inherit the land as being heirs’ property.

Heirs’ property jeopardizes the integrity of the land, as it is jointly owned by many descendents, of which any one person can legally sell their portion of land or even auction the entire parcel, without obtaining joint consent of the other descendants, as long as that single person obtains a court order.

The Heirs’ Property Retention Coalition notes that unscrupulous property developers are known to solicit distant relatives who have no intimate relationship to the land, or limited understanding of ancestral land heritage, to entice them to sell their parcel for a fraction of its true value.

Once the property developer receives a title for just a small portion of the land, she or he can legally obtain a court order to auction off the entire plot for a massive profit.

The U.S. Agricultural Census reported in 2001 that an estimated 80 percent of Black-owned farmland in the south had disappeared since 1969. Roughly half of that land had been taken from African-American land owners as a direct result of partition sales.

“If the Kennedys, the Bushes, or the Clintons had their property sold under these circumstances, the law would have been reformed,” commented Thomas W. Mitchell, an expert in heir’s property at Texas A&M University of Law.

The land comprising Hilton Head, currently known as an elite golfing and resort destination, was once owned, almost in its entirety, by the Gullah people.

Descendents of West Africans residing in the U.S. states of South Carolina and Georgia, the Gullah have been able to maintain key aspects of their culture intact, including their language, culture and customs primarily because of land possession and a certain degree of isolation from the U.S. mainland.

Lorenzo Dow Turner, an African-American linguist, conducted research on the Gullah/Geechee language and concluded that it is related to Yoruba, Wolof, Twi, Bambara, Ewe and Garifuna. His book, “Africanisms in the Gullah Dialect,” continues to be a standard reference for African languages that survive in the western world.

Many people from the Gullah nation were forcibly displaced, with large swathes of their ancestral lands being sold at auctions due to minor partition sales.Whereas 90 percent or more of the population had been comprised of Gullah people, nowadays, after the arrival of Hilton Head cladding and its wealthy white vacationers, only 10 percent of Gullah people remain.

Whereas 90 percent or more of the population had been comprised of Gullah people, nowadays, after the arrival of Hilton Head cladding and its wealthy white vacationers, only 10 percent of Gullah people remain.

Alex Brown, a Gullah native commented that “the property that we owned was prime property.” He added that “over time, it’s been sold and traded and stolen.”