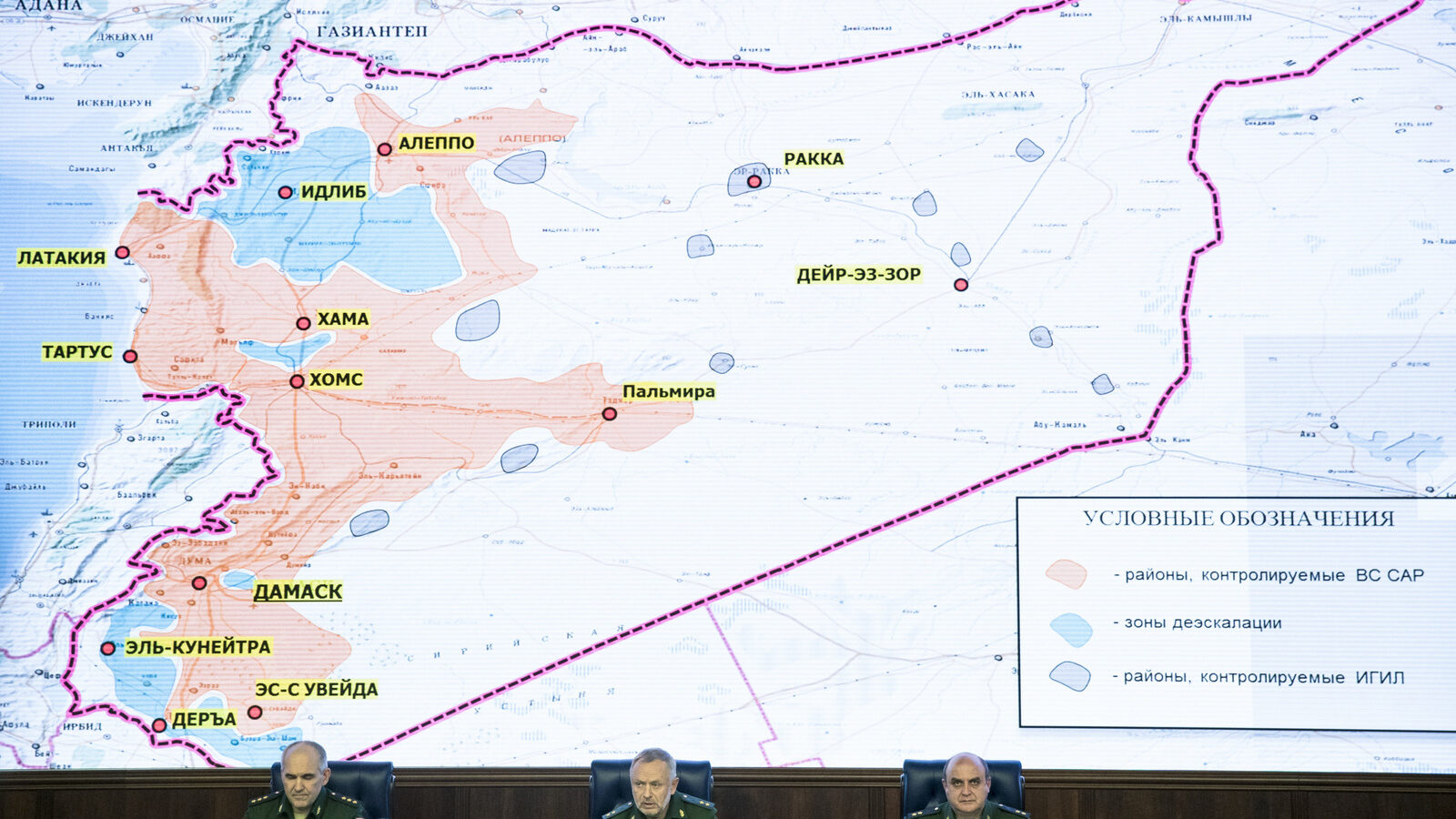 Russian generals attend a briefing in the Defense Ministry in Moscow, Russia, Friday, May 5, 2017. Russia’s military says the agreement setting up four de-escalation zones in Syria will go into effect at midnight. The military also says the deal, which was signed by Russia, Iran and Turkey in Kazakhstan the day before, could be extended to more areas of the war-torn country. The sign on top of the map reads Syrian safe zones. (AP/Pavel Golovkin)

(Analysis) — At midnight, May 5, a series of four “de-escalation zones” were implemented across Syria. According to the agreement, no warplanes will be allowed to fly missions in territories included in the designated safe zones, including Syrian, Russian, and American warplanes.

The largest safe zone is comprised of Idlib province as well as adjoining districts of Latakia, Aleppo, and Hama, an area that contains around 1 million people. Other “safe zones” are located in the northern part of Homs, East Ghouta, Daraa, and Quneitra. The “safe zones” are slated to exist for six months, with the options of extending them after that time.

Journalist and analyst with The Rabbit Hole, Sarah Abed, wrote,

The memorandum, which comes into effect on May 5, envisages the cessation of hostilities between the sides, conditions for returning refugees, the restoration of destroyed urban infrastructure and the access of humanitarian organizations. Moreover, the checkpoints to control the movement of civilians and the ceasefire regime will be created along the de-escalation zone borders.

Understandably, many observers are wondering just what is taking place in Syria since the United States has long argued for “safe zones” and “no-fly zones” in Syria since very early on in the conflict. Now, “safe zones” are being established in Syria at the behest of Russia, with the cooperation of Iran and Syria. So what exactly is happening?

On one hand, Russia’s “de-escalation zones” are essentially the same thing as “safe zones” and “no-fly zones.” For instance, they are geographic areas in which no aerial assaults will be allowed and no military flights are to take place. However, there is a notable difference between the zones envisioned by the U.S. and the zones being implemented by Russia.

First, the Syrian government has agreed to the Russian plan. Second, the U.S. plan for “safe zones” and “no-fly zones” was aimed at the destruction of the Syrian military and the ultimate invasion of Syria by Western NATO forces. It is also notable that the United States was not a party to the negotiation of the zones nor is it allowed to conduct military bombing missions within the zones. In a sense, it is a “no-fly zone” against the United States as well as against other powers.

That being said, the United States does not tend to fly over many of the areas encompassed by the new “de-escalation zone” plan, although it has done so in some isolated instances in the past. These air spaces are protected by Syrian SAM systems as well as Russian forces. The U.S. does fly over Idlib, however, and the Israelis tend to fly anywhere they wish, always confident that they can fight to the last American if Syria responds.

These “de-escalation zones” also have an expiration date of six months.

Zones Are A Plan To Free Up Syrian Military

One other notable difference in the plans set forward by the Russians versus the American version is the apparent purpose of the zones. It appears that the real reason for the establishment of the “de-escalation zones” is an attempt to allow the SAA to free up forces that can then be deployed to eastern and southern Syria so that they can eliminate terrorist activity in these areas, prevent Israeli and Jordanian troops from partitioning the southern and southwestern parts of Syria, and prevent ISIS and the U.S. from establishing their own partition in the eastern part. It is also an attempt to speed up the Syrian military’s progress in the race for Raqqa.

More importantly, the zones appear to be an attempt to free up Syrian military personnel to fight and retake Deir ez-Zour. If the Syrian military can once again reconnect Deir ez-Zour to the Tabqa airbase, which would allow for a more effective staging ground for military operations in the East and around the city. It would essentially alleviate the pressure consistently put on Deir ez-Zour for three years by the United States and its proxy army of terrorists. It would then allow for a stronger staging ground for the SAA to push west.

The Russian Defense Ministry has already announced that Russia will participate in the military operation to lift the siege of Deir ez-Zour. As al-Masdar News reports,

The Russian military will participate in the Syrian Arab Army’s (SAA) upcoming offensive to lift the two-year long siege on the Deir Ezzor Governorate, the Russian Ministry of Defense announced today.

The Russian Air Force will likely provide the primary air cover to the Syrian Arab Army in east Homs, while their military advisers embed with the latter.

This announcement from the Russian Ministry of Defense comes just hours after the Syrian Arab Army’s Tiger Forces arrived in the Palmyra countryside to begin this upcoming operation.

The military operation’s first target will be the desert town of ‘Arak, which is located along the Sukhnah-Palmyra Road in eastern Homs.

The Syrian military push east is an urgent necessity in order to foil the U.S./NATO/ Israeli plan to break up Syria and partition it as a result of foreign or terrorist forces firmly planted in specific regions backed by Western, Arabian, and Israeli funds and arms.

In addition, as Syrian analyst Afraa Dagher stated in an interview with Adam Garrie of The Duran, oil is also a major consideration both for the Western imperial powers and the Syrian/Russian alliance. She said, “The USA along with Jordan and Israel, worked hard to control the southern border of Syria and created mutual military rooms in order to restrain Syria’s anti-terrorist efforts. The US goal is to advance towards Deir AlZour which is rich in oil, and which is important for Qatar to supply its oil to Europe across the Syrian land, which will impact the importance Russian oil for Europe.”

Kevork Almassian of Syriana Analysis has released a video describing a similar analysis to my own, i.e. that the “de-escalation zones” are merely an attempt to free up Syrian forces, as a result of the ceasefire, to move east and push the U.S./Israeli/Jordanian/Terrorist forces back out of Syria before they can solidify their positions.

Despite the apparent strategic nature of the “de-escalation zones,” there has been no discussion as to how the prohibition against flight and bombing over these areas will be enforced. Will violating planes be shot down? Will the agreement fall apart if one party violates this aspect?

If the planes will be shot down, the next question is what, exactly, will happen if the United States violates the no-bombing provision? What will happen when the Israelis inevitably test the boundaries of the world’s patience? If Russia and Syria do intend to enforce the zones with shoot-down orders, will a shoot-down of an American or Israeli plane initiate the beginning of World War Three?

In the meantime, relative calm has ensued as a result of the ceasefire and implementation of the “de-escalation zones,” possibly signaling that the plan is working. However, the United States and its allies are not likely to sit idly by as their proxies are annihilated and other struggling terrorist organizations wither on the vine.

Only time will tell whether or not the Russian/Syrian strategy will ultimately lead to an end to the war and an actual deconfliction or whether the United States and its imperialist allies will push forcefully into a heightened state of conflict with another world nuclear superpower. We are obviously hoping for the former.