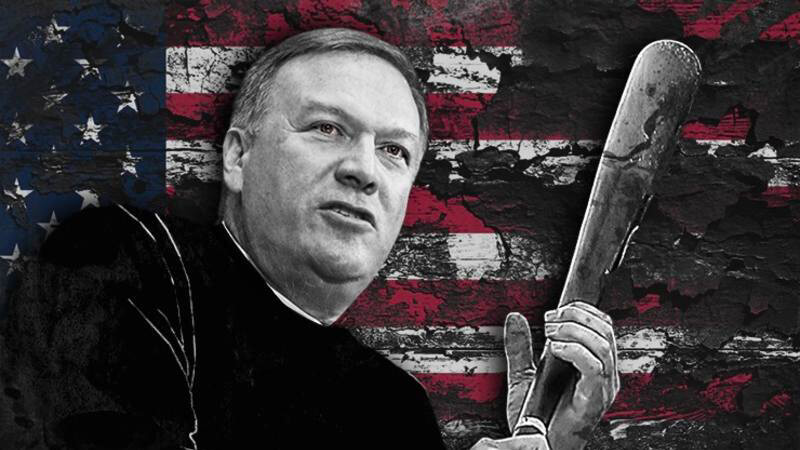 U.S. to International Criminal Court: We Will Break Your Legs

Well, not exactly like that, but in a way, yes. Now, finally, ‘the gloves are off’. The U.S. is openly threatening the historically timid ICC (International Criminal Court) and its judges. And unexpectedly, the ICC is hitting back. It refuses to shut up, to kneel, and to beg for mercy.

“The United States will withdraw or deny visas to any International Criminal Court personnel investigating possible war crimes by U.S. forces or allies in Afghanistan, Secretary of State Mike Pompeo said on Friday.

The court, which sits in The Hague, responded that it was an independent and impartial institution and would continue to do its work “undeterred” by Washington’s actions.

The Trump administration threatened in September to ban ICC judges and prosecutors from entering the United States and sanction funds they have there if the court launched a probe of war crimes in Afghanistan.

Washington took the first step on Friday with Pompeo’s announcement.

“I’m announcing a policy of U.S. visa restrictions on those individuals directly responsible for any ICC investigation of U.S. personnel,” Pompeo told a news conference in Washington.

“These visa restrictions may also be used to deter ICC efforts to pursue allied personnel, including Israelis, without allies’ consent.”

And so it goes… Mike Pompeo’s arrogant facial expression appeared above countless reports and it said it all: the world has to listen to the U.S. dictates, or else!

Naturally, there is logic (even if twisted) behind the U.S. threats. This is an extremely dangerous slope!

No country in the post-WWII era has committed so many crimes against humanity, and supported so many genocides, as the United States of America. And in summary, no other part of the world has murdered more people on our planet, than Europe. And most North Americans are descendants of the Europeans. The ‘foreign policy’ of the U.S. is directly derived from colonialist policies of the former European powers. Therefore, crimes against humanity committed by the West have never stopped; never stopped for centuries.

This simple fact had been hushed up: never really openly discussed by the mass media outlets, in classrooms, or in the courts of law.

If the ICC begins and is allowed to investigate crimes against humanity committed by the West, the entire twisted concept of the U.S. and Europe being pioneers of freedom and democracy could easily and quickly collapse.

Even criticism by Washington, Paris or London of countries such as Venezuela, China or Russia, for their “human rights violations”, would become absurd and grotesque. Entire concept of ‘regime change’ could clearly be exposed for what it always really was – lawless gangsterism.

The U.S. rulers are well aware of the fact that this is ‘extremely bad timing’ for the Empire to allow challenges from some at least marginally independent international bodies.

They try to break all dissent. Like when in 2018, the U.S. and its close ally Israel left the at least partially rebellious intellectual body of the U.N. – UNESCO.

The West is clearly losing the ideological war, and it is panicking. And the more it panics, the more aggressive it gets.

One country after another is being defined as ‘undemocratic’ and designated for ‘regime change’. The methods are different. There are soft coups which have succeeded in overthrowing left-leaning governments in Argentina and later in Brazil. And there are hard methods used by the Empire in and against Afghanistan, Syria, Venezuela, Iran, Yemen, big parts of Africa, Nicaragua and North Korea.

The West openly supports genocides in the Democratic Republic of Congo (DRC), in West Papua occupied and plundered by Indonesia, in Indian occupied Kashmir, as well as the apartheid perpetrated by Israel.

The ICC is now concentrating on the crimes against humanity committed by the United States in Afghanistan, where at least 100,000 died as a result of the near two decades of NATO occupation. These crimes are real and indisputable. I have been working in Afghanistan and could testify that the West (and particularly the U.S. and U.K.) brought this proud country into a despicable state.

But Afghanistan could be just the beginning; a proverbial Pandora box could open from there.

Most likely, if they take place, the trials against the U.S. and its crimes, would not right away prevent the terror the West is spreading all around the world. But they would open discussion, at least in the countries that have been victims of terrible injustice. Such trials would also help to realign the world: definitely towards Russia and China, and back towards socialism in Latin America and most likely in Africa and parts of Asia.

Pompeo’s speech was so extreme that it could be easily defined as counter-productive for the Empire.

Even the mainstream Western press had to react. Even the Western ‘human rights organizations’ felt obliged to protest.

Human Rights Watch called it “a thuggish attempt to penalize investigators” at the ICC.

“The Trump administration is trying an end run around accountability,” it said. “Taking action against those who work for the ICC sends a clear message to torturers and murderers alike: Their crimes may continue unchecked.”

Amnesty International described the move as “the latest attack on international justice and international institutions by an administration hellbent on rolling back human rights protections.”

The American Civil Liberties Union, which represents three people before the ICC who say they were tortured in Afghanistan, called the decision “misguided and dangerous” and “an unprecedented attempt to skirt international accountability for well-documented war crimes that haunt our clients to this day.”

A great part of the world is already horrified by the latest attacks of the West against Venezuela, and by attempts to push countries like China, Russia, and North Korea towards military conflict.

Such a barefaced shove for impunity will not go well in many parts of the world.

It was always understood that the West has been forcing the planet to accept its ‘exceptionalism’. But it was understood only or predominantly by a well-informed minority of the people.

The latest headlines will be reaching the masses, on all continents.

Mr. Pompeo made one huge tactical mistake. He touched the ‘big topic’ that was always supposed to be ‘understood’ but unpronounced. Now it is out in the open.

The next step could be the acknowledgment that international law does not apply to the West.

Once this undisputable fact is pronounced, what may follow could be an outrage, and finally, refusal to accept the status quo, at least by several countries, and by billions of people worldwide.

It appears that the Empire has gone one step too far. As a result, paradoxically, its impunity could be really in jeopardy.