NEW YORK — President Donald Trump plans to request a massive shift in funding from the civilian sector to the military in his first budget proposal to the United States Congress.

“President Trump’s budget would pay for a 54 billion dollar increase to defense — relative to legally-mandated budget caps for for fiscal year 18 — by decreasing funding for diplomacy, environmental protection and other domestic programs by the same amount,” said Erica Fein, nuclear weapons policy director at Women’s Action for New Directions.

The proposal, expected to arrive in Congress by mid-March, would boost military spending to 603 billion dollars in fiscal year 2018, following slight decreases during the Obama administration.

It would also call for sharp cuts in diplomatic and domestic spending, reducing State Department funding by 37 percent and cutting the Environmental Protection Agency’s budget by 25 percent.

“The budget would invest in weapons, including an already excessive nuclear arsenal, while divesting in programs for working families,” Fein said.

“In this way, if Trump gets his way on even part of his budget proposal, we could see increased instability and more extremism in the world with only military solutions to address the problems, and more poverty and a faltering economy at home,” she added.

Fact-checkers have noted that Trump’s proposed increase, while significant, is hardly as “historic” as he claims, rising only 3 percent over former President Barack Obama’s military spending this year.

The plan is “in some ways more of the same,” said Ruth Benn, coordinator of the National War Tax Resistance Coordinating Committee. “High military spending, and everything else splits the crumbs.” 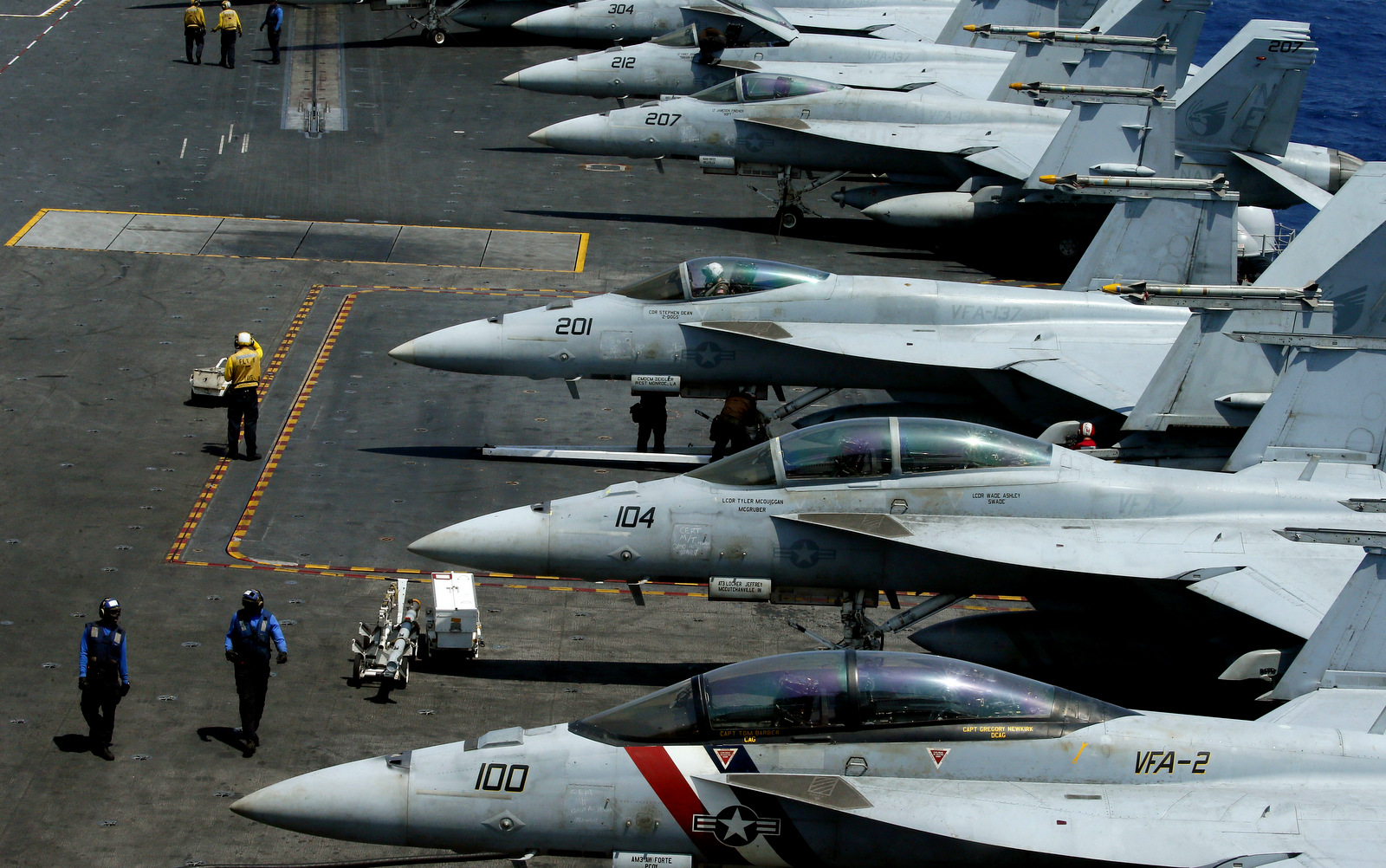 A row of F18 fighter jets on the deck of the U.S. Navy aircraft carrier USS Carl Vinson (CVN 70) is prepared for patrols off the disputed South China Sea Friday, March 3, 2017. (AP/Bullit Marquez)

The shift would mark a sharp return from the “soft power” of covert intervention, diplomatic maneuvers and proxy wars favored by Obama to the “hard power” of tanks and warplanes.

Critics fear that it would also undercut pressing domestic needs while reorienting U.S. policy toward military strategy, setting the country on a path likely to result in future conflicts.

“If it does become law, it will increase the dangers of nuclear war and catastrophic climate change,” said Miriam Pemberton, a research fellow at the Institute for Policy Studies.

“The budget as proposed is not going to pass ‘as is,’ since it is unrealistic and will not get enough support in Congress,” said John Tierney, who represented Massachusetts’s sixth congressional district in the House of Representatives from 1997 until 2015. He is now executive director of the Council for a Livable World and the Center for Arms Control and Non-Proliferation.

Tierney said the current proposal “would weaken our economy substantially, adversely affect relationships with allies, friends and adversaries alike, and encourage military approaches to problems instead of diplomatic efforts, with expected negative consequences for peace and security, in a national security and in a domestic economic sense.”

Cuts To Domestic Funding Would Have Negative Impact Within the U.S., the budget’s domestic funding reductions would cast a long shadow.

“Here at home, states get, on average, 30 percent of their budgets from federal sources,” said Lindsay Koshgarian, research director at the National Priorities Project. “Cutting domestic spending by 10 percent would trickle down and would be felt by every community in the United States.”

The measure’s simultaneous boost in military spending and downgrading of diplomatic efforts could work in tandem to increase the risk of conflict, she added.

“It could degrade relationships with both allies and rivals, since we would be spending less on diplomatic outreach. And it is possible that with [the] built-up military, there would be more temptation to use it,” she said.

“As it is, the United States already spends 21 times more on our military than on the Department of State,” Koshgarian said. “Foreign aid is only 1 percent of our federal budget.”

Dead On Arrival? Trump’s Measure May Not Pass Muster “In order to pass this budget, Congress would have to revise the Budget Control Act of 2011,” she said.

A provision of the law requires parity between cuts to military and non-military spending, the exact opposite of the rationale behind Trump’s proposal.

It will remain in effect until 2021 unless both houses of Congress, including 60 Senators, eight more than the current Republican majority of 52, vote to overturn it.

“With opposition from Democrats and possibly some Republicans, [overturning the law] is very unlikely,” Koshgarian said. “More likely is that Congress will work out something that looks more like the military and nonmilitary spending levels we have now, and that they will continue to stuff extra military spending into a Pentagon slush fund known as Overseas Contingency Operations that is not subject to the Budget Control Act.”

Tierney said that while Congress might ultimately agree to higher military spending, it would likely do so more tactfully.

“Despite the wastefulness of it all, politically Congress may well support military spending increases that are unwise and unnecessary, but will similarly be politically cautious about taking a meat clever to programs and expenditures now relied upon and viewed favorably by constituents,” he said.

Fein agreed that the budget had little chance to pass Congress intact.

“Republicans and Democrats alike have said that the Trump budget proposal is dead on arrival, so the budget is likely to change significantly,” she said.

“Both parties seem to want, or at least would accept, an increase to the Pentagon budget. But there’s not agreement on how to get there,” she added. But for an administration that puts so much effort into its message projection, the budget’s chance of passage may be a secondary concern.

“It immediately boosted the stock price of the major defense contractors,” Ghanem said.

“And it added to the impression around the world that the new administration is trying to build ‘Fortress America’,” she added.

Like many of his other policies, Trump may believe that his budget proposal will reorient the U.S. from its Obama-era role as a multilateral dealmaker to that of a standalone superpower, while also cementing his own role as a respected national leader.

But by attaching the perennial issue of runaway military spending to his own historically unpopular administration, he may have opened a path for broader consideration of longstanding, bipartisan U.S. policies and their domestic and international effects.

“I think it’s important to address whether or not the United States has a need for more military spending,” Koshgarian said.

And with Trump claiming an issue formerly taken for granted by both major parties as his own, the debate may come sooner rather than later.