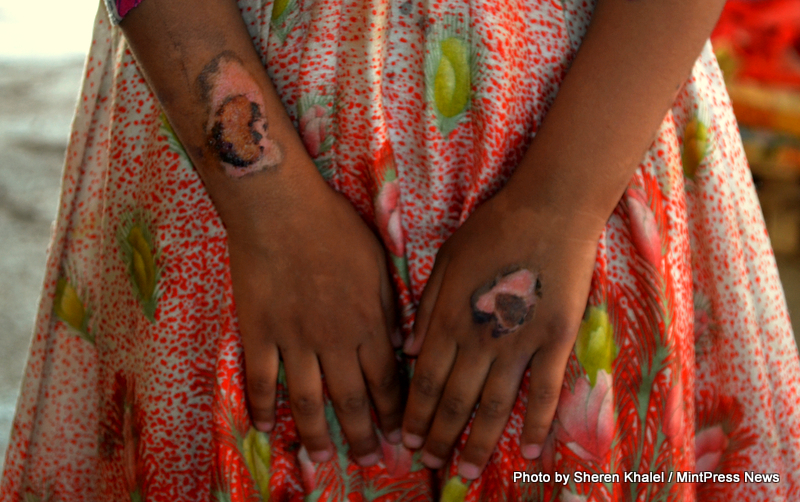 Torment Continues For Yazidis After Escaping The ISIS

DOHUK, Iraq — Maheza Hadida sits cross-legged on the rough concrete floor, her youngest son cradled in her arms, two toddlers tucked in at each side, and a makeshift cot assembled from mismatched pieces of discarded wood beside her.

Her children are without their father — he was captured by the ISIS when the group invaded Sinjar early last month. The jihadist militants massacred hundreds in the majority Yazidi city. Hadida doesn’t know if her husband is dead or alive. She and her children escaped, fled to the mountains, and, via a hazardous path through war-torn Syria, eventually found their way to the city of Dohuk in the Kurdish Autonomous Region.

“All of us were walking, people who couldn’t continue walking stopped and died on the way, we had no food and water, we couldn’t help them. Our situation was bad before, and I don’t think it will get better,” Hadida solemnly told MintPress News.

Home: Beneath the sun and on concrete floors

Now, their home is the concrete foundations of an apartment block, where they live alongside 60 other families from Sinjar. There are no walls – interior or exterior – just gray concrete pillars, and a floor that has cliff-like edges to the construction site below. Hadida has managed to secure a space in the middle of the floor, ensuring she and her children are less exposed to the elements, particularly the unforgiving and sometimes unbearable heat from the sun.

Some of the residents of this makeshift refugee community still bear the scars of intense sunburns from days spent exposed on the Sinjar Mountain. Many children’s hands and arms remain red, raw and bleeding.

Hadida’s children’s sunburns have healed, but they remain ill. Clean water is virtually non-existent, food is scarce, sanitation facilities are just a dream. Some of the refugees have dug wells in the nearby mountains in an attempt to bring in a supply of water – they have succeeded, but the water is unclean and diarrhea is now commonplace. Some local families in Dohuk have provided bottled water and food, but these donations are hardly sufficient to support their needs.

“We need people to help us, we are poor, we have nothing, no food, no clean water,” Hadida continued while rocking the crib beside her slightly. “I don’t even have shoes to walk in. This situation is really bad. I don’t know what will happen to us. People are getting ill, my children are ill. How can they get better when we have nothing to give them?”

A people forgotten by the world

The refugees who inhabit this building have been here for four weeks. Many told MintPress that the United Nations had visited just once, and only to take photos and ask some questions. That was in mid-August, and they have yet to return.

After garnering world attention in the media during their plight at the hands of ISIS in SInjar, many of the Yazidis who have found refuge in Dohuk feel they have been abandoned.

“We have been forgotten about,” Hadida lamented. “We survived the ISIS trying to kill us all, and now we have to struggle to live again. Maybe it is because we are poor, or because our people are only a small number that nobody cares about, I don’t know where the world is.”

Tens of thousands of Yazidis who survived Sinjar and the ISIS now populate the abandoned and half-constructed buildings of Dohuk. The main highway is dotted with wearied faces and exhausted bodies — people waiting for their luck to turn after a month of turmoil, grief, and homelessness.

Fared Saidi and 16 members of his family — all of whom managed to make it out of Sinjar, through Syria, and to Dohuk — occupy the first floor of a building near the center of the city. The building is impossible to miss on the way into the city center, and so is Saidi’s family as they sit completely exposed in a half-constructed building on the side of the main road. Every member of Saidi’s family has a warm smile, but their smiles don’t mask their grief and utter exhaustion. Like the 80,000 other Yazidis that have survived the horrors of the ISIS and taken refuge in Dohuk, their struggle has not yet ended.

“We found this place, and we saw it was empty,” Saidi told MintPress while pointing out the spots on the floor where each person sleeps. “Before we were sleeping in the street, and before that we tried to go to the refugee camp but they said no, it was too full of people. All these countries in the world want to help fight the ISIS, but no one wants to help us. We don’t have enough water or food, we have nothing. All we have are the clothes we are wearing now.”

Surrounded by his family, Saidi speaks in a friendly but resolute tone. He is under no illusions. Life has always been hard for him and his family, who he says have always been poor, but their situation has never been as bad as it is now. His elderly mother, sitting painfully and awkwardly on the concrete, shows her feet which have been blistered and scarred from the siege on Sinjar Mountain and the hazardous walk through Syria to Dohuk. She stoically attempts to cover up her discomfort, but with constant back pain as well, she wishes for medical supplies to alleviate some of her pain.

A desperate call for help

Saidi and his family have limited supplies of food and water, supplies that only exist out of the goodwill of the local community. They have received no aid, supplies, medicine, or shelter from aid organizations, and Saidi says aid organizations, including the U.N., which has an office in the city, have never visited the complex. This is despite the family’s dire situation being clearly visible to anyone travelling in and out of the large Kurdish city of Dohuk.

“We want America to help us, to finish our situation here,” Saidi said. “Every day on the mountain when people were dying around us, we thought every morning when we woke up that America would come to save us and no one came. The U.N. has done nothing for us now, none of the aid organizations have, we have never seen them. All we need is some small help, this is no life here.”

The media has spoken to his family before and their situation remains the same, he bemoans, the frustration apparent in his voice. Saidi knows the world had its eyes on the Yazidis during their plight in Sinjar last month, but now he feels abandoned, as though the world and media have moved on, while he and his family can not.

Saidi worries about what the future may hold. He and 16 members of his family made it out of Sinjar alive, and his only hope in the coming months is for that number to remain intact.

“We have nothing, soon winter is coming and we don’t know what we will do then, the children have no clothes for the cold weather and we live exposed and outside. I think things will only get worse for us. We just have to try and survive as best we can.”