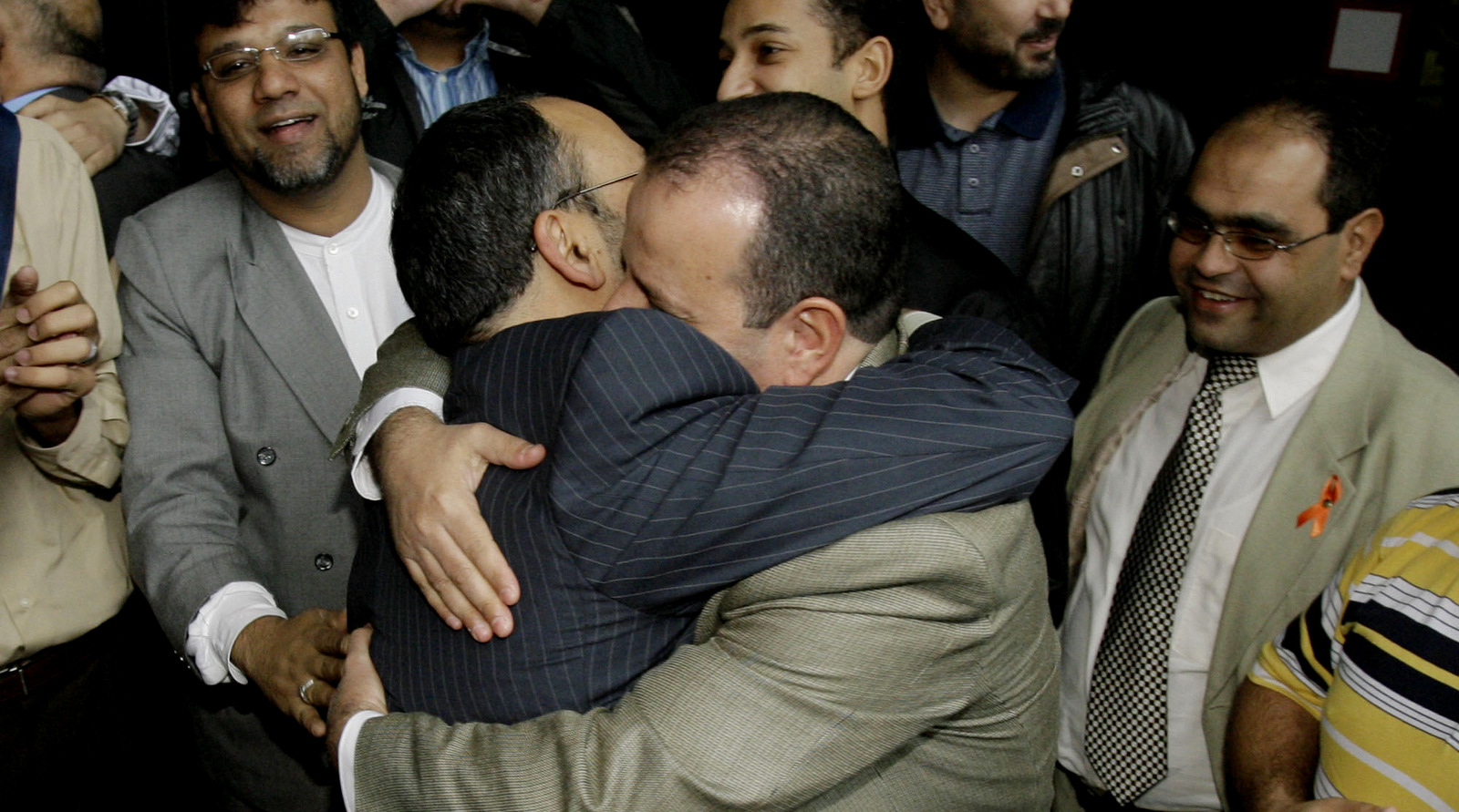 Bush’s accusations were not supported by any evidence but the president spoke and so the government had to act. The FBI raided the HLF offices in Dallas and seized their financial records, database, wire transfers, donor lists, and correspondence, freezing all their assets. Yet the government came up with no evidence linking HLF to Hamas.

The Holy Land Foundation was the largest Muslim charity in America. It provided aid to refugees, orphans, victims of human and natural disasters, the poor and the needy throughout the world, regardless of faith or political affiliation. According to Mohammad Abumoharam, a relief worker in Gaza, “HLF has been able to significantly alleviate the suffering of thousands in Palestine.”

HLF also provided relief in New York after 9/11, the Oklahoma City bombing, flooding in Oklahoma and Iowa, the LA uprising, tornadoes in Texas; and they provided relief for the needy in Paterson, NJ. They were also in Turkey, India, Bosnia, Kosovo, Chechnya, Mozambique, Lebanon, Jordan and Palestine to do what they could to help the needy in times of crisis.

The raid and prosecution of the HLF-5

An easel with child’s drawings is confiscated from the eastern offices of the Texas-based Holy Land Foundation for Relief and Development as U.S. Customs agents stand guard in Paterson, N.J., Dec. 4, 2001. (AP/Mike Derer)

Then, at precisely 7 a.m. CDT, on July 27, 2004, the homes of Shukri Abu Baker, Ghassan Elashi, Mufid Abdulqader, Abdulrahman Odeh, and Mohammad Elmezain were raided by local and federal officers. All five men, who came to be known as the HLF- 5, were taken into custody. Four years and two trials later, all five were sent to federal prison, serving sentences ranging from 15 to 65 years.

Accusing charity organizations that support Palestinians of “funding terrorism” requires a great deal of creativity but also a certain amount of collaboration between the legislative, executive, and judicial branches of government. John Boyd, one of the attorneys who represented the HLF in the cases that were brought, told me he felt that “all the rules that have been put in place to protect innocent people had been suspended in this case,” and that the judges who were involved, “abdicated their duties to uphold the law and defend innocent people.”

In the Holy Land Foundation case there were several points at which this inter-branch collaboration was evident. In 1992, Congress passed U.S. Code 2333, the Civil Remedies Law, which says that any national of the United States who is injured as a result of an alleged act of terrorism may sue any person or organization that is suspected of funding a terrorist group.

In January 1995, President Bill Clinton signed Executive Order 12947, which states that conducting any transactions with terrorists who threaten to disrupt the Middle East peace process is illegal. In the annex to this executive order, Hamas was designated as one of these organizations.

Shortly after this executive order was signed, Ghassan Elashi, the pro-bono chair of HLF, along with other leaders of Palestinian-American and Muslim-American organizations, initiated a meeting with high-level Treasury Department officials to enquire with which Palestinian organizations they were still permitted to work. A sheet of paper found in Mr. Elashi’s office — which was later raided by the FBI — contained the names of all the participants in that meeting. It included Treasury Department officials like Richard Newcomb, the head of Treasury’s powerful Office of Foreign Asset Control (OFAC); and Bob McBrien, who later testified about this meeting in the HLF trial; among others. Though these officials were asked to provide guidance, no guidance was provided by OFAC at this meeting or at any other time.

Thus, even though no proof was ever found, much less provided, that HLF was funding Hamas, the legal structures put into place in the 1990s by Congress and the Clinton administration allowed the government to pursue the HLF.

HLF sued the government demanding that their assets be unfrozen and their designation as a terrorist organization rescinded. When a government agency decides to freeze the assets of an organization, it is required to prepare an Administrative Record to present the evidence, and the law gives the organization the right to contest this evidence in court. According to Boyd:

In the Administrative Record there was not a single statement under oath, no verifiable translations of documents, and no evidence whatsoever that HLF was the fundraising arm of Hamas.”

Guadalupe Gonzalez, of the FBI, addresses reporters regarding the investigation into the The Holy Land Foundation for Relief and Development, July 27, 2004, in Dallas. (AP/Tony Gutierrez)

HLF, on the other hand, had sworn affidavits and statements under oath that all translations of documents were true and correct. Since the Government of Israel provided much of the prosecution’s evidence, the original documents it provided were in Arabic or Hebrew and then translated into English; so the translations were a crucial issue. In one case, the government claimed that there was a statement made by the HLF office manager in Jerusalem, Mohammad Anati, in which he swore HLF did give money to Hamas. However, the HLF lawyers had the original statement translated and it turned out he said the exact opposite — no money was given to Hamas.

Another claim made by the government was that HLF had an orphan support program that supported the children of Hamas terrorists. The government had a list with names and photographs of the orphaned children. “It turned out that out of the entire list of 70 or 80 names, only three had fathers who died as a result of what one would call terrorism,” John Boyd told me. They had apparently died when a bomb they were preparing blew up in their hands. Eleven of the other fathers were killed by Hamas for being collaborators. “And so,” John Boyd said, “that claim was ridiculous.”

I asked several of the attorneys who worked on this case and tried to defend the HLF-5 whether they think there was a conspiracy. They all said no. John Boyd added:

We were absolutely confident, and correctly so, that these people had done nothing wrong. What we didn’t expect is that in the U.S. you can take the most frivolous charges against any Muslim or Arab and the presumption of innocence goes down the garbage.”

What followed was a criminal case in which the government — relying heavily on documents and two anonymous witnesses provided by the government of Israel — tried to show that, while HLF did not give money to Hamas directly, it did provide them with material support through local Palestinian charity organizations called Zakat Committees. According to Ed Abington — former U.S. consul general in Jerusalem, who also testified on behalf of HLF — “The United States has never labeled Zakat Committees as controlled by Hamas or as being a terrorist organization.” In fact they were vetted and USAID, the Red Cross, and other international aid organizations worked closely with these committees.

In the HLF trial, attorney for the defense John Cline questioned Dr. Matthew Levitt and Bob McBrien of OFAC, both witnesses for the government. In the course of their testimony it was revealed that all that is needed for the government to designate a person or organization as a “Designated Terrorist” is a “reasonable belief.” Not proof beyond reasonable doubt or proof by a preponderance of evidence, as you have in court, but a “reasonable belief” that the person or organization committed, or posed a significant risk of committing, acts of violence with the purpose of disrupting the Middle East peace process. In other words, the government does not have to abide by any particular rules of evidence.

Upon further questioning of Levitt by Cline, it was made clear that there are two principal lists that the U.S. government maintains that include all the designated terrorists organizations. One is maintained by the Treasury Department and one by the State Department. The Zakat Committees were not listed anywhere. Still, after two trials, the five men who came to be known as the HLF-5 were convicted of material support for a terrorist organization, Hamas, and are serving sentences as follows: Shukri Abu Baker, 65 years; Ghassan Elashi, 65 years; Mufid Abdulqader, 20 years; Abdulrahman Odeh, 15 years; Mohammad Elmezain,15 years.

It was a seamless cooperation between all three branches of government: Congress passed laws, the president signed executive orders, and the judges convicted.

Feature photo | Shukri Abu Bake and Abdulrahman Odeh hug after a mistrial was declared in the Holy Land Foundation trial at the federal courthouse, Oct. 22, 2007, in Dallas. (AP/Matt Slocum)