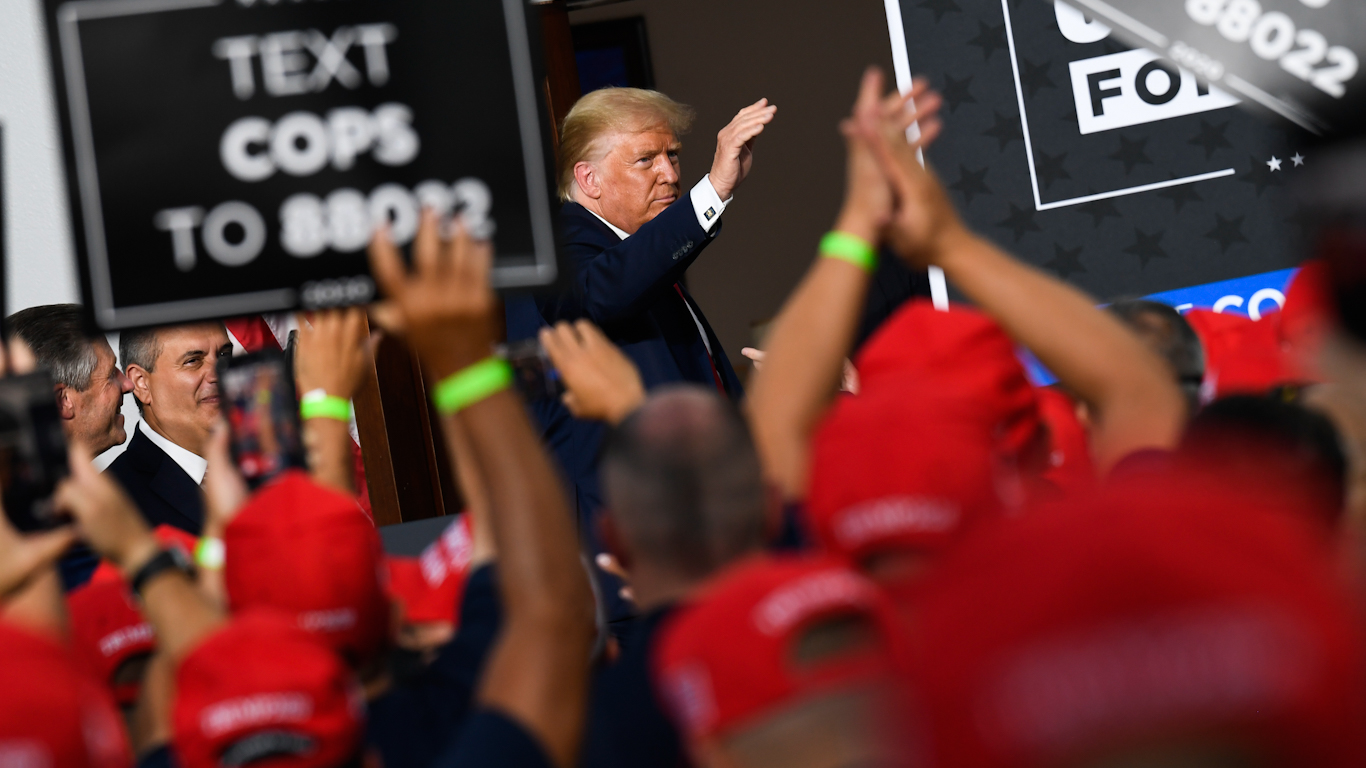 Should Trump fail to carry the Electoral College, Noam Chomsky admonishes, “he could send Blackshirts out in the streets… preparation for a plan to try to bring the military in to carry out something which would amount to a military coup.”

A New York Times columnist opines: “Put nothing past Trump, not even the destruction of the American electoral process.” Robert Weissman, president of Public Citizen, explains that Trump’s election delay threat is a coup in the making. Economist Jack Rasmus speculates Trump will “call for his radical right, gun-toting friends to come to Washington to surround and protect the White House.”

The left World Socialist Web Site joins the liberal chorus: “In an act unprecedented in American history, Donald Trump has repudiated the Constitution and is attempting to establish a presidential dictatorship, supported by the military, police and far-right fascistic militia acting under his command.”

Meanwhile, in the real world, more than 51 million Americans have filed for unemployment since March. Some 27 million people have lost their health insurance on top of around 30 million who were uninsured before, in the face of the massive pandemic. The Federal Reserve has pumped $7 trillion into corporate bonds, municipal securities, loans and grants to business, while millions are going hungry. The pandemic death toll in the U.S. is 168,345 as it rages out of control. California cannot even accurately count the number of cases being reported.

The U.S. is experiencing the greatest combined health and economic crisis since the founding of the republic. But instead of demanding solutions, the overriding liberal-left concern of this presidential campaign season is the specter of a Trump coup, quickly forgetting the issues that Bernie Sanders ran on.

Fascism as a personality disorder

The idea that the “visibly overweight and dementia-plagued” “orange pig,” in the florid words of Paul Street, could by personal will change the form of governance in the U.S. from bourgeois democracy to fascism is based on a “great man” concept of the course of history, where a single individual determines all.

“There’s no doubt that the Trump malignancy runs deep,” Chomsky explains, “and that he is drawn to fascist symptoms,” describing Trump’s proclivity to fascism as a personality disorder.

Obscured by this concentration on Trump’s personality are the social, economic, and political conditions for a fascist transformation.

In Europe of the 1930s, sections of the ruling class in their respective countries accepted Hitler’s and Mussolini’s dictatorships for fear of working-class Communist and Socialist parties coming to political power. There is no such political contention in the contemporary U.S. Rather, some half of the eligible electorate does not bother to vote because they do not see their interests represented by either wing of the two-party duopoly. The other half trust that they live in a genuine democracy with real political choices.

The U.S. ruling class can impose their rule on the popular classes because the latter are either inactive or believe they are represented. If rule by and for the elites is accepted, why should the bourgeoisie squander this gift and opt for a more costly fascist dictatorship?

Even if Donald Trump personally would aspire to be the first U.S. führer, he does not have sufficient backing from the ruling class, notably finance capital. Many military generals detest him. The foreign policy establishment does not trust him. At least half of the active-duty service members are unhappy with him. And the so-called deep state security agencies – FBI, CIA, NSA – are among his harshest critics

Trump might be able to mobilize some skinheads with gun show souvenirs. But these marginalized discontents would hardly be a match to the coercive apparatus of the world’s superpower.

Fellow party members, such as the Lincoln Project and Republicans against Trump (RAT), can’t stomach Trump. Romney has bailed, W isn’t far behind, and the polls indicate a landslide defeat in November. Even if Trump were doing everything right, not the opposite, no incumbent president could survive a spectacularly tanking economy plus a pandemic. Bottomline, Kamala Harris and what’s-his-face will be the new 1600 Pennsylvania Avenue neighbors.

However…while a one-man coup can be dismissed, an “October surprise” in the form of a military adventure cannot. There’s nothing like a dandy little war (say a coup in Belarus) to boost a sitting president’s approval ratings 15 percent and put him over the top in November. With U.S. warships cruising for trouble in the South China Sea and the Democrats egging Trump for being soft on Beijing, even a dustup with nuclear-armed China cannot be ruled out.

The obsession with the person of Trump is a testament to the political bankruptcy of the increasingly anemic successors of the New Deal and their epigones on the left who, every four years, admonish us that never before have the stakes been so high: we have to vote for the lesser evil. Given their view of the danger of a fascist coup, we should put aside a progressive agenda and vote for the former senator from Mastercard and learn to love endless imperial war and increasing austerity for working people in a repressive security state.

The liberal-left pundits reproach us to vote Democrat simply because the alternative is not Trump. Recall similar warnings about Bush and Romney, who are now chums of Democrats in high places. Vote, but not for any issue, because the so-called liberal agenda is today devoid of issues. Liberalism is dead. Indicative is its standard-bearer barely showing vital signs. Biden is being told to stay in his basement and even sit out his nominating convention.

The Democratic National Committee (DNC) killed the one hope – a genuine one – that liberalism had. Bernie Sanders knew that the DNC had rigged the 2016 contest against him and would do the same in 2020. But Sanders’s strategy was to ignite a grassroots mass movement to overcome the Democratic Party from within.

After a poor showing in the South Carolina primary, Sanders dropped out. Shortly thereafter, the winds of pandemic and BLM protests shook the nation and might have buoyed the Sanders campaign, with its signature issues of healthcare and equality for all. Instead of making history, the Great Gray Hope’s grand plans have sadly been reduced by his fateful conviction to work within the confines of the Democratic Party to urging the wearing of face masks.

Short of a fascist coup by Trump, the liberal-left has legitimate concerns. A rightward specter is haunting the U.S. and beyond with serious consequences. White supremacy remains seminal in a nation founded on the expropriation of the Indigenous and the exploitation of African slaves. The decline of living standards and an ever more precarious workforce are reaching crisis proportions with the pandemic. The worst is yet to come, creating a political dynamic of discontent that can swing either left or right.

Rather than merely replacing the current White House occupant with one with better table manners, more radical measures are called for.

What remains is a political theatre of two neoliberal parties vehemently contesting matters of style and colluding on matters of substance. The two major parties concur: bail out Wall Street, renew the Patriot Act, increase the military budget, modernize the nuclear arsenal, prepare for war with China, pursue regime change in Venezuela, etc.

The trajectory of neoliberalism has entailed a concentration of economic and political power coupled with an increasingly authoritarian and imperialistically aggressive state. This trajectory converges with fascism. A pervasive security state and the coercive apparatus of fascism are in fact already in place. According to the DNC, “Democrats have made modernizing our military a top priority” along with supporting our “national security personnel.” Ditto for the Republicans.

Hitler physically liquidated the trade unions along with the left political parties. He censored the press and engaged in a massive military build-up. In the U.S. today, union density has declined to 10.3 percent of the workforce, no countervailing left political organizations of consequence exist, the mainstream media echo Washington and the military budget balloons. Neither the historical example nor the current one is free of the defects of racism and xenophobia. Perhaps the salient political question for the 2020 electoral season is not whether there will be a fascist coup, but how would we know?