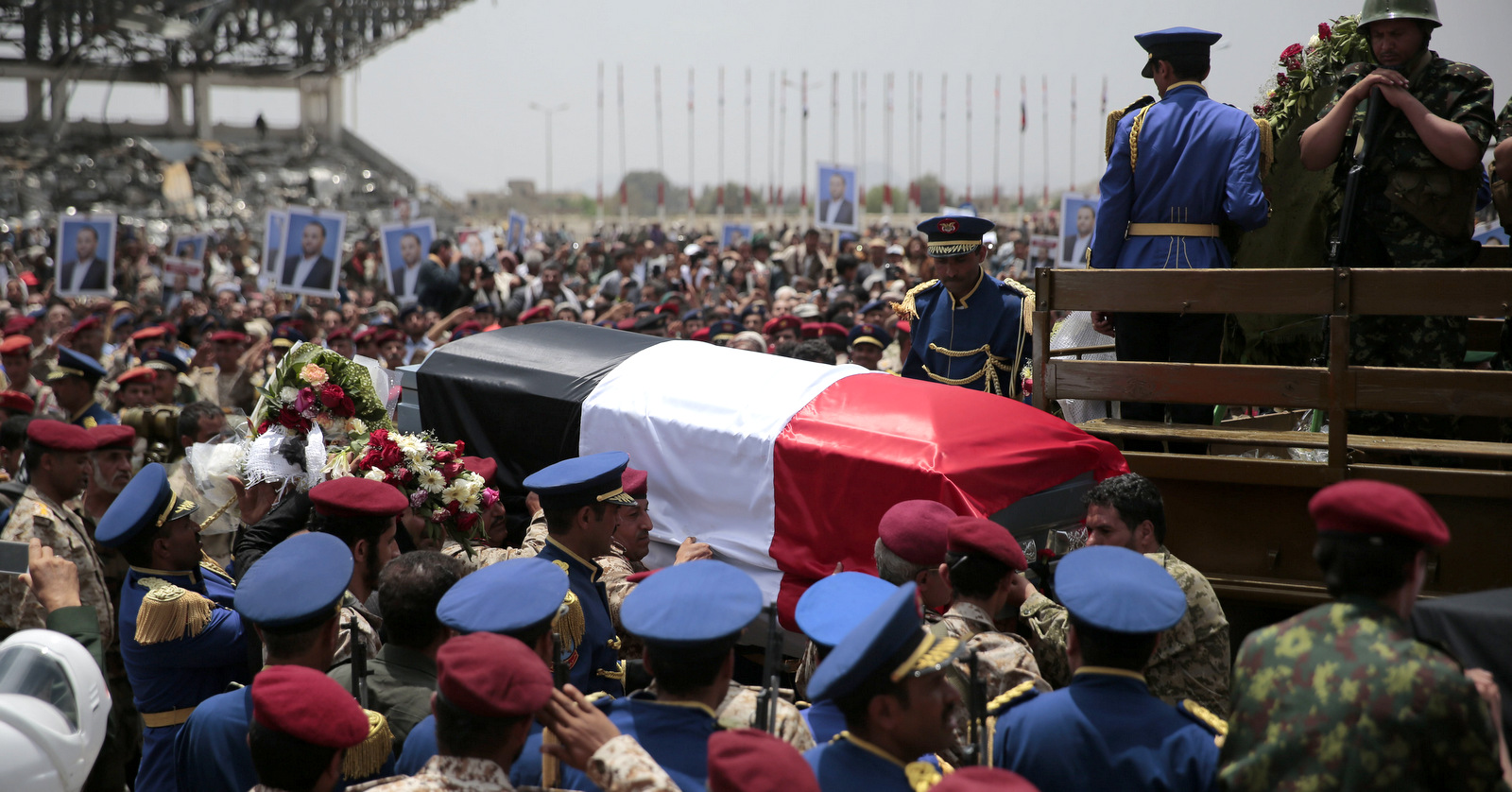 SANA’A, YEMEN (Report) — Tens of thousands of Yemenis took to the streets of Sana’a, Yemen’s capital, to hold a funeral procession for the president of Yemen’s Supreme Political Council, Saleh al-Samad, and his bodyguards who were killed on April 19 by airstrikes in Hodeida while preparing for a demonstration against attacks on the Red Sea port city. Yemeni officials now believe the United States was behind the airstrikes that assassinated the high-ranking Yemeni official.

The massive funeral ceremony was then targeted by Saudi-led coalition airstrikes, killing one civilian and injuring others.  al-Samad replacement, the new president of the Supreme Political Council: Mahdi Al-Mashat, the head of the House of Representatives, the president of the Supreme Judicial Council, and the prime minister, as well as other ministers, military leaders and social figures, were all present when the Saudi attack on the funeral procession took place.

In a historical scene never before witnessed in Sana’a, six pick-up trucks bearing the bodies of al-Samad and his bodyguards were escorted by soldiers dressed in uniform along with a crowd of thousands, holding pictures of al-Samad, in the al-Sabeen district (Zone 70) who arrived from Sana’a and from various other Yemeni governorates.

In a retaliation for the assassination and subsequent attack on al-Samad funeral, the Yemeni Air Force fired eight Bader-1 ballistic missiles at vital commercial targets in Jaizan, southern Saudi Arabia. The missiles hit their targets, but no further details are available as to the exact locations of the targets, possible casualties, and the extent of damage caused.

Meanwhile, the Ministry of Public Health and Population appealed to international organizations to support the National Center for Blood Transfusion and Research in order to permit it to resume its work. The center was targeted by U.S.-Saudi strikes and now suffers from depletion and a lack of blood stockpiles. The attack comes just days after the Ministry of Health called for civilians to donate blood for the victims of the recent wedding attack which left 88 dead or injured.

Destruction at the National Center for Blood in Sana’a from Saudi airstrikes on April 28, 2018. (Photo: MintPress News)

Officials in Sana’a held the United States responsible for the assassination of Saleh al-Samad, which came after al-Samad called for a demonstration against expected U.S. participation in an attack on Hodeida, stating that Saudi Arabia is not capable of carrying out such a complex operation on its own.

Abdul-Malik al-Houthi, leader of Ansarullah, in a televised speech on Saturday, held the United States chiefly responsible for the assassination, saying ” the Americans played the leading role in Sammad’s murder, and their fighter jets closely monitored the entire phase of the operation.”

The moment a Saudi airstrike targeted the funeral ceremony in Sana`a on April 28, 2018. ( Photo: MintPress News )

On Wednesday, April 25, the Yemeni people held a massive rally in the port city of Hodeida, located 150 kilometers southwest of the capital Sana’a, in order to thwart any possible attack on Hodeida, making it clear to the U.S. and Saudi-led coalition that the invaders “will be received with rifles and daggers,” according to their statement.

Samad, who was chosen by the only parliament in the country in June 2016, was an influential figure in the resistance against a more than three-year-old war imposed by Riyadh on the impoverished country. He was also Number Two on the Saudi-led coalition’s most-wanted list which includes about 30 key political figures in Yemen.

The U.S. government supports Saudi Arabia: the most dictatorial regime in the region and responsible for one of the greatest mass violations of international law and collective murder in modern history. The Saudi-led coalition has launched a military campaign against the poorest country in the Middle East — supported by U.S. military action — which has left 600,000 civilians dead and injured since March 2015, according to the Yemeni Ministry of Human Rights.