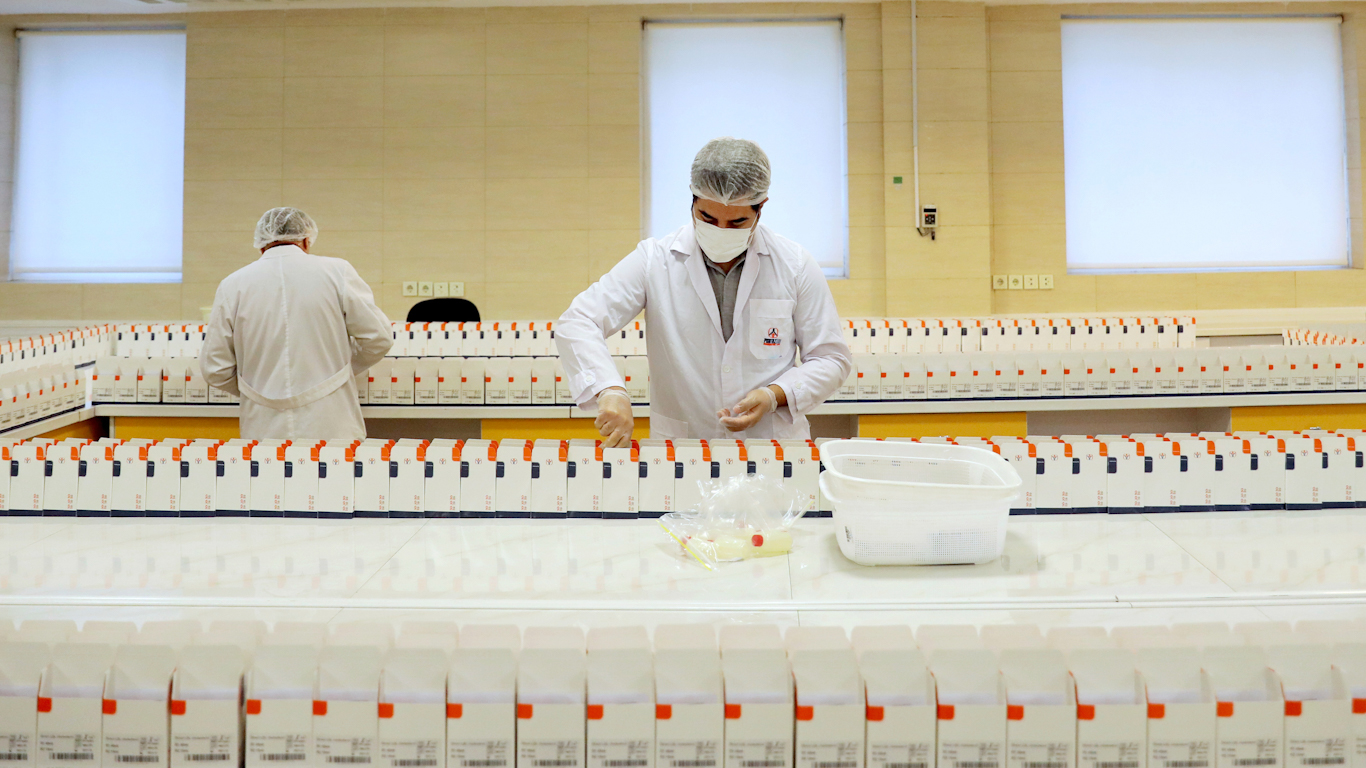 Countries currently facing US sanctions, around a quarter of the world’s population, are faring far better than the United States and leading the global fight against COVID-19.

After weeks of dismissing it as a liberal “hoax” designed to unseat the president, brushing the virus off as no big deal and under control, the Trump administration is clearly floundering in its response to the COVID-19 pandemic. Despite weeks of warning where it could have taken precautionary steps, the United States currently has four times the confirmed cases and twice the deaths of any other country. At the same time, the countries it is currently placing under economic siege, totaling around a quarter of the world’s population, are faring far better and leading the global fight against the coronavirus.

China, for instance, the first epicenter of the outbreak, has managed to slow its new COVID-19 cases to a trickle, reopening for business after losing 4,632 people – a number that, in the context of a stark April reality, appears impressively low. Although much of the discourse in the West condemns the Chinese government’s supposedly incompetent or slow response to COVID-19, the reality is that Beijing alerted the World Health Organization on December 31, when just 27 cases (and no deaths) had been identified, with authorities not yet even aware that the condition was a coronavirus.

The country is at the forefront of the production and distribution of protective and medical equipment throughout the world and, along with Russia (another sanctioned state) is one of the few nations to fly medical personnel around the world to help other countries. Russia even sent a planeload of cargo to the United States, despite the American sanctions hurting its economy. While their actions have been presented in corporate media as cynically trying to “curry favor” abroad, the aid has been much appreciated in countries suffering under the pandemic. In contrast, the U.S. has led the world in stealing or requisitioning supplies destined for other nations.

Another sanctioned state exporting doctors across the world during the pandemic is Cuba, the island nation is sending medical staff to neighbors like Haiti, Venezuela, Suriname and Jamaica and also further afield to Italy. “This is a global battle and we have to fight it together,” said nurse Carlos Armando Garcia Hernandez, capturing the medical internationalist spirit of Cuban medicine pioneered by Che Guevara, who quipped that, “The life of a single human being is worth a million times more than all the property of the richest man on earth.” A Cuban antiviral drug, Interferon Alpha 2b, has also proved successful in boosting patients’ immune systems, helping them fight off the coronavirus, and is now being used worldwide.

Venezuela, meanwhile, struggling under crippling U.S. sanctions that have claimed the lives of at least 100,000 people according to an American UN Special Rapporteur, has mobilized to fight the virus head on. The country has conducted twice as many tests as any other South American nation, but only 288 COVID-19 cases have been found, leading to only 10 deaths. Even before any cases were confirmed, President Maduro declared a health emergency, quickly closing public buildings like theaters and restaurants. His administration rapidly organized a huge online database where citizens could inform authorities of their symptoms. Medical professionals visited tens of thousands of people in their own homes, distributing test kits and advice. Maduro decreed the suspension of all rent and utility bills during the crisis, also banning the firing of workers.

A testament to the country’s efforts is that thousands of Venezuelan expats in the U.S., at least 92 percent of whom voted against Maduro in the 2013 elections, came back to the country during the pandemic, suggesting they are far more confident in Venezuela’s handling of the crisis.

Meanwhile, Vietnam, a country not currently sanctioned but having faced Washington’s wrath for decades, surely earns the top prize in handling the virus. Despite recording its first positive case just two days after the first American one, authorities have managed to limit the outbreak to just 268 cases and zero deaths. This is not because they are not testing, far from it. In fact, the country has designed, developed and mass produced multiple test kits all costing less than $20 each and giving dependable results in less than 90 minutes.

Those arriving from abroad are quarantined for two weeks while anyone coming to a major city or building has their temperature checked. Whole villages and towns have been fenced off due to one positive test. There is certainly an authoritarian element to their response; those lying about their past whereabouts or found to be spreading false information about the pandemic can face charges. However, the response has hinged upon the strong collective solidarity of the Vietnamese people, many of whom have likened the present events to the Tet Offensive, where millions united in secret to drive the American invaders back in a surprise attack.

In Iran, one of the first global hotspots and a country that planners in the U.S. were gleefully predicting would fall in on itself under the strain, has managed to get to grips with the pandemic. The number of new daily cases of COVID-19 has been falling day-on-day since March 30.

Ironically, Mohammad Morandi, a professor at the University of Tehran, claims the crippling sanctions that blocked Iranian oil exports have inadvertently better prepared them to deal with the total collapse in global oil prices than U.S. allies like Saudi Arabia, the UAE or Qatar.

Are others prepared? Will the Saudi regime survive? UAE? Kuwait? Qatar? US shale? What will happen to the US banking sector & oil industry?

The balance of power is shifting.

While the sanctioned countries vary greatly in their level of human development and the democratic credentials of their governments, they all share one thing in common: they have refused to buy into a U.S.-led neoliberal economic order that appears totally unprepared and unable to come to terms with a globalized pandemic. Countries that have been the most enthusiastic adopters of neoliberalism have, not coincidentally, found their individualistic ideology that promotes greed and discourages collective solutions sorely lacking in tackling a public health crisis that threatens the entire world.

Lab-Leak, Gain-Of-Function, and the Media Myths Swirling Around the Wuhan Institute