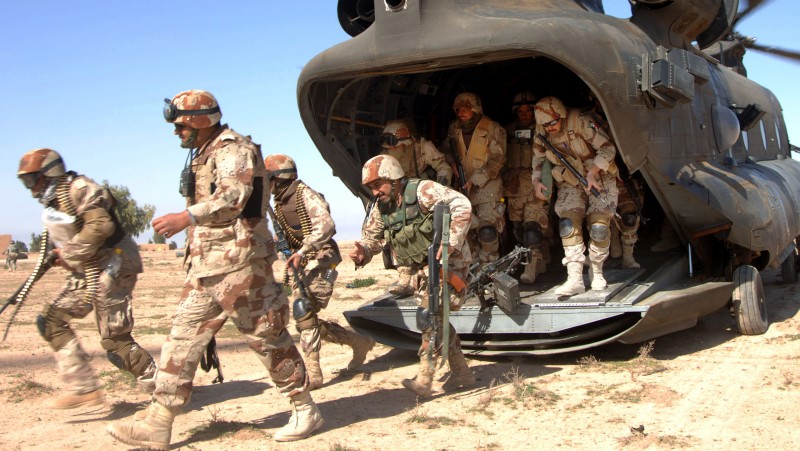 The U.S. military interventions in Iraq and Afghanistan have cost taxpayers nearly $5 trillion and counting, according to a new report released to coincide with the 15th anniversary of the attacks.

Dr. Neta Crawford, professor of political science at Brown University, released the figures in an independent analysis (pdf) of U.S. Departments of Defense, State, Homeland Security, and Veteran Affairs spending, as well as their base and projected future spending. Crawford is also a director at Brown’s Costs of War Project, which works to draw attention to the human, economic, and political toll of the military response to 9/11.

In total, the wars already boast a price tag of $4.79 trillion, she found. And the cost is still climbing.

Crawford’s estimate includes budget requests for the 2017 operations in Afghanistan—which are poised to continue despite President Barack Obama’s vow to withdraw troops from the country by then—as well as in Iraq and Syria. The Pentagon requested $66 billion for those fights just for that year.

However, even if the U.S. stopped spending on war at the end of this fiscal year, the interest costs, such as debt for borrowed funds, would continue to rise. Post-9/11 military spending was financed almost entirely by borrowing, which in turn has driven debt and interest rates, the project has previously noted.

Separate reporting late last month by the U.K.-based watchdog Action on Armed Violence (AOAV) found that the Pentagon could only account for 48 percent of small arms shipped to Iraq and Afghanistan since 9/11—meaning more than half of the approximately 700,000 guns it sent overseas in the past 15 years are missing.

What’s more, a recent Inspector General audit report found a “jaw-dropping” $6.5 trillion could not be accounted for in Defense spending.

Crawford’s report continues: “Interest costs for overseas contingency operations spending alone are projected to add more than $1 trillion dollars to the national debt by 2023. By 2053, interest costs will be at least $7.9 trillion unless the U.S. changes the way it pays for the war.”

“No set of numbers can convey the human toll of the wars in Iraq and Afghanistan, or how they have spilled into the neighboring states of Syria and Pakistan, and come home to the U.S. and its allies in the form of wounded veterans and contractors,” the report states. “Yet, the expenditures noted on government ledgers are necessary to apprehend, even as they are so large as to be almost incomprehensible.”