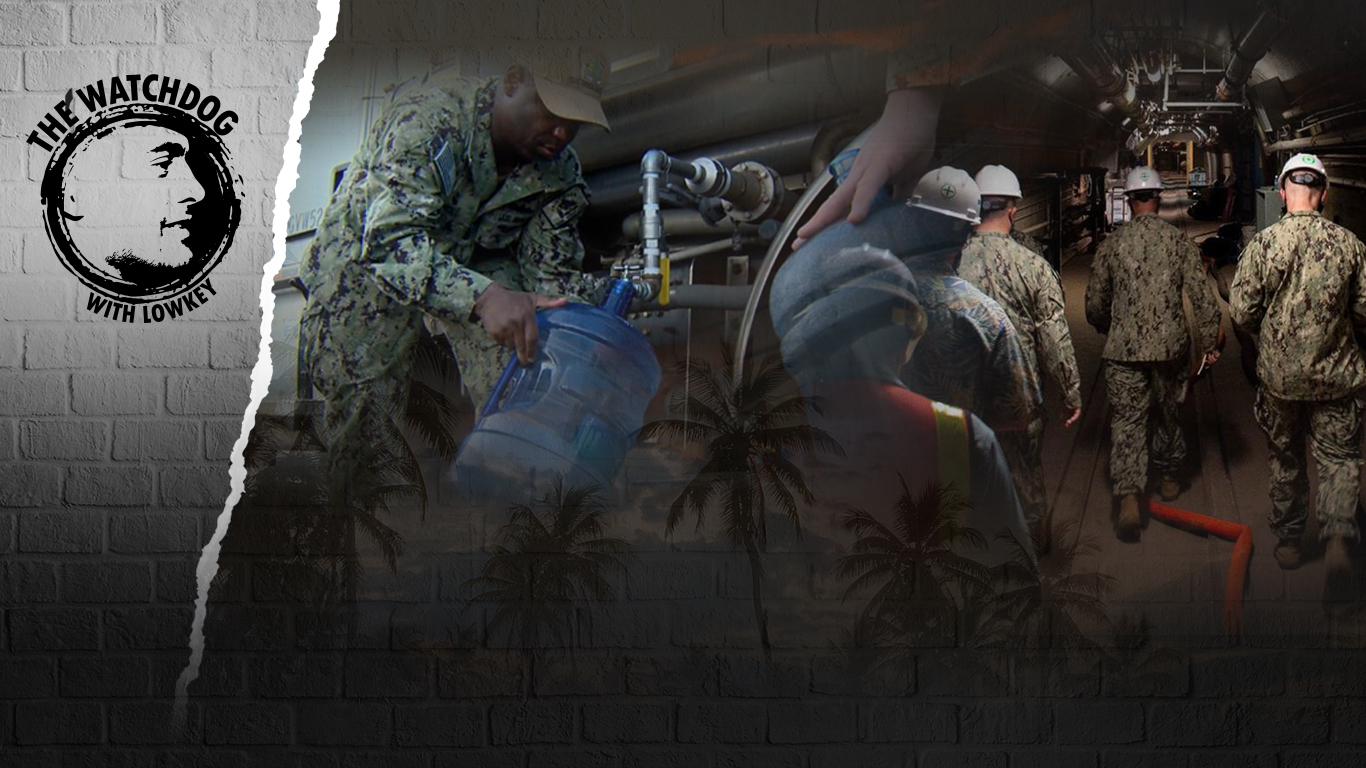 “It’s not a government; it’s not a democracy; it’s essentially a mafia state run by terrorists who don’t hurt just Hawaii but indigenous peoples across the world.” – Ihilani Lasconia

The state’s attorney general, David Day, has alleged that the military has essentially no control over the safety of the enormous depot, which holds 250 million gallons of fuel. Day remarked that the state had a “ticking time bomb” on its hands, and that further contamination of its precious water supply was all but inevitable. The tanks sit just feet above the island’s largest aquifer.

And this incident is merely the latest in a long list showing the American empire’s callous disregard for the civilian population of Hawaii, as it puts military needs before the people or the environment. Joining Lowkey today are two Hawaiian activists, Ihilani Lasconia and Daniel Kauwila Mahi. Ihilani is an artist, singer and organizer from Waimānalo; Daniel is a musician, rapper and student from Honolulu.

The two place the latest disaster in the context of centuries of American imperialism, which sees Hawaii as a strategic location for control over the Pacific. The United States overthrew the Hawaiian monarchy in 1893 and formally annexed the islands in 1898. From there, it became a linchpin in the U.S. expansion across the Pacific and the conquest of the Philippines, Guam and other territories, serving as an important military launchpad.

There are 11 military bases on Oahu alone, including the enormous Pearl Harbor, the headquarters of the U.S. Pacific Command. So militarized have the islands become that around one in ten of all Hawaii residents are servicemen and -women.

“It’s not just the guns and the bombs,” Lasconia told Lowkey, noting that the military has even tested depleted uranium shells at its bases, leading to locals developing cancer. “This is just the tip of the iceberg,” of being at ground zero for the American war machine, she added.

The deep-seated racism towards the indigenous population is something that native Hawaiians can feel every day. Lasconia noted that this latest contamination was far from an isolated incident. “Fuel tanks have been leaking for decades now,” she said; “But [it is] because [this time] it affected predominantly white people on the U.S. base that they are doing something about it.” Kauwila Mahi noted that the increased critical coverage of the incident is also prompted by the negative consequences it has for the state’s two other sectors of power: the tourism and real estate industries, which do not wish to see further environmental degradation. He sees this as an opportunity to use the Red Hill disaster as a wedge issue to strike back at the excessive militarism on display throughout the islands.

Ihilani and Daniel are among a new generation of leaders challenging the empire, although they see themselves as part of a long tradition. “Hawaiians have always opposed militarization throughout Hawaii,” Lasconia said. However, she expects no help from local elected officials, who do not have the power to speak out against the military for fear of reprisals. “It’s not a government; it’s not a democracy; it’s essentially a mafia state run by terrorists who don’t hurt just Hawaii but indigenous peoples across the world,” she told Lowkey.