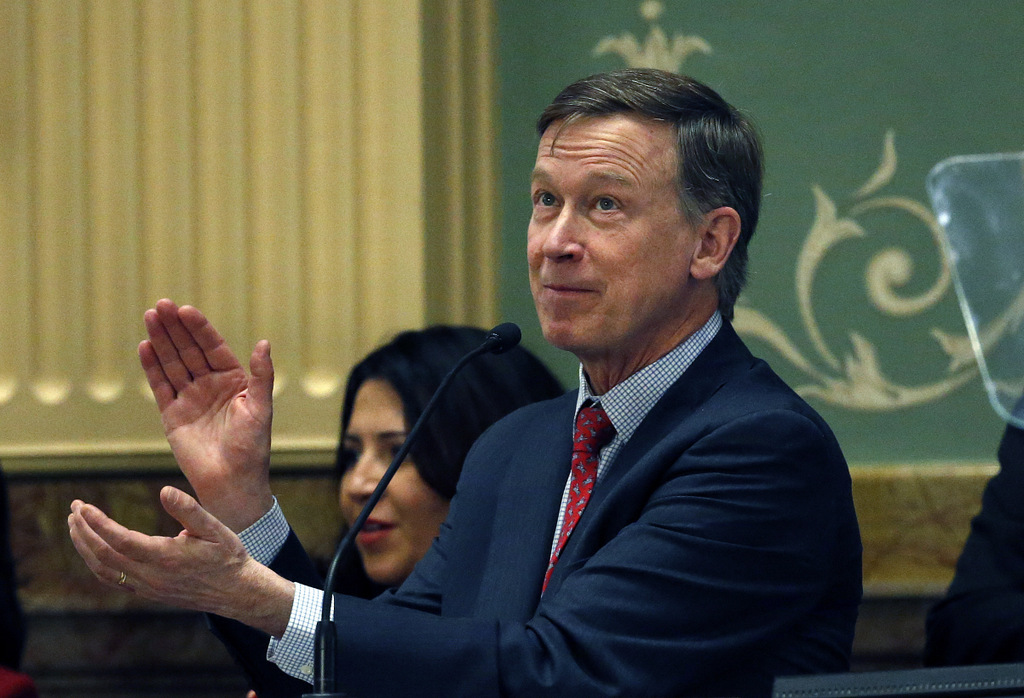 Pro-Business, ‘Pragmatic’ Democrats Launch Group In Bid To Save Party

Colorado Gov. John Hickenlooper applauds as he delivers his annual State of the State address in Denver. Dissatisfied with Democratic fortunes in the Trump era, a group of prominent Democrats is forming an organization outside the formal party structure with the goal of winning again in Republican-dominated middle America. Calling itself “New Democracy.” (AP/Brennan Linsley)

From the ideological middle, which lauds pragmatism and pro-business politics but is largely incapable of turning this into a winning formula during elections, comes a newly re-branded venture called New Democracy.

The organization, according to a press release, plans to broaden the appeal of the Democratic Party “geographically and demographically.”

“New Democracy is a ‘home base’ and support network for pragmatic Democrats determined to make our party competitive in every part of America,” director of New Democracy, Will Marshall, contended. “Democrats don’t need to choose between center and left. We need to expand in all directions.”

“Building a broad coalition is the Party’s best chance of rectifying today’s dangerous imbalance of political power and stopping the harmful” agenda advanced by President Donald Trump and the Republican Party.

Marshall’s organization is desperate to remain politically relevant in an era when the politics of a Democratic Socialist, Bernie Sanders, is the energy breathing new life and possibility into progressive politics. It is forcing Democrats, like the corporate Democrats aligned with this venture, to decide whether they are on the side of the people or industry when it comes to health care, wages, workers’ rights, the environment, education, and other issues of social justice.

According to New Democracy, the organization plans to be a “forum for new ideas” that can “extend the party’s electoral reach to moderates, independents, and disaffected Republicans.” But what new ideas?

For example, Marshall told the Associated Press the organization could highlight Trump’s isolationist trade policy and how it is steering foreign partners away from U.S. agribusiness.

“This is coming home to roost in rural America,” Marshall said. “So we need to talk about that the right way and in the right places.”

Will the right way involve exploiting the misery and pain of family farmers to argue Trump is not doing enough to encourage global agriculture investments in rural communities? What are the buzzwords Marshall’s merry band of consultants plan to use to woo those struggling in the heartland?

Who are “pragmatic candidates” that can “compete and win in suburban, small town, and rural places”?

The Democrats invested heavily in Jon Ossoff, who ran in a special election in a suburban district in Georgia. He opposed single-payer health care and campaigned as a smarter Republican in an effort to win so-called reluctant Trump voters. He made appeals to respect, civility, kindness, and decency that were directed at Trump. The strategy failed.

What constitutes a “radically pragmatic idea”? Have all 50 states host a special day for entrepreneurs, where government officials join forces with industry leaders to help Americans develop their small business? Or lock senators and representatives in a room until they come up with a balanced budget that cuts spending and entitlement programs while setting America on a path toward first-class modernization, innovation and a debt-free future that lasts until 2035?

Also, what kind of grassroots action does Marshall’s group plan? Will there be protests for more refundable tax credits for businesses? Does New Democracy plan to occupy Congress until the government sells off its underused assets and becomes more fiscally responsible?

Shadowproof contacted Cody Tucker, New Democracy’s press person, but Tucker declined to put this author in touch with someone at the organization who could answer these critical questions.

The press release sent out names of people that will form the New Democracy resistance army:

Vilsack, the former Secretary of Agriculture, has a record of shilling for Big Agriculture. He fear-mongered on the issue of GMO labeling.

The Organic Consumers Association challenged his nomination by President Barack Obama. “While Vilsack has worked to restrain livestock monopolies, his overall record is one of aiding and abetting Concentrated Animal Feeding Operations (CAFOs, also known as factory farms). Vilsack’s support for unsustainable industrial ethanol production has already caused global corn and grain prices to skyrocket, literally taking food off the table for a billion people in the developing world.”

Delaney, Himes, Rice, and Schrader supported fast track for the Trans-Pacific Partnership (TPP), which would have added to the economic destruction wrought by prior free trade deals like the North American Free Trade Agreement (NAFTA).

Former Secretary of the Interior Ken Salazar strongly supported the TPP. He pushed for TransCanada’s Keystone XL pipeline. He also once insisted, “There’s not a single case where hydraulic fracking has created an environmental problem for anyone.” He is a fervent energy lobbyist and a prime example of someone who has taken advantage of the revolving door between government and private industry. (Hillary Clinton planned to have Salazar head her presidential transition team, but she lost to Trump.)

Hickenlooper is another Democrat who supports fossil fuel energy interests. As Colorado governor, he actively opposed a ballot initiative that would have allowed Coloradans to vote against natural gas fracking. In 2013, during a Senate Energy and Natural Resources Committee Hearing, Hickenlooper boasted that he drank fracking fluid with Halliburton executives.

The Democratic governor also opposed a single-payer ballot initiative called ColoradoCare, when it was up for a vote in 2016. As a Clinton superdelegate, he argued health reforms were “just beginning to bear fruit, and it would be premature to dramatically remake our health care system at this time.”

If At First You Don’t Succeed, Try The Third Way Again

Remarkably, Marshall was involved in the effort in the 1980s to elect “moderate” Democrats like Bill Clinton.

Marshall was a major backer of President George W. Bush’s “freedom agenda.” He signed a letter from the Project for a New American Century that expressed support for the Iraq invasion. He urged Bush to maintain a U.S. military occupation for as long as necessary to “ensure a stable, representative regime” was in place. He also co-founded the Democratic Leadership Council known for promoting concessions to free market ideologues at the expense of working class Americans.

Clinton Democrats are largely responsible for the predicament in which the party currently finds itself. They aligned with business forces in the early 1990s. They were against labor, civil rights, and other liberal causes. They pushed for NAFTA. They proudly supported welfare repeal and bills to expand mass incarceration. They were supportive of a 1997 budget that slashed millions of dollars, which went toward social programs like Medicare and Medicaid. They were for the deregulation of industry, which boosted Wall Street. They enabled the right-wing forces that have wreaked so much havoc on voters alienated by the corporate politics of the Democratic Party.

Related | Neoliberalism: ‘Profit Goes To Apple And Microsoft, Not To The Taxpayer’

The announcement of this organization comes a couple months after Mark Pincus, the co-founder of the online gaming company Zynga, and LinkedIn co-founder Reid Hoffman launched Win the Future to “crowdsource” ideas to stop the Democratic Party from moving too far to the left and make it more “pro-business.” The laughable dead-on-arrival venture was sweetened by the fact that Pincus would like to recruit Stephan Jenkins, the frontman for the 1990s rock band Third Eye Blind, to run as a “political outsider.”

The Democratic Party establishment seems to have taken its cues from such planned operations as New Democracy and Win The Future. It’s “A Better Deal” initiative platform was a veritable salad of buzzwords for centrists alienated by the rise of Sanders Democrats, who celebrate democratic socialism and demand Democrats stand strongly in support of social and economic justice.

What New Democracy makes clear is neoliberal politics still holds great influence over the Democratic Party establishment. Its moderate centrists will push pragmatism as “radical” like the snake oil salesman they are. Or the establishment will find a way to conceal neoliberal politics behind identity, by pushing women or candidates of color, who are willing to front for industry.

This will keep resulting in lost elections, either against primary challengers from the Sanders wing or far-right Republicans, because Americans across geography and demographics, particularly young Americans, no longer subscribe to the “Third Way” ideology revered by the business class in power.