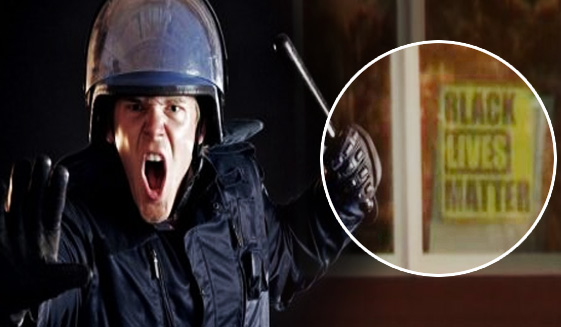 Published in partnership with CounterCurrent News.

Virginia police couldn’t believe a local family farm would have the audacity to post a “black lives matter” sign on their window. Far from just a statement, the phrase has come to indicate support not just for the idea that black lives matter just like all other lives, but also for the wave of police accountability protests by the activist group by the same name.

But the call against Cox Farms backfired dramatically.

First of all, the sign was posted in the window of one of the family farm’s private homes. But even this personal expression of support for police accountability activism was too much for the local cops.

“This is a time in which law enforcement is the target for criticism for almost everything they do and officers are constantly questioned by the public and the media without the benefit of all the facts,” the FOP post read. “The presence of this sign at Cox’s Farms helps perpetuate this kind of behavior and judgment. I know you have heard it about a million times but the truth is that ‘All Lives Matter.’”

The community rallied behind Cox Farms which is known and loved by the community as a place to pick pumpkins and take autumn taking tractor rides.

But the police said that the business should be boycotted because of their “baseless criticism” of the police.

Gina Cox, the owner of Cox Farms, said they have the right to post whatever signs they want on their home or place of business.

“It’s her private property and she can put up any political sign she wants to in her yard,” she explained to local WUSA. “We treasure our relationship with our local police force, it’s not anything against them at all.”

Now, residents are accusing the police department of bullying and intimidation.

“The Facebook post they made, which was removed because of the unprecedented public outrage towards their attempt to bully a local landmark and beloved destination, further reinforces the lack of trust in the Fairfax County Police Department,” a local Cop Block community activist Mike Curtis, told the station.

The FOP president, Brad Carruthers, said said that they backed off of the family because it was the “wiser course of action.”

“The phrase ‘black lives matter,’ which was initially associated with the positive intentions of creating better connections within communities and encouraging education and dialogue on issues of race, has unfortunately also been used more recently to incite violence against law enforcement officers, which is why it has negative connotations for us,” Caruthers stated. “My hope is that the situation will improve and we will forge better bonds and a better partnership within our communities.”

But Black Lives Matter activist Erika Totten said to WUSA. “It’s not an attack on individual officers; it’s a movement to highlight the structural oppression Black people face in this country. When Black men, women and children are dying in the street at the hands of a law enforcement officer every 28 hours, when most of the people incarcerated are there for non violent crimes, when a Black boy can be assaulted for using the ATM and for making gentrifies uncomfortable, how can we not begin the conversation on how to eradicate racial bias in our criminal justice system.”