With last Friday’s departure of his chief strategist Steve Bannon – one of the few members of President Donald Trump’s inner circle opposed to American “empire building” — many speculated it was only a matter of time before the Trump administration took an even more hawkish turn.

Less than two days later, Secretary of Defense James Mattis announced that Trump had made a decision on the United States’ strategy for Afghanistan after a “sufficiently rigorous” review process. The writing seemed to be on the wall regarding what was to come for the U.S.’ longest war in its history, as the U.S. occupation of Afghanistan approaches its 17th year. And indeed it was.

Monday night, in a televised address to the nation, Trump officially took ownership of a war he once called a “complete waste.” In his speech, Trump nebulously promised “victory” against terrorism and spoke against the same “rapid withdrawal” of U.S. troops he once supported. Though no specific troop levels were announced, Reuters cited an anonymous senior U.S. official who stated that Trump had approved the sending of 4,000 troops to Afghanistan.

Why are we continuing to train these Afghanis who then shoot our soldiers in the back? Afghanistan is a complete waste. Time to come home!

Previous reports had placed the figure anywhere from 3,000 to 50,000, meaning more could potentially be on the way. Recent reports have also suggested that Trump had been pushed towards greater involvement in Afghanistan by a billionaire financier and a chemical executive bent on extracting Afghanistan’s significant mineral reserves.

However, the irony here is not just limited to Trump’s dramatic U-turn regarding U.S. military involvement in Afghanistan nor his possible interest in greedily exploiting another nation’s mineral wealth. Perhaps more troubling is the fact that Trump has now announced that more U.S. troops will be sent to effectively guard the world’s largest opium crop, less than a month after Trump declared the domestic opioid crisis a “national emergency.”

The opioid crisis is certainly no trivial killer, as drug overdoses now claim more American lives than gun homicides and car crashes combined. In 2015, 142 U.S. citizens died every day from drug overdoses, and that number has only climbed in the years since. The problem can be seen as a complex one, but it is no secret that the illicit use of opioids in the U.S. began its steep upward spiral when the U.S. first invaded and occupied Afghanistan in 2001.

A few months before the U.S. invaded, the Taliban of Afghanistan had made headlines for having “dramatically ended the country’s massive opium trade,” after its leader outlawed opium poppy cultivation in the country. Prior to the outright ban on poppy production, Afghanistan had produced an estimated 75 percent of the world’s heroin.

Following the U.S. invasion, opium production surged dramatically, rising from 185 tons in 2000 to 3,400 tons in 2002. Nearly 17 years later, the country’s annual opium production has continued to rise, now accounting for more than 90 percent of the world’s heroin. While the U.S. government claims to have devoted over $8.4 billion to counter-narcotic programs in Afghanistan, the increase has been overseen directly by U.S. forces, who openly guard poppy fields in the Afghan countryside.

The U.S. military leadership overseeing the occupation of Afghanistan have long maintained that they must “tolerate” the poppy fields to prevent the local population from turning against them. In a 2010 interview, Lt. Col. Brian Christmas, then overseeing a group of Marines in the Helmand Province, told Fox News that opium-growing is “part of the culture” and that it just had to be accepted. He went on to say that Marines in Afghanistan provide “security” and “resources” to Afghan opium growers. 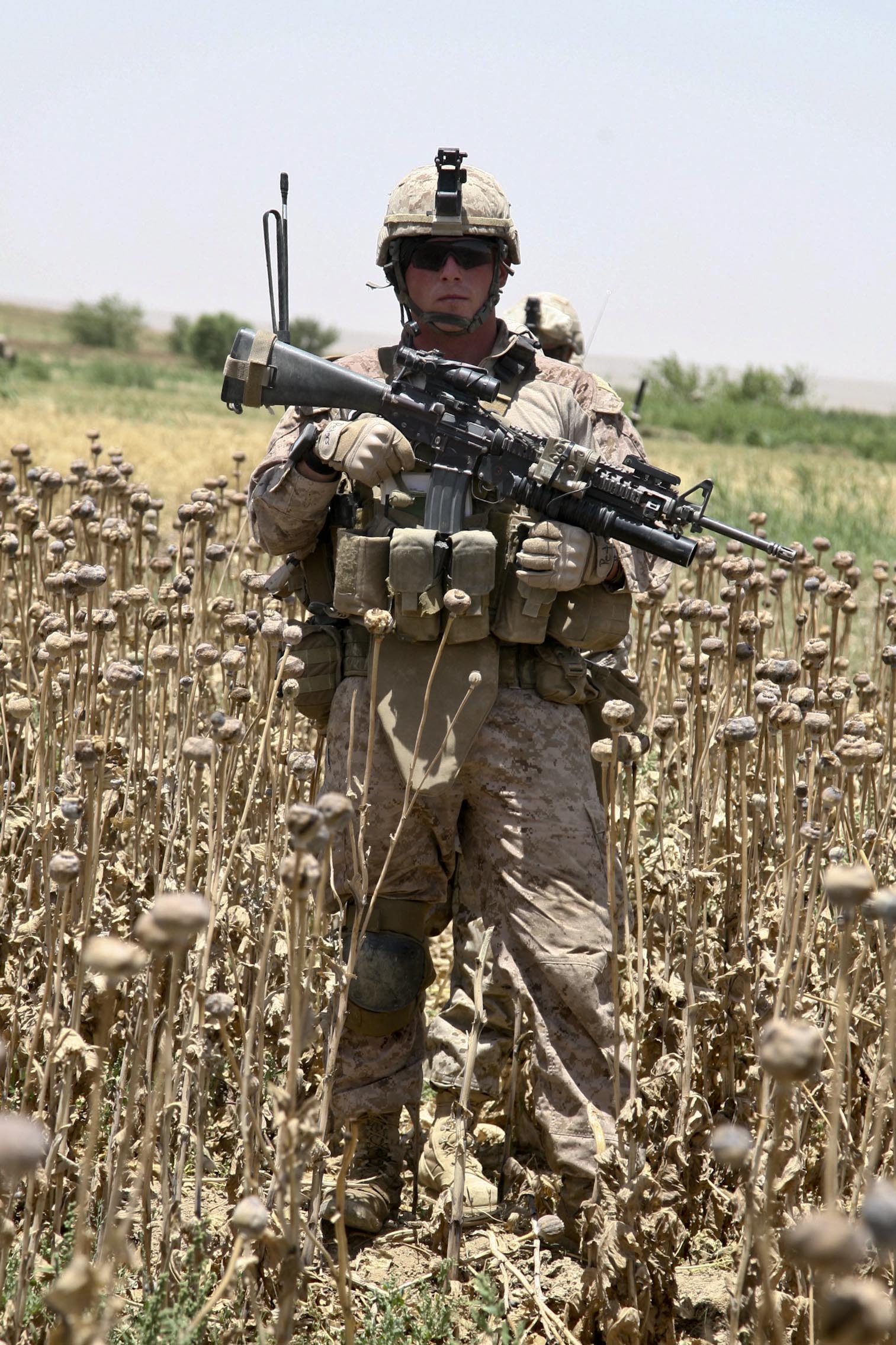 This “cultural” excuse is clearly hiding something else. It would be hard to explain, if it were all about “culture,” why the U.S. government had no problem indiscriminately spraying Colombian farmland with the cancer-causing herbicide glyphosate in an effort to end coca plant cultivation, despite the fact that the coca plant is also culturally significant to Andean cultures.

In addition to U.S. troops guarding Afghan poppy fields under the pretext of being culturally sensitive, the U.S. government has put notable Afghan opium kingpins, such as the brother of Afghan President Hamid Karzai, on its payroll. Ahmed Wali Karzai was on the CIA’s payroll for over eight years, even after he was exposed by The New York Times for having personally authorized the release of tons of heroin that had been seized by Afghan security forces.

The CIA has long been complicit in the global drug trade. During the 1960s and 1970s, the CIA collaborated with opium dealers in Laos and Southeast Asia in exchange for their political support against “communism.”

Even more infamous was the CIA’s role in importing cocaine from the Nicaraguan Contras into Los Angeles to help fund a civil war in the Central American country — and provide a kick-start for the cynical and ruinous “War on Drugs” at home. The occupation of Afghanistan is no different, as long-standing rumors purport that the CIA actively helps export Afghan opium.

The U.S.’ “tolerance” of the opium trade in Afghanistan has not been without its profound and devastating domestic consequences. Between 2005 and 2015, heroin use doubled among young adults in the U.S., coinciding with Afghanistan’s surge in opium production.

With the U.S. military actively occupying Afghanistan and “turning a blind eye” towards the cultivation and export of the crop, and with a near-monopoly of world supply, the nexus between the U.S. role “over there” and its impact “back home” is hard to overlook. There is simply no way to uncouple the massive surge in Afghan’s opium production from the burgeoning crisis of opioid use in the United States.

Trump’s decision to send more troops to Afghanistan and to eliminate the possibility of a “rapid withdrawal,” means not only he is continuing America’s longest and most wasteful war – he is also committing taxpayer money and American lives to guarding the very substance responsible for the worst drug-use epidemic in U.S. history.