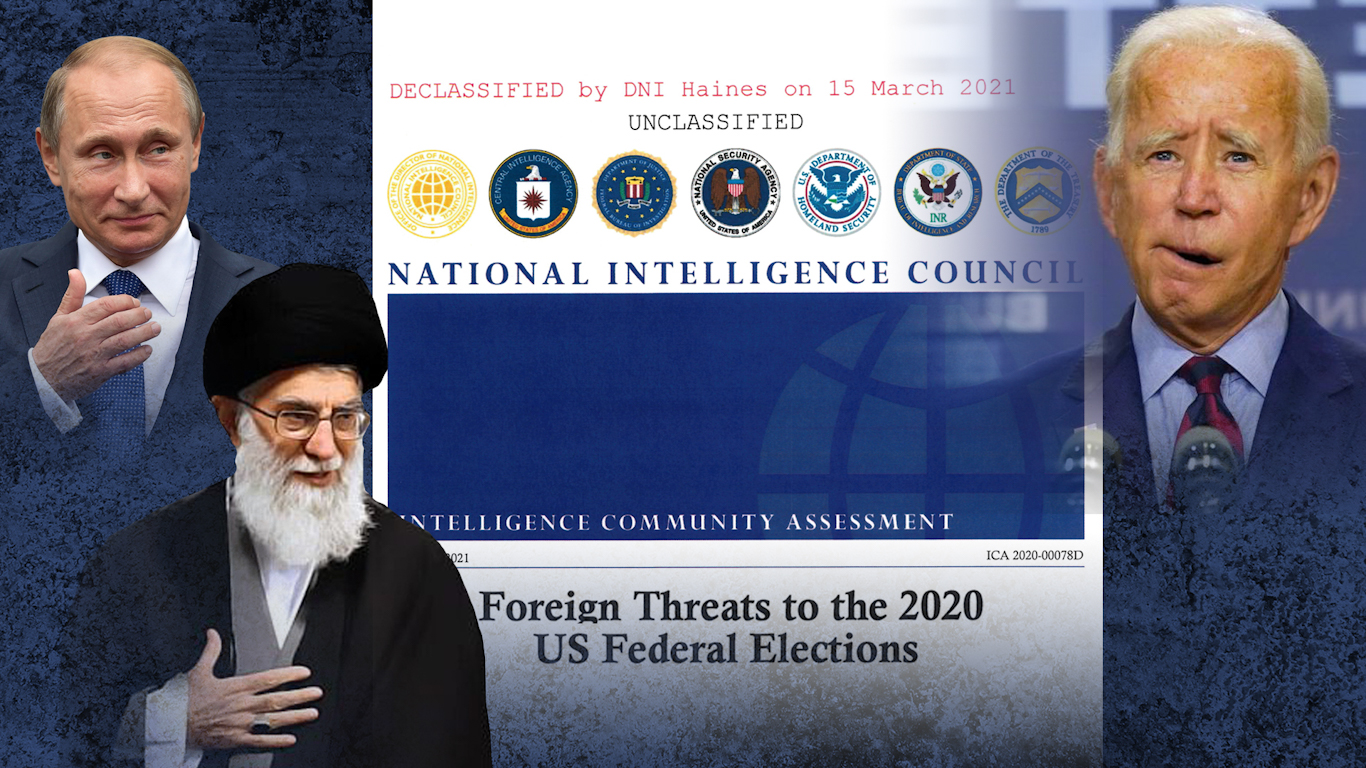 The Office of the Director of National Intelligence has issued a new report alleging wide-ranging Russian interference in the 2020 election, contradicting November statements that there was no election interference while outright ignoring documented interference from top US ally Colombia.

WASHINGTON — Russiagate is back! That’s right. The Office of the Director of National Intelligence (ODNI) says Russian President Vladimir Putin and Iran’s Ayatollah Khamenei meddled in the 2020 U.S. election. But not only they: Lebanese Hezbollah, Cuba and Venezuela did it too.

I know what you’re thinking: Where is the evidence? Well, the ODNI report doesn’t show any. But phrases like “we judge,”“we assess,” “probably,” and “likely” are used dozens of times. Apparently for corporate media, that’s good enough.

Never mind that, way down on the last page, the report says “Judgments are not intended to imply that we have proof that shows something to be a fact.”

So it’s the opinion, the estimation of the intelligence agencies.

The very same intelligence agencies that somehow missed that a giant mob of Trump supporters were openly planning to storm the Capitol building on January 6th. Or that said there was going to be a QAnon attack on the Capitol on March 4th that never happened. Or that told us back in November that Russia didn’t influence the election – the polar opposite of what they’re telling us now.

“There was no fraud, there were no irregularities,” commented former CIA chief of staff and CNN analyst Jeremy Bash.

“Various agencies have come out to say there was no widespread fraud in this election,” remarked CNN White House correspondent Pamela Brown.

“This has been the safest, most secure election we have ever had. We also know that Russia largely did not play in this election,” declared former Obama aide Chris Lu.

“It was remarkable. We didn’t see the kind of disinformation or disruption that we were worried about from Russia, if not China,” assured former Department of Homeland Security official Juliette Kayyem.

But that’s all been memory-holed because the intelligence community and news media think the public has the memory of a goldfish.

When Russian “propaganda” happens to be the plain truth

The report says that Russia’s primary effort was “alleging corrupt ties between President Joe Biden, his family and other U.S. officials in Ukraine.” Clearly, that’s a reference to Biden overseeing the 2014 coup d’etat in Ukraine and then putting his son Hunter on the board of the Ukrainian energy company Burisma, where he collected an $80,000 paycheck every month despite having no background in energy.

That’s right, if you think that’s corruption, you’re getting played by Putin.

The report also claims that Russian online influence actors played a tricky double game. Not only did they “promote former President [Donald] Trump and his commentary… At the same time, Russian actors criticized former President Trump or his administration when they pursued foreign policies – such as the targeted killing of Iranian General Qassem Soleimani.”

So if you thought that it was maybe a bad idea to start a war with Iran, you’re under the influence of Russian propaganda.

And when Joe Biden said about the killing of Solemani, “The haphazard decision making process that led up it, the failure to consult with our allies or Congress, and the reckless disregard for the consequences that would surely follow was in my view dangerously incompetent,” he was actually promoting Russian propaganda.

US ally gets a pass

But maybe what’s most remarkable is not what’s in the ODNI report, but what isn’t.

By the standards of the U.S. government, multiple elected officials in the party of Colombian President Ivan Duque brazenly interfered in the election against Biden.

Or Senator Maria Fernanda Cabal, who in one blog post heralded Trump as leader of the never-ending struggle against socialism and wrote that Biden is leading the way towards the radical wing of the Democratic Party’s socialist vision. On her Instagram, she posted a cartoon portraying Biden as a trojan horse for Bernie Sanders, Ilhan Omar and Alexandria Ocasio-Cortez  – whom she considers socialists. Here she portrayed Trump as an anti-communist warrior against Hugo Chavez, Fidel Castro and Nicolas Maduro.

The interference from Colombia’s far-right was happening so frequently that the U.S. Embassy in Colombia felt it necessary to warn them to not interfere in the election. And two Democratic members of Congress wrote an op-ed asking the Colombians to stop interfering.

On her blog, Maria Fernanda Cabal pointed out that the U.S. government didn’t take issue with former President Juan Manuel Santos saying he preferred Hillary Clinton during the 2016 campaign. Granted, that was a much more diplomatic approach than the rabid anti-communism of Maria Fernanda Cabal and was ostensibly based on Santos’s desire for the Colombian peace accord to succeed. But nonetheless, by the standards of the intelligence report, Santos’s endorsement of Clinton should be construed as interference.

“Election integrity” as a foil for geopolitical agenda

So why does the so-called intelligence community tell us that State Department-designated Official Enemy countries tried to interfere in the elections without providing a shred of evidence while ignoring the mounds of evidence that the U.S.’s closest ally in Latin America repeatedly interfered?

It’s because accusations of interference have nothing to do with protecting election integrity and everything to do with advancing a narrow, imperialist political agenda.

See, back in late January, Biden had signed an arms treaty with Russia – a necessary step to prevent a hot war, but bad for the image the spy agencies and Western media present of Russia as an evil empire. And the evidence-free media frenzies about Russia poisoning Alexei Navalny, hacking U.S. government agencies, and paying the Taliban to kill American soldiers in Afghanistan, which had been dominating the 24 hours news cycle, were getting stale.

So the ODNI report is a fresh injection of Russiagate bullshit into the bloodstream of American politics, one that prompted Biden to talk tough against Putin, even if George Stephanopolous has to demand it.

This is the clip of Biden's recent comments on Putin. Notice that @GStephanopoulos pressures a semi-conscious Biden to denounce Putin as a "killer" and demands he pay a price. This isn't journalism. It's straight up war propaganda. pic.twitter.com/sGRR4Htfxd

If it wasn’t clear before, Russiagate is a permanent feature of American politics. It’s too useful to the intelligence agencies and war industry, no matter how transparent the lies are.