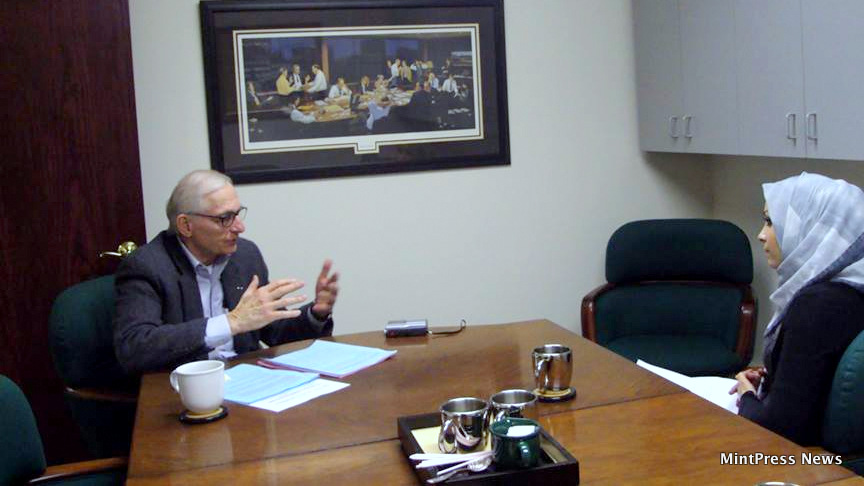 MintPress #TBT: A Ret. Pentagon Official Predicted Saudi Ambitions For ME Through Use Of Terror In 2011

In 2011, Mnar Muhawesh, founder and editor-in-chief of MintPress News, interviewed Air Force Col. B. Wayne Quist (Ret.) about goings on in the Middle East. Quist detailed Saudi plans for the region — plans that are important to reflect upon today.

Editor’s Note: Originally published in May 2011 on MintPress.net, the precursor to MintPress News, the following interview by Mnar Muhawesh, founder and editor-in-chief of MintPress, provides an in-depth look at Saudi Arabia’s plans for the region.  Four years have passed and much has come to fruition, as the rebels armed and supplied by the House of Saud are what we know today as the Islamic State of Iraq and Syria (ISIS) and Jabhat al-Nusra, the al-Qaida affiliate in Syria also known as the Nusra Front.

“The U.S. has had an agreement with the Saudis going back to 1945, when President Roosevelt met with the old king and basically had a handshake with him that we would protect the oil fields and the royal family, providing that they would provide the world with a free flow of oil. So that has been the agreement between successive U.S. presidents right up to President Obama.” – Col. B. Wayne Quist (Ret.)

Since 1979, the Saudis have replaced the Shah as the biggest consumer of U.S. arm sales. We haven’t gone back on that handshake since.

Wayne Quist is a retired Air Force colonel and was the director of the Airborne Warning and Control System (AWACS) — an airborne radar system that detects aircraft from over 250 miles away. He led the first AWACS into Saudi Arabia in 1980 after the fall of the Shah of Iran. Since the late 1960s, Quist has met with influential leaders and heads of state in the Middle East before and after they held their positions of power, including Moammar Gadhafi, the Shah of Iran, kings and princes of Saudi Arabia, Ali Saleh of Yemen, Anwar Sadat and Hosni Mubarak of Egypt.

Since retiring from the Air Force, Quist has recently coauthored two books on radical, militant Islamism and the ideology of al-Qaida — “Winning the War on Terror” and “The Triumph of Democracy Over Militant Islamism.” He is working on a third book in the series, “A New Approach to the Greater Middle East.” He is a popular speaker on the subject of militant Islamism and lectured at the 2004 Nobel Peace Prize Forum. He retired from the Air Force at the rank of full colonel and has written many publications in the fields of national security, political science and American history. Wayne graduated from St. Olaf College in Northfield, Minnesota, and holds advanced degrees from the University of Southern California and National War College, specializing in the Middle East.

Mnar Muhawesh (MM): Could you talk a little about your history in the Middle East and what led up to the decision to provide Saudi Arabia with AWACS?

Wayne Quist (BWQ): I first went into the Middle East in the late 1960s. I had the chance to meet with King Hussein of Jordan. And I even met with Gadhafi when he was a major in the Libyan Air force in 1969, before he was in power, and we had a lengthy discussion with him. He was young and vibrant, and was a very fascinating individual. It was rumored at that time, though, that something was happening with him and that he was in a key leadership position with some other officers in the Air Force. We had a big facility in Libya at the Wheelus air force base. We went down to Libya to meet with him there and he flew back to our headquarters in Germany. We met with him and his colleagues who he was working with, and I was very impressed with some of his ideas. He had what we thought were liberal ideas in terms of democracy and providing for the people. King Idris was the king, and at that time there was concern that he was from an older generation that didn’t understand the current generation. So Gadhafi was an important figure during this period in re-inventing Libya’s leadership. But looking at what’s going on in Libya now, he has obviously changed.

I subsequently had the opportunity to meet with the Shah of Iran on several occasions, both in Tehran and in Washington, before and after he was the leader there. When I met with the Shah, the three kings of Saudi Arabia — including the current king [the late King Abdullah], when he was crown prince — were present. I met with the current president of Yemen, Ali Saleh, in 1977, before he became president. We met with him in Sanaa and on that same trip we met with Anwar Sadat in Alexandria [Egypt] shortly before his assassination.

There had been a whole series of things that sort of led up to that deployment of AWACS into Saudi Arabia in 1980, which is really just a footnote in history because I wound up going into the Pentagon after having these experiences in the Middle East. I even wound up working in Middle East activities in the Pentagon during the 1970s during the Nixon, Ford and Carter administrations until about 1977, when I went into the AWACS program and we received our first two airplanes.

There was a flurry of activity in the world: the Shah of Iran was overthrown and the Soviet Union had just gone into Afghanistan, and that same month fanatical Wahhabis had taken over the holy mosque in Mecca. So three major events were taking place at exactly the same time. Plus, there was an incursion from Yemen into southern Saudi Arabia, and the Saudis panicked.

The U.S. has had an agreement with the Saudis going back to 1945, when President Roosevelt met with the old king and basically had a handshake with him that we would protect the oil fields and the royal family, providing that they would provide the world with a free flow of oil. So that has been the agreement between successive U.S. presidents right up to President Obama.

When all of these events were happening in 1979, this was a prelude to AWACS going into Saudi Arabia, but when that incursion came from Yemen into Saudi Arabia, it was very destabilizing to the region and the Saudis felt very threatened.

MM: After having met most of the current and previous leaders in the Middle East, what does the future of the Middle East look like? What do you think will happen to these leaders?

BWQ: It is inevitable that the leaders of the “fake” Arab republics will be toppled. … History tells us this. I believe that without paying attention to history, each successive world leader is condemned to repeat mistakes from the past. Going back to the American Revolution in 1776 that spawned the French Revolution in 1789, which then spawned the European revolutions in 1848 — they were fueled by the technology of 1848 and that was the telegraph, which was invented in 1844. By 1848, the revolutions spread to all of the major capitals of Europe. When the streets of Paris were barricaded, it spread the same message just like Facebook and Twitter are doing today — spreading the message of freedom. The conservative monarchies began to collapse, Dickens writes that it was the “best of times and the worst of times.” Out of it came the uniting of Germany, but also a fight between totalitarianism and democracy throughout most of the 20th century.

In 1989 the Berlin Wall crumbled; in 1991 the Soviet Union collapsed and communism existed no more in that region. A decade before that, a Middle East tyrant [the Shah of Iran] was overthrown in 1979 in Iran. In 2003, another tyrant [Saddam Hussein] was overthrown in Iraq.

Now, all of the fake republics in the Arab world are tottering today primarily because people have the means to communicate and they realize that when they do communicate and go down to the square and can be lead there through Twitter and Facebook messages. It is impossible to keep the genie of freedom inside the bottle. Once it comes out, they demand the same thing that all people all over the world from the beginning of the world have demanded: to be free; to be treated fairly; to be allowed to live with their families; to work productively; to worship in their way; and to live in tolerance.

That’s what’s happening in 2011. When we look at Tunisia, where did Ben Ali go? He escaped to Saudi Arabia — to the most oppressive country in the Arab world. Then we saw Mubarak go and it’s rumored he’s been in Tabuk, Saudi Arabia. And now Gadhafi’s reign is about to end. His days are numbered, without question. I would put him in the category of “fake” Arab republics along with the monarchies in the Middle East. I have witnessed what he has done, and he became extremely narrow. … Power and wealth corrupted, as we have seen time and time again.

MM: Why are the Arab uprisings so significant in comparison to other revolutions throughout history?

BWQ: We have two-thirds of the world’s Shias clamoring for freedom and over 350 million Arabs clamoring for freedom in one region and you cannot stop it. I like to go back to history and look at the aftermath of the 1848 revolutions. I am generally an optimist, but I see some trouble ahead. That’s why these are the “best of times and the worst of times.” We just don’t know what will happen. But it’s probably the most important time that we have ever witnessed in our lives. If we read our history books, very few generations are given the opportunity to live through a revolution. Look at the revolutions we’ve lived through since 1979: We’ve seen what happened in Iran. In 1989, we’ve seen what happened after the fall of the Berlin Wall and the end of the Soviet Union. We’ve seen what happens when autocracy was overturned in Iraq in 2003, but we still don’t know how Iraq will turn out.

Revolutions always cause uncertainty. What happens in a revolution is always euphoria in the beginning. For the people living in the revolution, as the revolution plays out, the young people are idealistic, but what comes after the euphoria is the counterrevolutionary force. The people, because they are so worn out from war and instability, often go along with the forces of stability, which sometimes bring autocracy even worse than what was toppled. That is what I fear most for the Arab world.

If the Arab oil autocrats could do anything, what they should do is use their trillions in oil money to promote a just government in Egypt, Libya and Tunisia. Imagine if Saudi Arabia and Iran united. Imagine the good that they could do for the Middle East for themselves and the entire world.