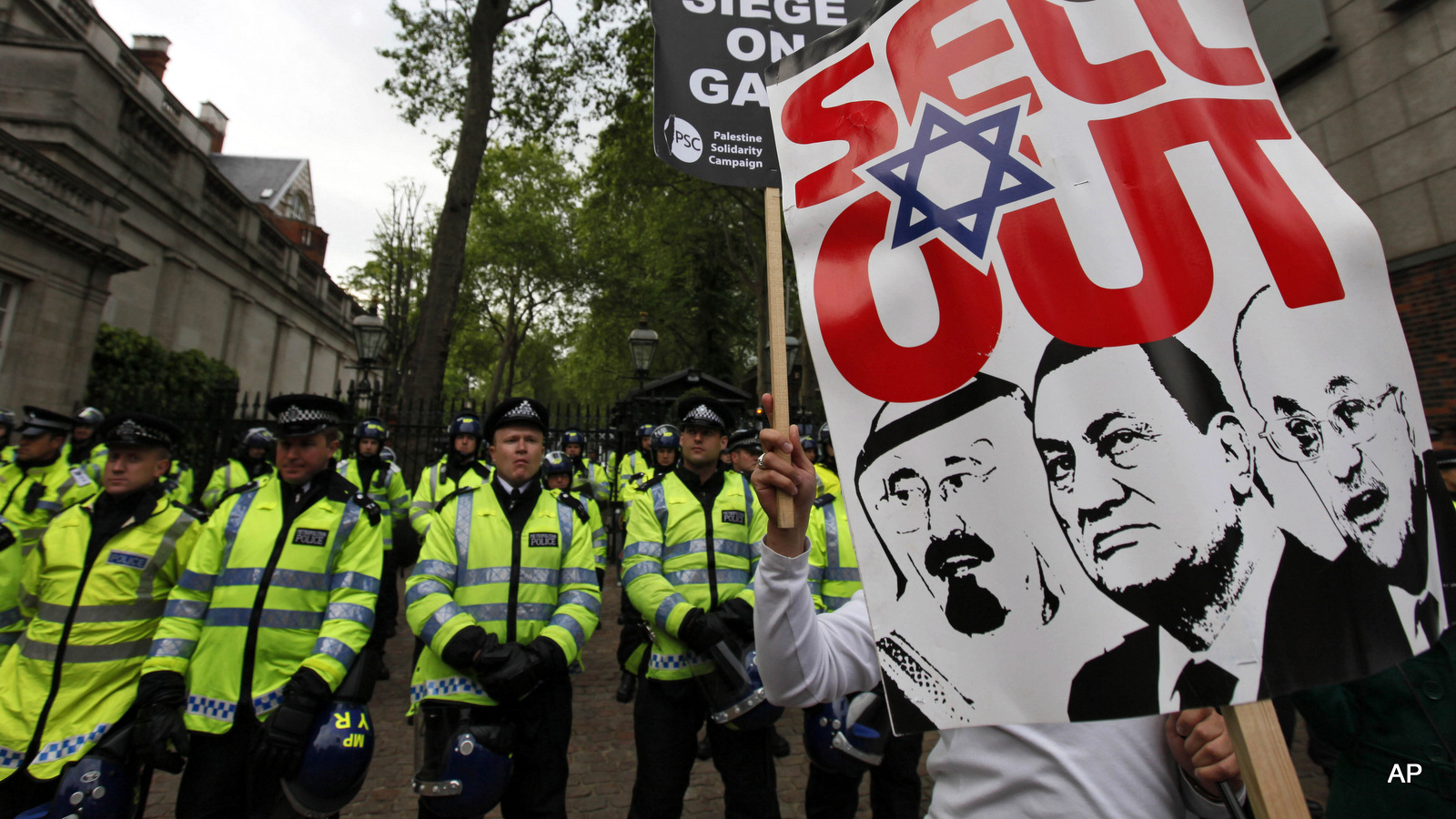 Backdropped by British riot police officers, a pro-Palestinian supporter, holding a placard depicting Arab leaders, from left to right, King Abdullah of Saudi Arabia, Egypt’s President Hosni Mubarak, and Palestinian leader Mahmoud Abbas, stands on the road that leads to the Israeli embassy, in a protest against Israel, in central London, Monday May 31, 2010. Israeli naval commandos stormed a flotilla of ships carrying aid and hundreds of pro-Palestinian activists to the blockaded Gaza Strip on Monday, killing nine passengers in a botched raid that provoked international outrage and a diplomatic crisis.

MINNEAPOLIS — Despite public hostility to Israel, Saudi Arabia is a close military ally of the nation. The two countries are closely aligned in their desire to undermine Iran, and they work together to support each other’s military objectives.

Israel and Saudi Arabia stand united in their public opposition to America’s impending deal with Iran over the Iranian nuclear program. Yet this collaboration runs far deeper. Israel has long claimed that Iran poses a serious threat to Israel’s safety and the survival of the Jewish people worldwide, despite the fact that Iran has the Middle East’s second largest Jewish population and allows Jews to hold positions in parliament. Israel has used the notion of the threat of Iran to justify a massive military buildup along its border with Iran and Syria, which Saudi Arabia supported with as much as $1 billion in funding, according to a 2014 report from Tikun Olam, a liberal Jewish blog that opposes the excesses of Zionism. [Editor’s Note: Tikum Olam is run by Richard Silverstein, who recently published a story with MintPress News about how the Israeli government has abandoned an Ethiopian-Israeli soldier being held in Gaza.]

International Business Times reported in May that in return for this Saudi support, Israel supported the kingdom’s battle against the Houthis in Yemen — an alliance revealed when Houthi rebels seized Israeli-made weapons from Saudi forces. With Iranian resources supporting the Houthis, the battle for Yemen has become a proxy conflict between Iran and its enemies, according to the Jerusalem Post:

“‘The changes that the Middle East has experienced in recent years have created a set of joint interests between the two countries,’ said Dr. Michal Yaari, an expert on Saudi foreign policy and a lecturer at the Open University…

‘The biggest enemy for both countries is Iran, and there are also the radical terrorist groups like ISIS [Islamic State] that threaten the regional order in the Middle East,’ Yaari said. ‘It is this overall framework that has created the conditions for cooperation between Jerusalem and Riyadh.’”

Saudi bombing of Yemen continues despite a massive humanitarian crisis caused by the airstrikes.

Middle Eastern countries opening up about support for Israel

Public opinion in the Middle East has been almost universally against Israel since its creation in 1948, when the illegal occupation of Palestine first displaced hundreds of thousands of former Muslim and Christian residents from their traditional homes to make way for a Jewish-only nation. But political upheavals throughout the region have pushed Persian Gulf countries to rethink their position over the years, leading to the formation of clandestine alliances that have gradually become more public, especially between Israel and Saudi Arabia.

A secret U.S. diplomatic cable from 2009 revealed by WikiLeaks shows the alliance between Israel and the Gulf Cooperation Council, an alliance of Middle Eastern countries that includes Saudi Arabia, dates back to at least that same year. These countries sought closer ties to Israel for two reasons: the perception that it would improve their relations with the U.S., which provides billions of dollars in aid to Israel annually, and a desire to counter Iran’s growing influence in the region. However, due to popular opposition to Israel’s brutal occupation of Gaza, the cable notes that these countries were “not ready to do publicly what they say in private.”

Yet that trend of secrecy is coming to an end, as The Intercept’s Murtaza Hussain reported last week:

“Last year, Saudi Prince Turki bin Faisal took the unprecedented step of publishing an op-ed in a major Israeli newspaper calling for peace between Israel and GCC nations, as well as for a resolution to the Israel-Palestine conflict. As the United States under the Obama administration has pursued détente with Iran in recent years, reports have also surfaced suggesting covert security cooperation between Israel and GCC states. The investigative news site Middle East Eye recently documented the existence of regular, secret flights between Abu Dhabi and Tel Aviv, despite the ostensible ban on Israeli citizens entering the UAE [United Arab Emirates].”

According to Hussain, the open alliance between former enemies means these Middle Eastern countries are abandoning their former opposition to Israel’s inhumane and illegal occupation of Palestine. He concludes that, “it seems clear that GCC leaders have decided in the wake of the Arab Spring to place their own narrow political interests above any publicly-stated principles about stability in the region.”