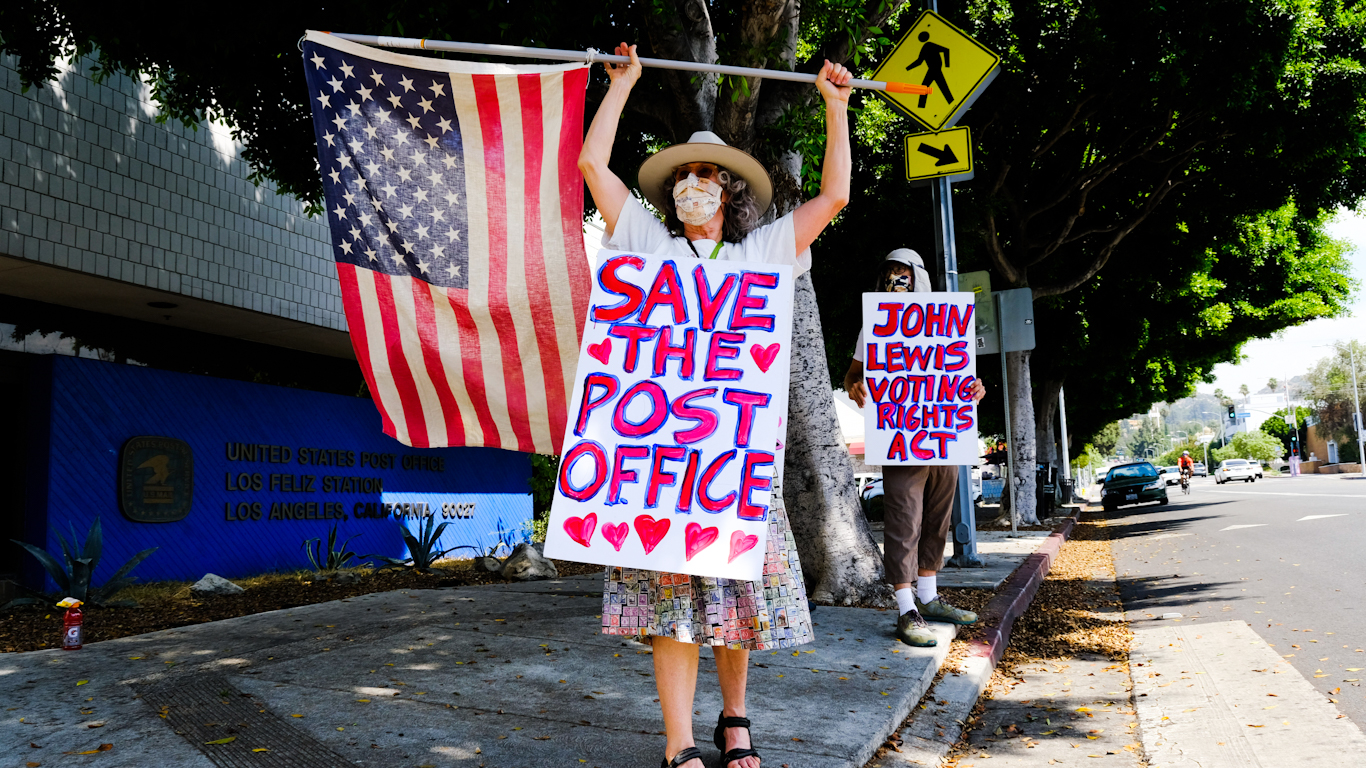 “A Coup in the Making”

Mail Sorting Machines Across America Dismantled Ahead of November Election

Some 671 mail sorting machines have already been decommissioned ahead of the upcoming presidential election, where record numbers of Americans are expected to vote by mail.

With little explanation from management, United States Postal Service (USPS) machines are being disassembled across the country. A USPS worker leaked images of a newly decommissioned machine — capable of handling 30,000 pieces of mail per hour — to NBC Montana. Local news outlet KUOW report that 40 percent of the post sorting machines in the Seattle-Tacoma area have been recently dismantled, to the dismay of the local workforce. “It would take a crew of 20 to 30 people hand-sorting the mail all night to do what one of these machines can do in a couple hours…Our infrastructure doesn’t work without these machines,” one worker said. “In our meetings with management, the union has been given no rationale whatsoever,” he added. Newly appointed postmaster general Louis DeJoy also ordered the removal of six huge sorting machines in San Antonio, Texas, and has ended the practice of paying workers overtime to finish delivery rounds, causing long delays. In total, some 671 machines nationwide have been decommissioned.

These are leaked photos sent to me by someone who wants to stay anonymous of what they say is a disassembled DBCS sorting machine in a MT USPS plant. I’m told the stackers are waiting to be sent to other facilities. #mtnews #USPS pic.twitter.com/ouW8zGty9k

The gutting of USPS capability comes amid a coronavirus pandemic that has infected at least 5.7 million Americans, claiming the lives of over 177,000, forcing many to rely on the postal service like never before. USPS will also play a critical role in the upcoming presidential election in November, where record numbers of Americans are expected to vote by mail. Indeed, any potential increase in cases might necessitate postal only voting in some areas due to the infectious nature of the virus.

Donald Trump has set his sights on mail-in voting and explicitly stated that he is attempting to undermine the practice. “They want three and a half billion dollars for something that’ll turn out to be fraudulent, that’s election money basically…Now they need that money in order to make the Post Office work so it can take all of these millions and millions of ballots,” the president said. “But if they don’t get those two items that means you can’t have universal mail-in voting because they’re not equipped to have it,” he added. Trump earlier casually admitted while calling into Fox News that if more people voted “you’d never have a Republican elected in this country again.” The president’s words echo those of conservative political activist Paul Weyrich, who in 1980 said that “I don’t want everybody to vote” because GOP “leverage in the elections quite candidly goes up as the voting populace goes down.”

Trump: “The things they had in there were crazy. They had levels of voting, that if you ever agreed to it you’d never have a Republican elected in this country again.” pic.twitter.com/KxMYxOnqbs

Speaker Nancy Pelosi recalled the House from its vacation in order to fight the changes being made to the postal service. DeJoy recently backtracked, agreeing to suspend all further changes until after the election. Yet testifying before the Senate homeland security and governmental affairs committee today, he stated that he would not restore the sorting machines already removed, arguing they were “not needed.”

This has failed to convince many civil rights organizations, including the Lawyers’ Committee for Civil Rights Under Law, the League of Women Voters, Public Citizen and the National Association for the Advancement of Colored People (NAACP), who have filed lawsuits against him, claiming that his actions amount to voter disenfranchisement. “As we approach the November election amid the ongoing COVID-19 pandemic, it is critical to ensure that every eligible voter has access to reliable mail service. The USPS’ decision to suddenly reduce services this summer has resulted in unacceptable mail delays that stand to profoundly affect the delivery of mail-in ballots and ballot applications,” said Sam Spital from the NAACP’s Legal Defense and Educational Fund. Public Citizen described DeJoy’s actions as “a coup in the making” for President Trump.

If we said that “schools are losing billions annually” it would obviously be laughably incoherent, because the point of schools is to provide a public service. Yet people say this with a straight face about USPS.

The COVID-19 pandemic has brought with it a reduced quantity of mail, resulting in the USPS hemorrhaging money. Yet many have argued that it is a vital public service and should be treated like one, and not subject to the pressures of the profit motive. The USPS delivers far more items than any other service and is the only one committed to delivering to every address in the country. It is also one of the few steady employers in many areas, particularly rural ones. Furthermore, the existence of the USPS allows a huge array of other businesses to flourish. According to successive Gallup polls, the organization is consistently rated as America’s favorite federal agency and a whopping 92 percent favor a government bailout of the postal service.

Even if voters do not intend to vote by mail, they might find it difficult to cast a ballot. Since the Shelby County vs. Holder decision of 2013, Southern states have closed at least 1,688 polling stations, including 750 in Texas, 320 in Arizona and 214 in Georgia. Perhaps more troubling is the specificity of so many of the closures. Eighteen Georgian counties have closed more than half of their polling places, and several have shut down almost 90 percent, according to a 2019 report. These have been primarily in lower income and majority black neighborhoods.

There are still nearly three months until the election that pits Democratic candidate Joe Biden with the incumbent Trump; plenty more time for more dirty tricks and October surprises. This will likely not be the last election controversy.