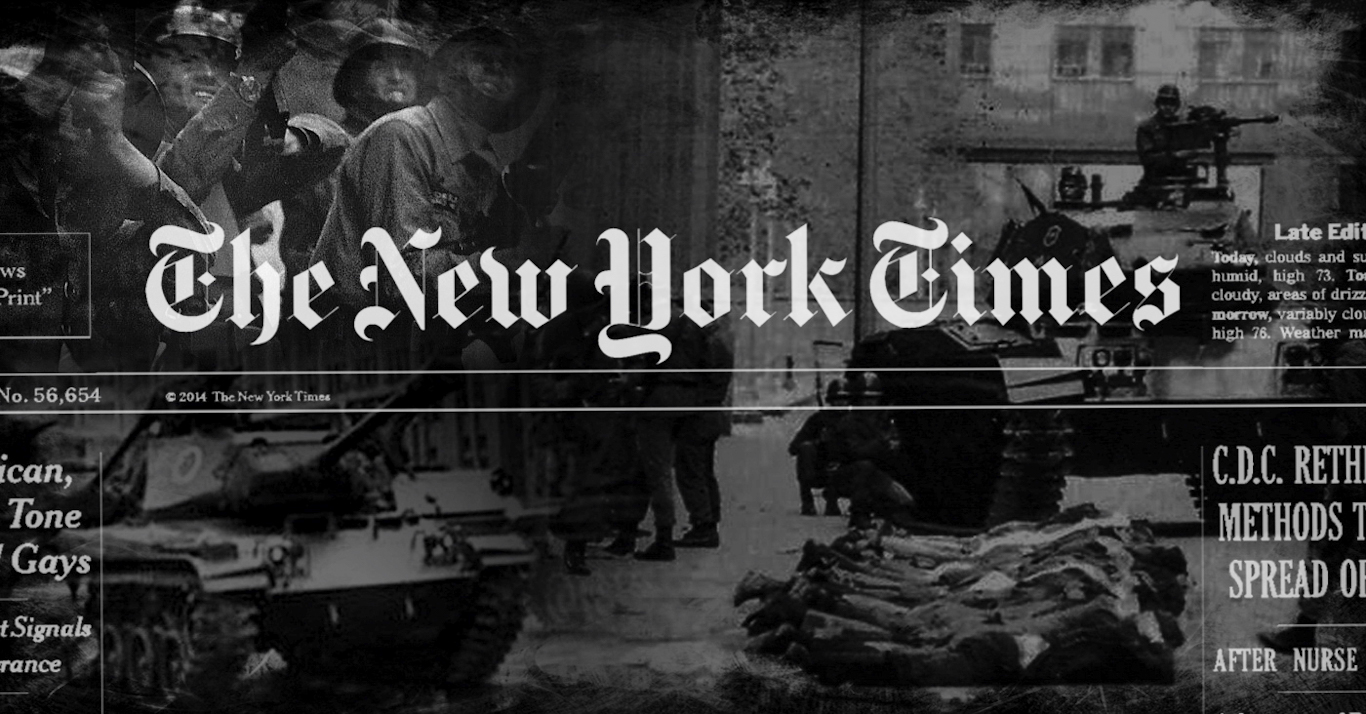 The New York Times Editorial Board, it seems, rarely meets a coup backed by the US government that it doesn’t approve of.

Bolivian President Evo Morales was overthrown in a U.S.-backed military coup d’état earlier this month after Bolivian army generals appeared on television demanding his resignation. As Morales fled to Mexico, the army appointed right-wing Senator Jeanine Añez as his successor. Añez, a Christian conservative who has described Bolivia’s indigenous majority as “satanic”, arrived at the presidential palace holding an oversized Bible, declaring that Christianity was re-entering the government. She immediately announced she would “take all measures necessary” to “pacify” the indigenous resistance to her takeover.

This included pre-exonerating the country’s notorious security services of all future crimes in their “re-establishment of order,” leading to massacres of dozens of mostly indigenous people.

The New York Times, the United States’ most influential newspaper, immediately applauded the events, its editorial board refusing to use the word “coup” to describe the overthrow, claiming instead that Morales had “resigned,” leaving a “vacuum of power” into which Añez was forced to move. The Times presented the deposed president as an “arrogant” and “increasingly autocratic” populist tyrant “brazenly abusing” power, “stuffing” the Supreme Court with his loyalists, “crushing any institution” standing in his way, and presiding over a “highly fishy” vote.

This, for democratic-minded Bolivians, was “the last straw” and forcing him out “became the only remaining option,” the Times extolled. It expressed relief that the country was now in the hands of “more responsible leaders” and stated emphatically that the whole situation was his fault; “There can be little doubt who was responsible for the chaos: newly resigned president Evo Morales,” the editorial board stated in the first paragraph of one article.

The Times, according to Professor Ian Hudson of the University of Manitoba, co-author of “Gatekeeper: 60 Years of Economics According to the New York Times,” remains America’s most influential news outlet in shaping public opinion.

“Despite the changing media landscape and the financial troubles of old school journalism models – including the New York Times – it remains the agenda setter. Social media often use or respond to Times stories. It is still probably the single most referenced news outlet in the U.S. Other websites, like Yahoo get more hits, but they do not report or create their own stories. The New York Times still ranks as the top investigative and opinion setting news organization” he told MintPress News.

The first draft of history

Newsrooms across America are sent advanced copies of the Times’ front page so they will know what is “important news” and adjust their own coverage accordingly. In this way its influence extends well beyond its nearly 5 million subscribers, its output becoming the first draft of history. Yet, when it comes to U.S. intervention, the Times offers its “consistent support” for American actions around the world, Hudson says, claiming that the latest Bolivia example “very much followed this trend.” Indeed, there has rarely been an effort at regime change that the paper did not fully endorse, including the following six examples.

In 1953, the CIA engineered a coup against the administration of Mohammad Mossadegh, installing the Shah as an autocrat in his place. Mossadegh, a secular liberal reformer, had angered Western governments by nationalizing Iran’s oil industry, arguing that the country’s resources should be owned by and used to benefit the people of Iran. The Shah presided over decades of terror and human rights abuses, finally being overthrown in the revolution of 1979.

The Times expressed a “deep sense of relief,” many felt that Mossadegh, a “fanatical power-hungry man” and a Kremlin stooge who had “wrecked the economy” in his “bid for dictatorship” had been deposed. The editorial board gave a warning to others who might try to nationalize industries owned by American corporations: “Underdeveloped countries with rich resources now have an object lesson in the cost that must be paid by one of their number which goes berserk with fanatical nationalism,” it wrote, two days after Mossadegh’s ouster.

Like Mossadegh, Brazilian President Joao Goulart was far from a communist; the center-left reformer who had been in power since 1961 modeled himself after John F. Kennedy. He was overthrown in a U.S.-supported military coup d’état that brought about over twenty years of fascist dictatorship that saw tens of thousands of people arrested and tortured.

Two days after the event, the Times’ editorial board announced, “We do not lament the passing of a leader who had proved so incompetent and so irresponsible.” As with Bolivia, it refused to use the word “coup,” instead claiming that Goulart, who “had almost no supporters,” was deposed in “another peaceful revolution.”

One month later, a report entitled “Brazil relieved by Goulart’s Fall” claimed there was “no outcry or even concern” over the events, but instead a “widespread feeling of deep relief and optimism” in the country. It stated that all of Brazil had “written off” the “extremist” and “far leftist” “regime” and supported the “revolt” against him. In particularly Orwellian fashion, it claimed that the “nation appears to have been yearning” for a “political clean up” of “extremists,” applauding the widespread imprisonment of officials in the Goulart administration on the grounds that they were “communists.”

The overthrow of the democratically-elected Chilean socialist Salvador Allende in 1973 and his replacement with the fascist dictator Augusto Pinochet is one of the most well-known and infamous events in CIA history. The fallout from Pinochet’s economic mismanagement and reign of terror continues to this day and provides the backdrop for the enormous anti-government protest movement currently engulfing the country.

As soon as Allende was elected, the Times began a campaign to demonize the new leader, claiming that Chile’s “free institutions” likely would not survive the “sharp turn to the left” he was proposing. The day after the coup, when Pinochet’s forces bombed the presidential palace and forced Allende to commit suicide, the Times editorial board blamed the President for his own downfall, just as it did with Morales and with Mossadegh, claiming:

No Chilean party or faction can escape some responsibility…but a heavy share must be assigned to the unfortunate Dr. Allende himself. Even when the dangers of polarization had become unmistakably evident, he persisted in pushing a program of pervasive socialism for which he had no popular mandate.

The front page of the New York Times on September 12, 1973. Photo | @OnThisDayNYT

It also pre-determined that the very obvious involvement of the U.S. government, conducting a campaign of economic war against Chile, in order to “make the economy scream” in the words of President Nixon and Henry Kissinger to the CIA, was non-existent. The board advised that “It is essential that Washington meticulously keep hands off the present crisis…There must be no grounds whatsoever for even a suspicion of outside intervention.”

In April 2002, the U.S. government bankrolled and supported a coup attempt against Venezuelan President Hugo Chavez. In a consistent pattern, the Times editorial board came out to heartily endorse proceedings, again deliberately refraining from using the word coup. Two days after the event it noted:

With yesterday’s resignation of President Hugo Chavez, Venezuelan democracy is no longer threatened by a would-be dictator. Mr. Chavez, a ruinous demagogue, stepped down after the military intervened and handed power to a respected business leader, Pedro Carmona.”

And like with other coups, the Times immediately treated the idea of U.S. involvement as utterly impossible, adding, “Rightly, his removal was a purely Venezuelan affair.”

What was unique about this event was that the coup was dramatically overturned by hundreds of thousands of people in the streets, who convinced military units loyal to Chavez to retake the presidential palace. Since then, successive U.S. governments have dedicated significant resources to regime change in Venezuela. The Times also applauded self-declared President Juan Guaidó’s attempt to gain power earlier this year, presenting him as a man of the people, claiming he was “cheered on by thousands of supporters in the streets and a growing number of governments, including the United States.”

But as Guaidó’s attempt collapsed under the weight of its own unpopularity, the Times expressed its anger that Maduro, a corrupt Russian agent, who pushed Venezuela “to utter ruin,” remained in power. “It would be a great relief for Venezuela to be rid” of Maduro, the editorial board mused, “the sooner the armed forces evict the thieves” the better, it said, disappointed that, for once, it could not celebrate a successful U.S. coup.

Studying the Times’ coverage of U.S.-orchestrated coup attempts, it becomes clear that there is a checklist of talking points it employs time and again to justify events.

To be sure, the New York Times is not the only major media outlet guilty of reflexively supporting every U.S. action around the world. The Economist and the Washington Post both came out to support the coup in Bolivia, as they had done before with Venezuela. But the Times’ position as “the paper of record” sets it apart in terms of importance.

This position makes it a crucial weapon in the propaganda war waged on the American people in order to manufacture consent for regime change abroad.