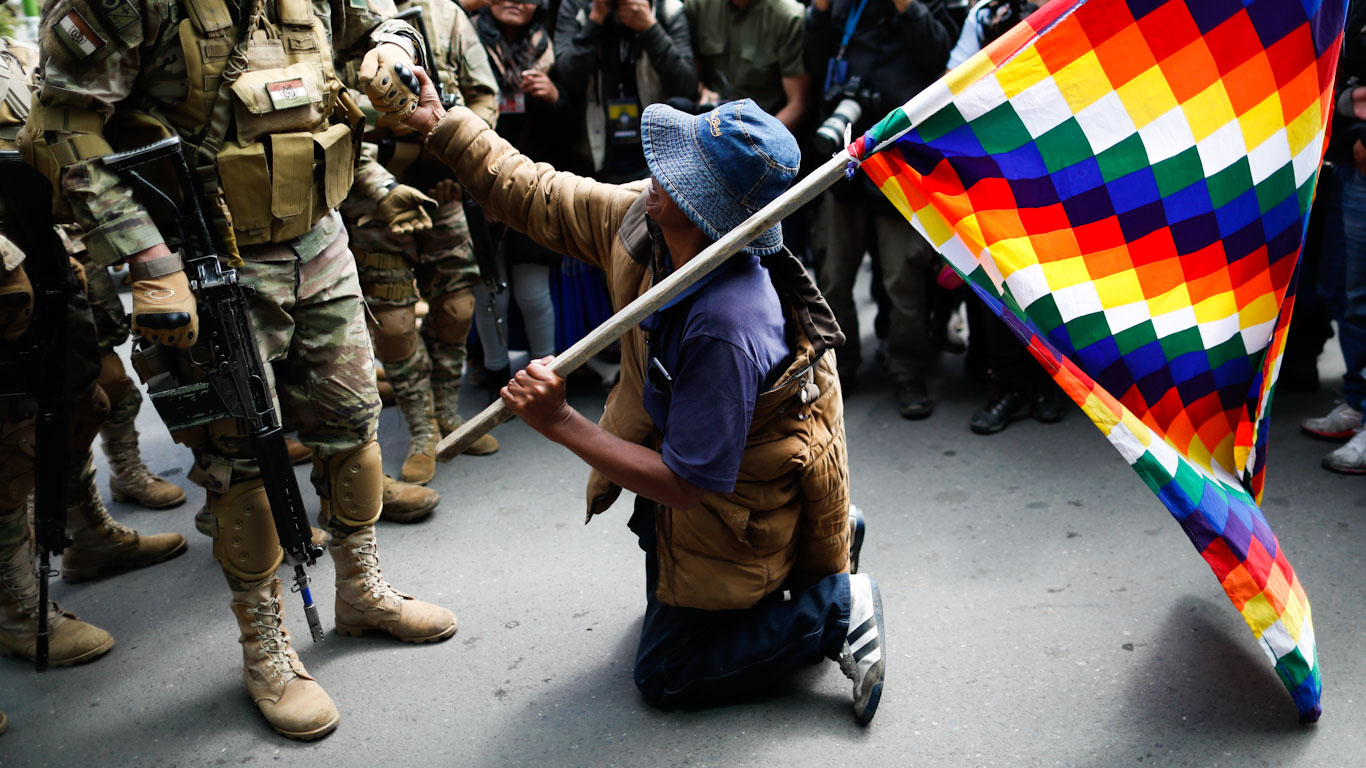 Both the corporate media and human rights groups have been silent as journalists and indigenous protesters have been targeted as Bolivia’s self-declared right-wing government uses violence to secure its tenuous hold on power.

Despite having been in power for only one week, the new Bolivian coup government of Jeanine Añez has already turned the powers of repression onto the population, using live rounds on demonstrators protesting the forceful removal of President Evo Morales from power on November 10. Morales has sought asylum in Mexico.

The death toll, according to Bolivia’s national ombudsman, has risen to 23, with more than one thousand people arrested. That figure includes the victims of the Cochabamba massacre, where soldiers and police killed nine indigenous protesters Friday.

Footage emerging from Cochabamba, Bolivia shows the aftermath of a massacre of indigenous protesters carried out by coup soldiers and police. This will be ignored by western media. pic.twitter.com/phGHgJPsea

The full scope of the armed forces has been unleashed on demonstrators, with security forces using live ammunition, tanks and even attack helicopters to destroy resistance to the coup. Much of Bolivia’s security state, including many of the leaders of the coup, were trained by the FBI and by the notorious School of the Americas in Fort Benning, GA, a U.S. Army installation where many of the most brutal death squads and torturers in Latin American history cut their teeth. Those skills are now on show in Cochabamba. “Death squads unleashed in Bolivia: the coup regime has granted immunity to soldiers who shoot protesters. In just days they’ve shot hundreds of people,” announced Green Party Presidential candidate Jill Stein via Twitter.

Images and video of the deadly events immediately began circulating on social media. The scenes of panicked protesters fleeing gunshots or desperately checking dead or dying bodies shocked many: “We’re watching the rounding up and killing of indigenous people in Bolivia in real time by right wing forces supported by the US. This should be a top story,” said journalist Rania Khalek. But the massacre is largely being downplayed in the mainstream press, who overwhelmingly supported former President Morales’ ouster, framing events not as a coup, but as Morales “resigning” from office. When reported on at all, the events are often euphemistically referred to as a “clash” between Morales supporters and government forces, removing all agency and culpability from their headlines. To date, no mainstream Western outlet has used the word “massacre” or similar, in headlines to describe the events.

A woman looks at the coffin of an Evo Morales supporter killed by security forces, in Sacaba, Bolivia, Nov. 16, 2019. Juan Karita | AP

Likewise, the crescendo of violence has elicited a muted response from the professional human rights industry. Indeed, as hundreds of casualties were being taken to hospital, Human Rights Watch Director Ken Roth all but came out to support the coup, declaring that Añez’s coup was actually “defending democracy” against the “electoral fraud” of Morales. Both Human Rights Watch and Amnesty International refused to condemn the coup or the repression in their statements on the violence.

Hospitals across the country have been inundated with hundreds of people injured during the crackdown, a problem made worse by the fact that the new government has attacked, detained or deported hundreds of Cuban medical personnel who constitute the backbone of Bolivia’s public health services.

A License to Kill for Bolivia’s Security Services

Añez ominously announced that she is committed to “taking all measures necessary” to “pacify the country.” This included an official order pre-exonerating all security services from any crimes committed during the “re-establishment of order,” effectively giving the army and the police a license to kill anyone who resists the new government.

Añez, a fundamentalist Christian, first arrived at the Presidential Palace in La Paz November 12 brandishing an oversized, leather-bound Bible, shouting at reporters “the Bible is returning” to Bolivia. She has previously declared the country’s indigenous population (who make up, by most counts, almost 90% of the population) as “satanic” and claimed that they should not be allowed to live in Bolivia’s cities, only in the desert or highlands.

Jeanine Añez holds a Bible after she declared herself the country’s interim president of Bolivia in La Paz, Nov. 12, 2019. Juan Karita | AP

Morales was the country’s first indigenous ruler since the Spanish invasion five centuries previously. Security forces loyal to Añez publicly removed and burned the indigenous Wiphala flag patches from their uniforms, a symbolic gesture showing their commitment to the re-establishment of a white supremacist state.

Añez’s party, the Democrat Social Movement, won 4% of the vote in the October elections, making it the fourth-largest party in the country. In comparison, Morales received 47%. Nevertheless, the United States government has lent its full support to Añez, the White House “applauding” the military overthrow. Likewise, media has presented her positively as a “women’s activist” “setting a conservative, religious tone”.

Her colleagues in government share similar far-right backgrounds. Coup leader Luis Fernando Camacho is part of a Neo-Nazi paramilitary group that wears the Iron Cross and other fascist regalia and practices the Roman (Sieg Heil) salute.

A War on the Media

However, Bolivia’s indigenous population is not the only target of police and military repression; multiple journalists covering the protests have also been shot. Meanwhile, Al-Jazeera correspondent Teresa Bo was tear-gassed in the face live on air at point-blank range by riot police, as she stood alone, away from the protests, talking to camera. The new government forced Bolivia TV off the air, while one TeleSUR journalist in Bolivia found that virtually every channel was dedicated to Añez. Her new Communications Minister, Roxanna Lizárrage announced that she intends to persecute journalists involved in what she called “sedition”, adding that she already has compiled a list of “troublesome members of the media.”

The most heartbreaking video of all…

The moment when a mother discovers her son amongst the dead today in Sacaba, Cochabamba, following the massacre of the protests by the government troops. #GolpeEnBolivia pic.twitter.com/PTFIKgLfse

Organized resistance, from indigenous groups, trade unions and Morales’ Movement to Socialism party appears to be growing. However, the new government has made it absolutely clear that it intends to stay in power by any means necessary. The following few days will decide what direction Bolivia will take.