What is in a cartoon? Who knows what Michelangelo’s political opinions were? What would he have thought about Palestine? We will never know. But there can be little doubt that had he seen this cartoon by the Palestinian cartoonist Mohammad Sabaaneh, he would have been moved. I recently visited Italy and saw Michelangelo’s masterpiece, the Pietà. It is so powerful that it draws you to the point where you feel the pain of the mother, Mary, holding the dead, limp body of her young, crucified son. It is a powerful image that recreates the moment that is perhaps more painful than any we can imagine: a mother grieving over her slain son. What could be worse than parents burying their children?

A Palestinian mother and son

The story of Jesus took place in Palestine. Michelangelo’s Pietà is an image of a Palestinian mother holding her young son who had just sacrificed his life for others – a Shahid in the purest sense of the word. Mohammad Sabaaneh, the brilliant political cartoonist living in Ramallah, has recreated Michelangelo’s masterpiece and made a bold political statement – Palestinian mothers, in this case represented by the city of Nablus, are burying their sons.

Mohammad Sabaaneh is a political cartoonist who has created some of the most powerful images of the Palestinian tragedy. His work is replete with images of mothers and children, orphans and bereaved parents, and prisoners in Israeli jails. This particular piece encapsulates the young innocent face of a young Palestinian mother, in this case, Mary, her entire body created by the ancient city of Nablus where so many young people are giving their lives. It is within this city that so many young Palestinian lives are being taken by the brute force of the Israeli war machine because they dare to stand.

While the image of the mother is still that of Mary, although created by the stones of the city of Nablus, Jesus, the sacrificed, the Shahid, is a young Palestinian, in jeans and a t-shirt. His face is covered in a Palestinian kufiya, which has become the most adored symbol of resistance to oppression.

Children crucified to the star

Rayan Suleiman was 7 years old. He was walking home from school when he and his brothers were chased by Israeli soldiers. By the end of the chase, Rayan was dead. According to Al Jazeera, “Doctors at a hospital in Beit Jala, a Palestinian town south of Jerusalem, could not resuscitate him. A pediatric specialist, Mohamed Ismail, said Rayan was healthy and had no previous medical conditions.”

Furthermore, Dr. Ismail said, “The most probable scenario of what happened is that under stress, he had excess adrenaline secretion, which caused the increase of his heartbeat,” and he added, “He developed cardiac arrest.”

The faces of Ahmed Manasra’s parents tell the tale of tortured people who are helpless in the face of the forces who took their son. Ahmed is “my first joy,” his mother says. But those forces then, “brought him to ruin.” The “ruin” that she is talking about is severe emotional issues, illusions, and constantly scratching and hurting himself. All of this is a result of the torture, both physical and emotional, he suffers at the hands of his Israeli jailers.

The agony of this boy, who was arrested at thirteen of “terror” charges. His pain is evident in this Sabaaneh cartoon. Amhed Manasra is both a child and a prisoner being tortured by the brutal Israeli apartheid regime. Manasra has spent many months is solitary confinement, which is considered a form of torture. “He is alone all the time, in isolation. He has no one to talk to, just the four walls surrounding him.” Ahmed’s father told me when I spoke to the family at their home in Jerusalem’s Beit Hanina neighborhood. “When we visit him he cannot sit still, he is a wreck, the guards keep coming and shoving him onto the chair.”

“I have not been able to touch him for seven years, not even his finger,” His mother said, “I kiss him through the glass.” 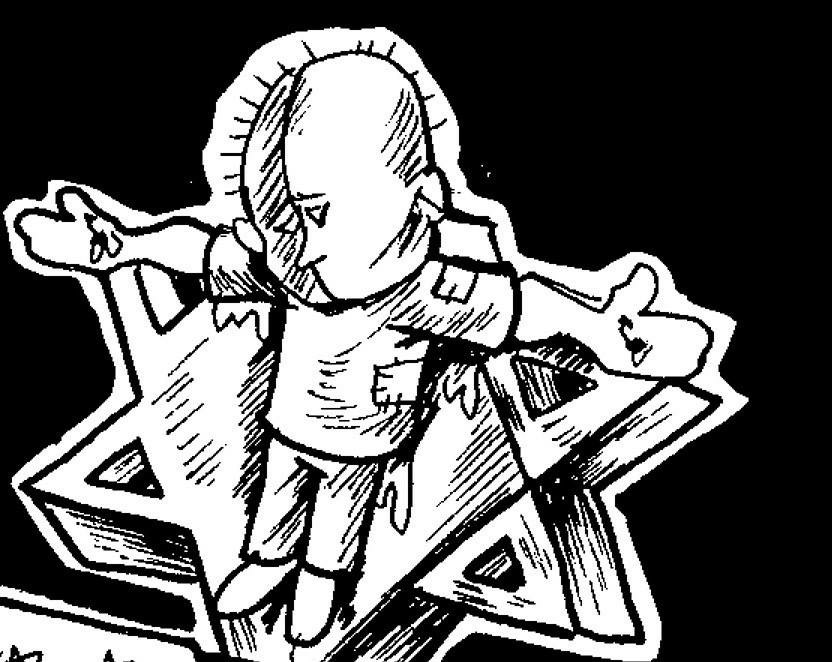 This is a small, almost undetectable detail in a larger piece by Sabaaneh. This is a Palestinian, a poor refugee boy with patched clothes nailed to the six-point star – something which has become the symbol of the apartheid state. Although Palestinian children, even ones living in the worst conditions imaginable, are by and large vibrant and full of life, the reality into which they are born is predetermined by a cruel apartheid regime that rules their land and governs their people.

Palestinian children exist in a reality that is so cruel that one sometimes finds it hard to adequately describe it in words. However, Mohammad Sabaaneh nails it in his cartoons. What we may find hard to describe is what he expresses in his art. Knowing what Palestinian children go through, be they rich or poor, refugees or citizens of Israel, this little boy crucified to the Zionists’ star says is all.

It can’t be easy to portray pain, suffering, courage and resistance all at once. Yet in these cartoons, among many others, Sabaaneh manages to combine all of these elements. He has been arrested and harassed by the Israeli authorities, and he even angered the Palestinian Authority in Ramallah.

One does not need to be an art critic to see how brilliantly Sabaaneh represents the Palestinian experience through his art. He has published several books of his work, all of which are wonderful expressions of these experiences, including an illustrated novel which details his own experience in an Israeli jail. He is an incredible talent and an incredible fighter.