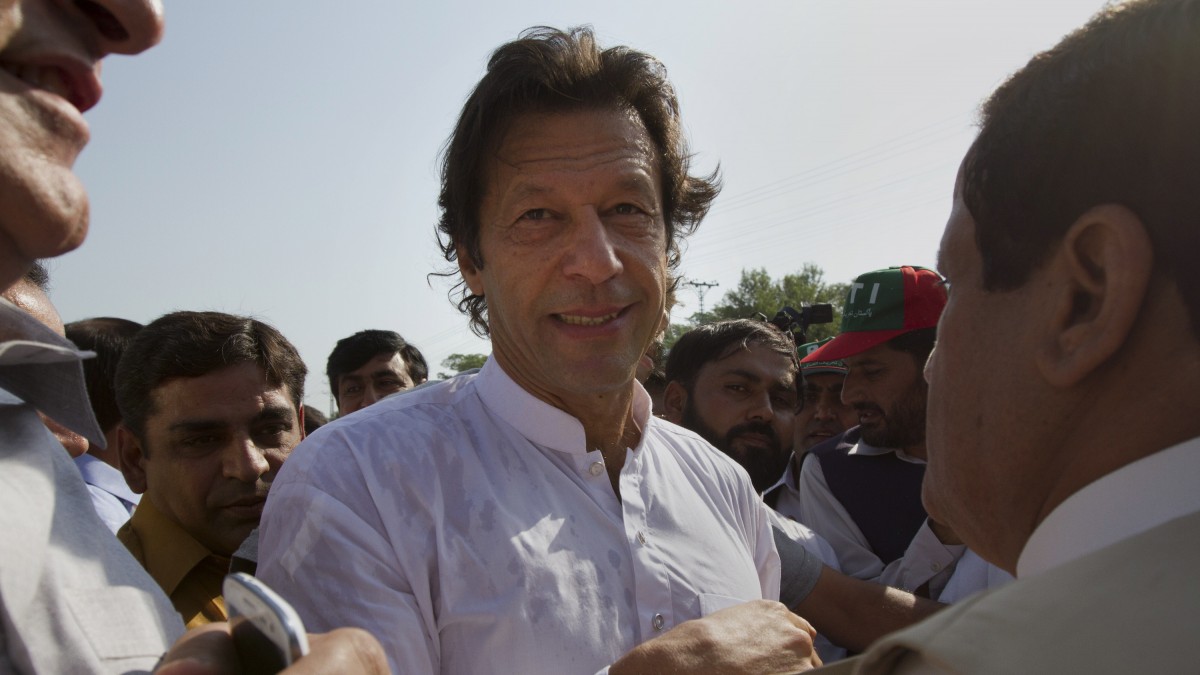 Pakistan’s ex-cricket star-turned-politician Imran Khan, center, is surrounded by his supporters as he arrives to lead what organizers are calling the “peace march,” in Islamabad, Pakistan, Saturday, Oct. 6, 2012. (AP Photo)

US peace activists joined politicians, lawyers and the world’s press on Sunday as they attempted to march into Pakistan’s tribal region in protest at the CIA’s drone campaign.

The two-day march, organised by Imran Khan, the cricketer-turned-presidential hopeful who leads the Pakistan Tehreek-e-Insaf party, set out from Islamabad on Saturday aiming to hold a rally in Kotkai, a town in the Waziristan border region that has seen most drone strikes. Access to Waziristan is tightly controlled and usually impossible for foreigners.

Tens of thousands of locals defied threats from the Taliban to join a convoy of vehicles that stretched 15km, according to Clive Stafford Smith, director of legal charity Reprieve. The convoy, accompanied by journalists from around the world, paused overnight in Dera Ismail Khan – where locals welcomed visitors with barbecues, according to attendees.

The convoy left for Waziristan on Sunday morning despite warnings that the authorities would prevent it from entering the region.

‘We had been told we were going to be stopped by the authorities – but we were such a massive group that there was no way they could stop us: we went through a series of roadblocks,’ Stafford Smith told the Bureau. He described how the authorities blocked off roads using shipping containers – only for marchers to heave them out of the way.

But the obstacles slowed the convoy and, having fallen behind schedule, it turned back before reaching Waziristan, and Khan held the rally outside the town of Tank attended by tens of thousands – Stafford Smith explains the rally was initially to be held in a stadium, but had to move outside to fit everyone in.

To many, it was no great surprise that the convoy did not make it to Waziristan.

‘We didn’t think we would get all the way to Kotkai – we were delighted to get as far as we did,’ said Medea Benjamin, of US peace activist group Code Pink. She added that members of her group were startled even to be granted visas for Pakistan.

‘I thought it was highly unlikely that we would even get to Dera Ismail Khan… We got further than everyone said we were going to get,’ said Stafford-Smith. ‘Nothing would have stopped us from getting into Waziristan apart from the delays imposed on us by the government.’

Despite not reaching Waziristan, Imran Khan and the attendees the Bureau spoke to insisted the march had been a success.

‘For us it was a tremendous success, because we got a chance to interact with local people and show them there are Americans who are against Obama’s policies,’ said Benjamin. ‘What we perceived was tremendous warmth and excitement that Americans had come so far [to show solidarity].’

‘The real goal was to provoke discussion of the drone issue, and that goal was reached on Saturday, long before we got to Dera Ismail Khan: there was a great deal of international and Pakistani coverage that was by far the most important goal,’ said Stafford Smith.

‘The aim was to highlight the issue and develop [the] international narrative,’ said human rights lawyer Shahzad Akhbar, who has launched legal cases on behalf of drone victims. ‘That aim has been achieved – and at the same time, there was a show of solidarity to the drone families and tribal population that’s living under drones.’

During the trip to Pakistan, peace activists also met with the acting US ambassador Richard Hoagland at the embassy in Islamabad to present a protest letter signed by 3,000 people – including author Alice Walker and film directors Oliver Stone and Danny Glover. Citing data by the Bureau indicating that at least 474 civilians have died in CIA drone strikes, the letter called for ‘an immediate moratorium’ on the attacks.

During the meeting activists claim Hoagland became the first US official to comment publicly on the US tactic of targeting rescuers. According to Robert Naiman of Just Foreign Policy, when challenged on why the US carries out such strikes, ‘Hoagland said that there are never any deliberate strikes against civilian rescuers and that he has never in recent times seen any deliberate strike on rescuers.’

A spokesman for the US embassy said the meeting was private and declined to comment on the ambassador’s reported remarks. ‘Ambassador Hoagland did meet with Code Pink [and other activists] and received the petition. The right to free expression is enshrined in the Constitution and they are entitled to their views,’ he added. ‘The US has publicly addressed the legality of drone strikes, most recently in comments by John Brennan, and I would refer you to them.’

In May, Brennan made a speech insisting drone strikes were legal, ethical and necessary, adding the US puts a ‘premium’ on protecting ‘innocent civilians’.

Medea Benjamin said many issues reported by the Bureau – including strikes targeting rescuers and significant civilian casualties – were echoed in what locals told her.

‘There’s a direct relationship between what we heard on the ground and what’s reported by the Bureau of Investigative Journalism and Stanford University’s study – whether it’s talking about the high number of civilians killed, the targeting of rescuers or the terrorising of the local population,’ she said.

‘We also got a first-hand sense of how counterproductive the drones are by hearing of the desire for revenge from people who have lost loved ones.’

Yesterday, Imran Khan announced plans to hold another anti-drone demonstration at the United Nations building in New York – hours after drones fired four missiles into a house near Mir Ali in North Waziristan, reportedly killing up to six alleged militants.