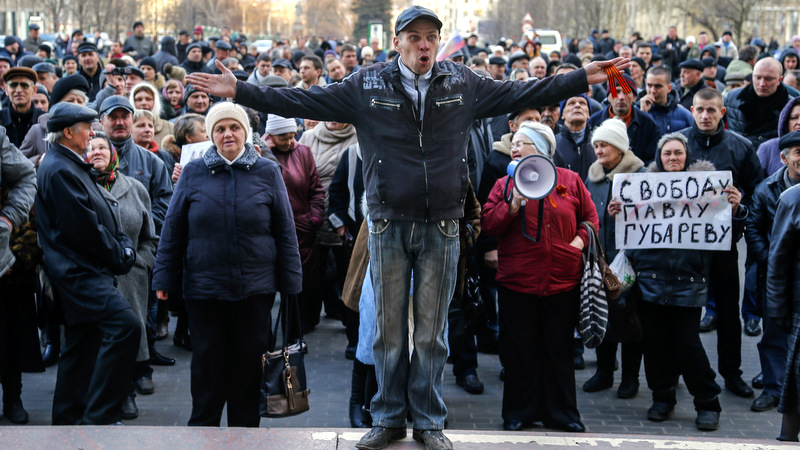 Recent events in Crimea are giving Russia’s neighbors the chills, but experts say there’s no need to panic just yet.

As the crisis in Ukraine deepens, alarmist drum rolls can be heard ever more distinctly.

The language is fraught with historical portent. Words like “appeasement,” “Sudetenland,” and  “anschluss” conjure images of Europe’s darkest days.

Former Secretary of State Hillary Clinton was even more direct at a private fundraiser in California last week.

The conclusion: Russian President Vladimir Putin is intent on widening his empire, and is ready for all-out war in order to do so. If he is not stopped now, global catastrophe beckons.

Relax, say the experts. While dangerous in its own right, the crisis in Crimea should not be seen as Putin’s first step toward world domination.

“This is about Ukraine,” said Thomas de Waal, senior associate at the Carnegie Endowment for International Peace. “If Putin were indeed Hitler, he’d be in Tbilisi and Kyiv by now.”

“We should not be engaging in wild fantasies of Russia taking over the world,” said Anatol Lieven, professor of war studies at King’s College London. “This is about Ukraine.”

But the image of Russian soldiers in Crimea — even if Moscow denies their existence — has shaken other countries in the neighborhood to the core.

The Baltic states, which include Latvia, Estonia, and Lithuania, have been urging the West not to forget the past. They fell prey to Soviet expansionism in 1940, and spent more than 50 years in the uncomfortable embrace of the Kremlin. When they finally achieved their independence in the 1990s, they lost no time reintegrating into Europe. Today all three are members of NATO and the European Union.

“Russia today is dangerous,” Lithuanian President Dalia Grybauskaite told reporters at an emergency meeting of European Union leaders in Brussels last week. “After Ukraine will be Moldova, and after Moldova will be different countries. They are trying to rewrite the borders after the Second World War in Europe.”

“Thanks be to God, we are NATO members,” Grybauskaite said, according to the Financial Times.

The ambassadors of the three Baltic states were on CNN’s State of the Union Sunday morning, issuing words of caution.

“We are at the crossroads of history,” said Zygimantas Pavilionis, the Lithuanian envoy to Washington. “We in the Baltics, we are the countries who transited from the bad world to the good world, so we have a moral right to ask. What do we do with people like Mr. Putin who is trying to use all the resources of his country to promote that world of ‘never again’” — the world of occupation, repression, disregard for human dignity.

If action is not taken, Pavilonius said, the West has only itself to blame.

“In Seattle, I saw that ugly monument to Lenin there,” he said, referring to a statue of the late Soviet leader on display there since the 1990s. “So, one day you will wake up and instead of ‘Go Huskies’ you have those self-defense units without insignia with Russian plates defending you.” By which he meant: If we don’t do something, people in Seattle will have a lot more to worry about than the fate of their favorite football team.

The Estonian ambassador was a bit more sanguine about the dangers the three small nations face.

“From a security point of view a lot has changed,” Marina Kaljurand said. “We are part of NATO, part of the EU. … It is not a problem for the Baltics, it’s much more global.”

The Baltic states need not fear any direct Russian aggression — there is very little chance that Russia would risk a direct confrontation with NATO.

The US has sent fighter jets to Poland and Lithuania, and a warship to the Black Sea, but for now that will be the extent of its show of military might.

But if Russia is not trying to recreate the Soviet Union, then what exactly is going on?

Some have speculated that Putin is out of touch with reality or even that he is out-and-out crazy.

But this ignores some very real facts on the ground, says Igor Lukes, professor of international relations at Boston University.

Putin knows full well what he is doing — trying to restore Russia’s stature as a great nation.

“With Ukraine, Russia is a superpower,” Lukes said. “Without it, Russia is Sweden.”

Putin is no Cold Warrior, he asserts. The Soviet leaders were committed to a failed ideology, and were prepared to sink the state rather than admit that Marx and Lenin were on the wrong track.

Putin is working from a much more pragmatic basis.

“He represents Russia,” Lukes said. “And after all, Russia is a legitimate country with legitimate interests.”

Pundits across the political spectrum have cited the example of Georgia, which fought a mini-war with Russia in 2008 over Abkhazia and South Ossetia, two separatist regions within Georgia’s borders.

Russia’s actions in Georgia, they say, serve as a clear illustration of what happens when the West does not respond to Russian aggression.

But de Waal, an expert on the Caucasus region, cautions against too close an analogy between Ukraine and Georgia.

“There are clear parallels [between Georgia and Ukraine], to be sure,” de Waal said. “But there are very definite differences. What is happening in Crimea is plainly illegal. In Georgia it was a lot more complicated.”

Mikheil Saakashvili, who was president of Georgia from 2004 to 2013, has been sounding the alarm, writing op-eds and giving interviews exhorting the West to stand up to Russia.

This is more than a bit disingenuous, says de Waal.

It was, in fact, Georgia that attacked Russian forces in South Ossetia in 2008, claiming provocation from the Russian side. Later investigation suggested that there had been no provocation from Russia.

But the Georgia case should still serve as a cautionary tale for Ukraine, Lieven says.

“All the talk of bringing Georgia into NATO made Saakashvili think he had our support,” he said. “It’s irresponsible to help create a civil war if we won’t fight. Thank God we’re counseling restraint in Ukraine.”

Given the West’s very limited options, it may be time for a bit of realpolitik. According to former Defense Secretary Robert Gates, Crimea is already gone.

“No question it’s an aggressive, illegitimate act,” Gates told Fox News’ Chris Wallace on Sunday. “The question is whether anybody can do anything about it… I do not believe … that Crimea will slip out of Russia’s hands.”

“Crimea is a fait accompli,” he said. “Now we look to Ukraine itself. It is easier for Putin to fight than to focus on problems at home. Low life expectancy, alcoholism, education — these are hard things. For Russia, the easy things always involve tanks.”