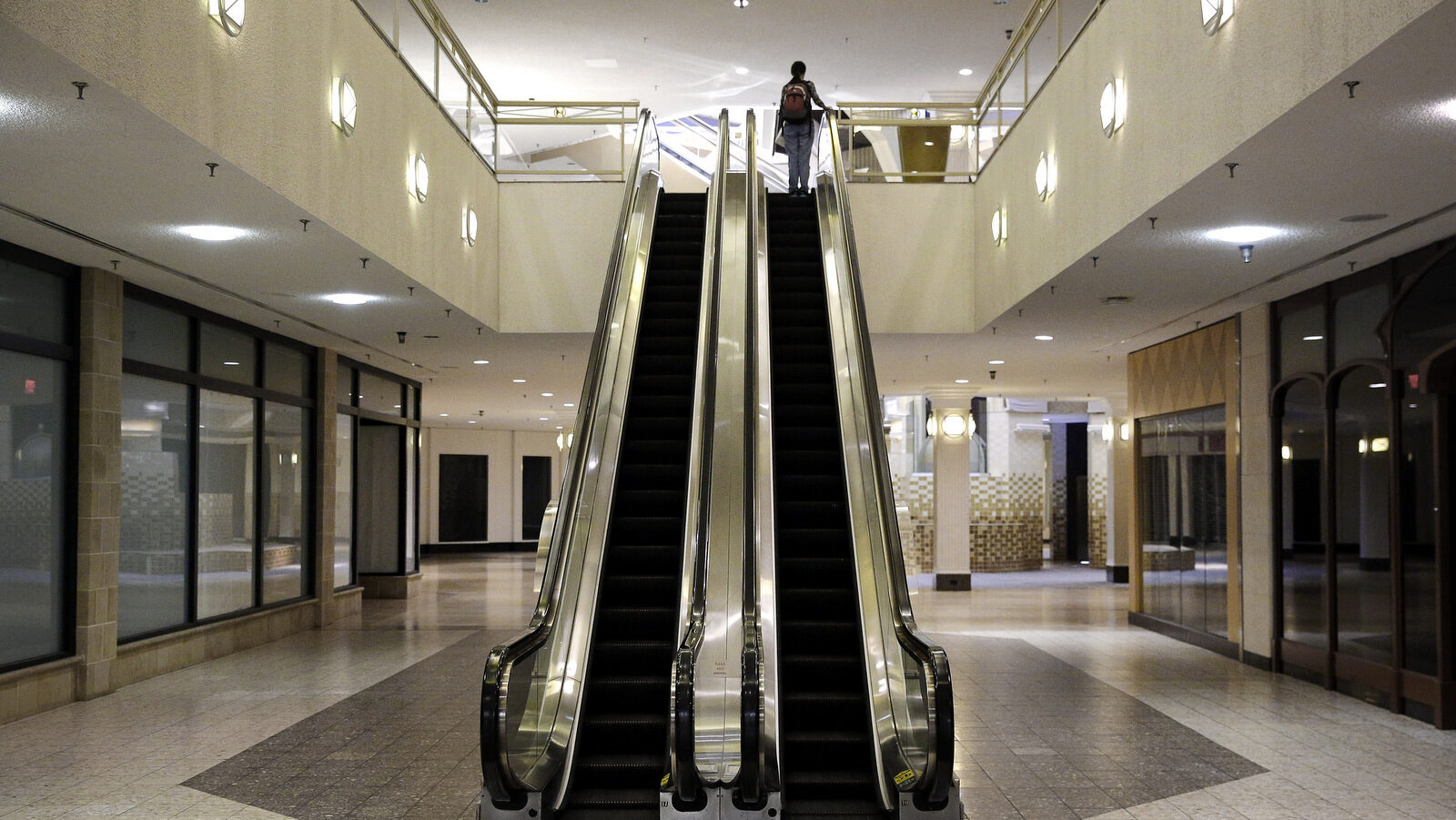 INDIANAPOLIS – On a recent weekday afternoon in March, the Goodwill store on this city’s east side was buzzing with nearly two dozen shoppers – young and old, black and white, Latino and Asian — rummaging excitedly through the rows of blue jeans, piles of shoes, and shelves of luggage, books, and picture frames in a hunt for the best bargains to be had.

“I get everything from thrift stores these days,” one young African-American woman told MintPress as she sifted through blue blazers, looking for a size 44 regular for her boyfriend. “Ain’t nobody got money for Macy’s these days,” she says dismissively.

Directly across the street from the Goodwill store on East Washington street sits the leviathan Washington Square Mall, but the scene and the energy are altogether different. Save for a handful of cars, the potholed parking lot was empty, and inside the mall it’s as still and silent as a tomb. Gone are the Sears and Kohl’s department stores that once anchored the 936,000 feet of retail space, and in their place is a dance studio, a shoe store, a specialty shop selling obscure videos and DVDs, and practically any vendor who can come up with the deeply discounted rent that is only a third of what it once was.

Once the beating heart of Western consumer culture — featured prominently in teen-angst movies like the cult classic Fast Times at Ridgemont High in 1982 and Mallrats in 1995 — the American shopping mall is dying. Nearly 9,000 retail stores closed last year, and financial analysts believe that between a quarter and a third of the country’s 1,100 enclosed shopping malls will close in just a few year’s time. And leading the march to extinction are some of the nation’s most iconic consumer brands like Sears, Macy’s and JCPenney.

The consensus among the financial press is that brick-and-mortar retailers are no longer viable in this age of e-commerce and online shopping from the comfort of a living room desktop, a kitchen laptop, or an iPhone on the subway.  But an unremarkable street corner in this unremarkable city in the middle of the country fingers another, more sinister suspect in this commercial serial killing: In these final days of the American working class, consumers simply don’t have the buying power they once did.

While middle-income retailers atrophy like leaves in a dry season, the holding company that owns discount retailers TJ Maxx and Marshalls opened 260 new stores last year. Following better-than-expected earnings last year, the discounter Dollar General plans to open 900 new stores this year, remodel another 1,000 and relocate 100. In 2017, Dollar General opened 1,285 new stores, and remodeled or relocated another 760. And here in central and southern Indiana, Goodwill has opened 50 stores since President George Bush exhorted a grieving nation to go shopping after the September 11 attacks in 2001.

“All of the discount stores have seen significant growth over the last decade as consumer shopping habits change, Kent A. Kramer, the president and CEO of Goodwill of central and southern Indiana told MintPress, adding:

And we expect to continue to grow as it becomes cool to find bargains. We get customers who take public transportation and driving late-model luxury cars. It’s cool now to go to your co-workers and say, ‘hey, look what I got for seven or eight bucks at Goodwill.’ ”

Goodwill’s gains result from the typical American worker’s losses. When adjusted for inflation, today’s average hourly wage has no more purchasing power than it did in 1973. Consumer debt has soared: the average household in the U.S. owes $16,000 in credit card loans, $27,000 in car loans, $48,000 in student loans and $169,000 in mortgage debt. The combination of stagnant wages and growing debt payments leaves little left over for shopping.

At one social service agency in this city, a 49-year-old social worker named Erin told MintPress, the mostly female workforce trades clothes, bundling used pants, sweaters, coats and shoes in trash bags and regularly bringing the clothes to work for co-workers to sift through.

The exchange began five or six months ago, Erin said, when her niece lost weight and gave her old clothes to her favorite aunt to distribute. Now, it is a weekly occurrence and sometimes coworkers will bring in bags filled with clothes and shoes on the same day. “I’ll grab one bag,” Erin said, “and [a co-worker] will grab another and we’ll take out what we want and pass it on. We’re all struggling financially and looking for ways to get what we need.”

Kramer said that online sales account for about 10 percent of Goodwill’s sales nationwide, but the shift to discount retailers is far more attributable to economic theories that date back centuries rather than to evolving commercial technology. The stock class loathes nothing so much as paying employees high wages, which cheapens the value of money and triggers inflation. Inflation conspired with rising energy prices to produce the stagflation crisis that peaked in 1973, sparking an effort by the financiers to cut wages by shipping jobs offshore and loaning money to workers rather than paying it out as wages.

The dilemma is instantly recognizable to anyone familiar with the German philosopher Georg Wilhelm Friedrich Hegel’s master-slave dialectic, which posits that while the slave — or employee, in an industrial context — is dependent on the master, or employer, the boss also depends on the worker to both produce and buy his goods and services. Without demand, the market collapses and, writ large, so does the overall economy over time.

The death of the American shopping mall reflects the twilight of an American middle class that was the most prosperous of the Industrial era, imbued with unprecedented purchasing power by New Deal-era public infrastructure investments, and trade unions heavily influenced by a radical vanguard of Communists and African-Americans. Neoliberal public policies began to reverse the postwar political economy in the 1980s, gradually hollowing out the manufacturing sector that buoyed the middle class.

From Saks and Bloomies straight to Goodwill: goodbye to the American middle class

Accordingly, the retail marketplace has gone soft in the middle. Shopping malls that cater to the affluent are also thriving. Anchored by upscale retailers like Saks Fifth Avenue, Neiman Marcus or Bloomingdale’s, Class A shopping malls — as they are called by Wall Street fund managers — are driving up the stock price for high-end mall operators such as Simon Property Group.

Class A malls, like California’s Stanford Shopping Center in Palo Alto and the King of Prussia mall in suburban Philadelphia, are also the only shopping hubs able to attract an Apple store, which can generate annual sales as high as $5,000 a square foot, more than any other U.S. retailer. That, in turn,  bolsters sales revenue for other mall retailers, a market analyst told Money magazine.

The result of this two-tiered retail experience is that while a Class B mall like Washington Square Mall in Indianapolis has cut rents per month for the average storefront from $1,200 a decade ago to as low as $400 today, the Simon property group has been able to post rent increases of 18.9 percent for new leases over a 12-month period in 2016 and 2017.

Meanwhile, the Goodwill store on East Washington in Indianapolis continues to pack ‘em in, particularly for its half-off sales on the first Saturday of every month, when you can fetch a pair of designer jeans for five bucks, or a Joseph Abboud suit for as little as $30.

Said Sam Perry, a spokesman for the Indiana Goodwill: “It’s like Black Friday on steroids.”