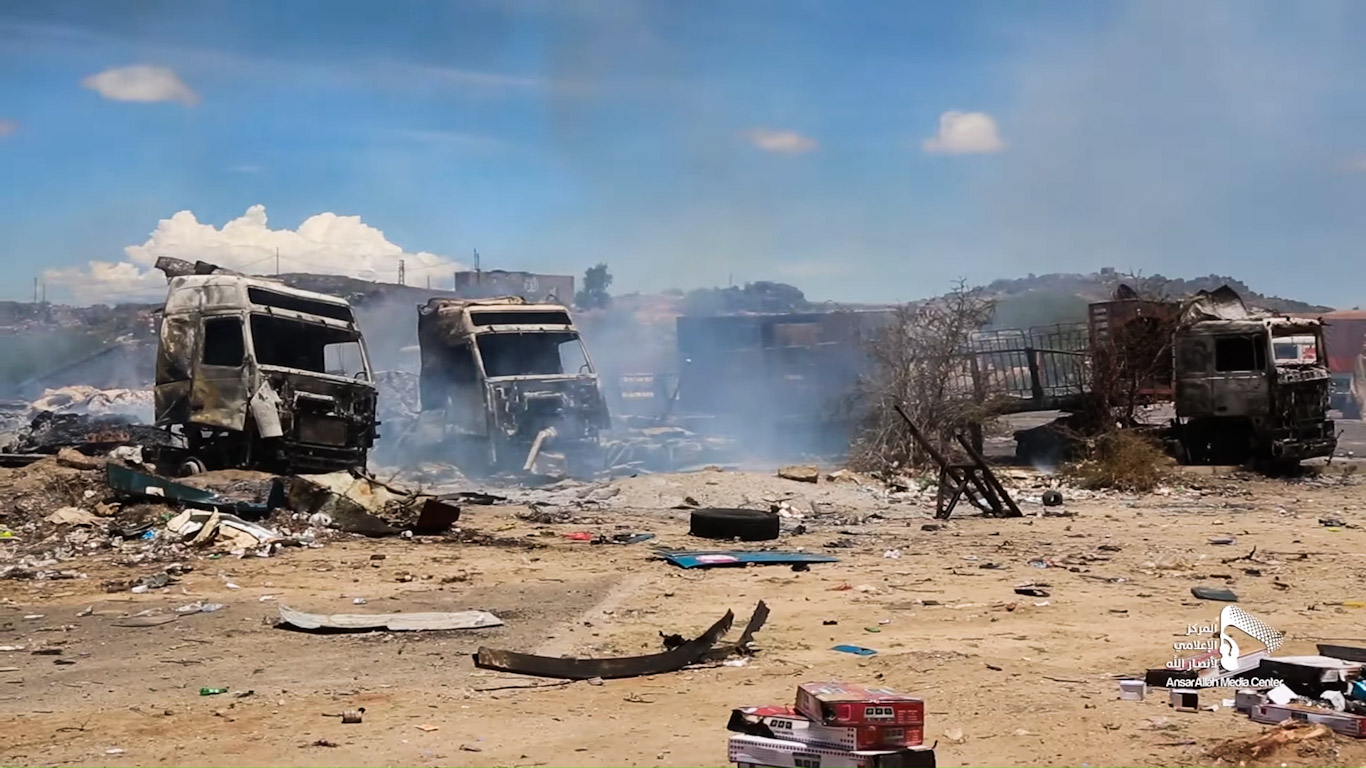 AL-BAYDA, YEMEN — Despite calls by the United Nations Secretary General, the Security Council and the World Health Organization to stop its war on Yemen amid the COVID-19 pandemic, the Saudi-led coalition has been intentionally targeting food and drug supplies in the country.

On Wednesday, at least 12 trucks loaded with food and medicine and other basic commodities went up in flames when Saudi warplanes struck them as they awaited passage through a customs checkpoint at the Afar Port in Al-Bayda. Multiple drivers, including foreign nationals, were killed or injured in the attack and others are still missing.

The Afar crossing was recently established in the central province of al-Bayda as a major point of entry for food and medicine in light of the continued siege on the port of Hodeida and Sana’a International Airport. The attack comes amid a number of Saudi-Coalition attacks on food and medicine supplies in Yemen.

On Thursday, at least six civilians, including a child, were killed and others injured when Saudi warships targeted a food storage facility in the al-Jurr area in the Abbs District in the country’s northwestern province of Hajjah.

On April 8, Saudi Arabia claimed it was halting military attacks and suspending hostilities in support of United Nations’ peace efforts and to avoid further spread of the new coronavirus in Yemen, however, the onslaught continues. The Coalition has carried out 76 offensives, over 810 airstrikes since April, according to the Yemen Army. Just last month, a Saudi airstrike killed 31 civilians, 19 of them children, and injured another 18 children in al-Jawf. “It was an attack on a civilian-populated area where children were in the vicinity,” UNICEF reported.

Following the uptick in attacks on Yemeni ports and other vital facilities, Yemen’s health minister held a presser in Sana’a, accusing Saudi Arabia of deliberately attempting to spread the COVID-19 pandemic.

Medical authorities in Sana’a’ reported their first case of the novel coronavirus, a Somali national who had underlying liver and kidney problems and was found dead in their Sana’a hotel. The health minister, Taha al-Mutawakkil, said, “We received a report about a situation in a hotel in the capital Sana’a on Sunday and epidemiological investigation teams went there immediately, where the affected person had died.

As a result of the ongoing blockade, particularly on medical devices, the coronavirus is suspected to have already spread undetected across much of the country, with testing virtually nonexistent. Moreover, 70 percent of all medical facilities in the country are not functioning and are poorly positioned to treat victims of the respiratory virus, let alone to protect healthcare workers.

According to the UN, most Yemeni healthcare workers have not been paid, or have been paid irregularly, for over two years, it added that equipment and medical supplies are insufficient or obsolete.

The attacks on food and medicine trucks come as Yemen grapples with funding cuts from international aid organizations according to the Aid Chief of the World Health Organization (WHO), who said that nutrition programs will also be cut and 80 percent of health services provided through U.N.-funded programs could also stop.

The WHO also said that there are currently 260,000 severely malnourished children and 2 million others that will be affected by moderate malnutrition. “These children’s immune systems will be weakened, making them much more vulnerable to COVID-19 and other diseases,” said Mark Lowcock, the UN’s Under-Secretary-General and Emergency Relief Coordinator. Lowcock has called for nearly $60 million to urgently protect the health and safety of women and girls in Yemen, where figures show that every two hours a woman loses her life during labor.

On Monday, the UN warned that a shocking 16 million Yemenis are at risk of contracting the coronavirus, dealing a whopping blow to what it has already described as the world’s worst humanitarian crisis. The “most likely scenario would see COVID-19 strike 55 percent of Yemen’s entire population, the global body’s aid chief, Lise Grande said. The United Nations Population Fund (UNFPA) said $24 million was also needed for the COVID-19 response to protect health workers and help women and girls gain access to reproductive health services.

This pandemic has proven a formidable foe for the health-care systems of advanced, stable countries like those in Europea, but to Yemen, which is suffering from five years of the war and an ongoing Saudi blockade, COVID-19 could result in an unprecedented death toll reminiscent of that that the Spanish flu pandemic of 1918 wrought upon much of the world.

A death toll reminiscent of the Spanish flu

The UN said in a statement on Wednesday that the dire humanitarian situation for Yemeni women would deteriorate even further as the COVID-19 pandemic enters the war-torn country. According to the international agency, more than 48,000 Yemeni women could lose their lives from complications of pregnancy and childbirth in the impoverished country due to critical funding shortages and the possible shutting down of reproductive health facilities.

According to the United Nations Population Fund (UNFPA), nearly half of all health facilities in Yemen are not functioning or only partially functioning, and “only 20 percent of health facilities provide maternal and child health services due to staff shortages, lack of supplies, inability to meet operational costs, or damage due to the war.”

The organization also said that “if such facilities shut down, an estimated 320,000 pregnant women would lose services from reproductive health centers and over 48,000 women could lose their lives of emergency obstetric complications in Yemen.

The best preventive measure to control the spread of the COVID-19 has so far been the practice of good hygiene, but the Saudi war and blockade have mired much of the country in filth as chemicals used to sanitize the water supply sit idle for a lack of fuel thanks to the blockade. In fact, the ongoing Saudi blockade has deprived Yemenis of the opportunity to reap the benefit of the sharp decline in crude oil prices.

Saudi Arabia has prevented 18 tankers, carrying more than 450 thousand tons of gasoline, from reaching electric stations and hospitals, despite carrying international permits, according to a statement by the Yemeni Oil Company.

Meanwhile, trucks carrying canned food and medicine en route to the besieged residents of al-Durayhimi have remained in Musai village for two weeks, unable to proceed thanks to the seemingly endless barrage of coalition rocket and artillery attacks, making it difficult to smuggle even to medical aid into the district.

The heavily populated area of al-Durayhimi lies nearly 20 kilometers from the Red Sea port city of Hodeida. The civilians there endure an acute shortage of food and medicine with no corridors for aid amid daily rocket and artillery strikes on the district by Saudi forces. The district has been blockaded by Saudi-led Coalition since June 2018.

Feature photo | A screenshot from video released by the Ansarallah Media Center shows civilian trucks that were targeted in a Wednesday airstrike by the Saudi-led Coalition at the Afar Port in Al-Bayda, Yemen.