Correlation Not Causation: the Link Between Terrorism and Islam

Since time immemorial, it has been an article of faith of every Muslim that suicide is ‘Haram’ (prohibited) in Islam. There is a well-known Islamic precept that whoever commits suicide will go straight to hell. But the Takfirists (those who declare others as heretics) have invented a new interpretation of Islam in which suicide is glorified as ‘martyrdom’ and suicide bombing is employed as a weapon to cause widespread fear.

Historically, suicide bombing as a weapon of war was invented by the Tamil Tigers during the eighties in their war against the Sri Lankan armed forces. The Tamils are a Hindu ethnic group of northern Sri Lanka who were marginalized by the Buddhist majority and they led a civil war in the country from 1976 until they were defeated by the Sri Lankan armed forces’ Northern Offensive in 2009.

Among the Muslims, suicide bombing as a tactical weapon was first adopted by the Islamic Jihad in the Israel-Palestine conflict during the Second Intifada that lasted from 2000 to 2005. Then the transnational terrorists of al-Qaeda adopted suicide bombing as a weapon of choice in some of their audacious terror attacks in the US and Europe. And after that, all the regional militant groups – including the Taliban in Afghanistan, al-Shabab in Somalia, Boko Haram in Nigeria and the Islamic State in Iraq and Syria – have also adopted suicide bombing as a tactical weapon in their rebellions against regional adversaries.

The phenomena of militancy and insurgency anywhere in the world has less to do with religious extremism and more with the weak writ of the state in remote rural and tribal areas of the Third World’s impoverished countries, which is sometimes further exacerbated by the deliberate arming of certain militant groups by regional and global players.

The Afghan jihadists of today, for instance, are a legacy of the Cold War when they were trained and armed by the CIA against the former Soviet Union with the help of Pakistan’s security agencies and the Gulf’s petrodollars. Similarly, the Islamic State’s militants in Syria and Iraq are a product of Washington’s proxy war in Syria in which Sunni militants were trained and armed in the border regions of Turkey and Jordan to battle the Shia-led government in Syria in order to contain the Shia resistance comprised of Iran, Syria and their Lebanon-based proxy, Hezbollah, which constituted a threat to Israel’s regional security. Ronald Reagan meeting in the White House with leaders of the Afghan mujahideen, which would later morph into al-Qaeda, March, 1985.

In order to empirically prove the point that militancy anywhere in the world has less to do with the professed ideology or religion of militants and more with geopolitical factors, here is a brief list of some of the recent non-Muslim insurgencies around the world:

First, as I have already described, the Tamil Tigers of Sri Lanka who invented suicide bombing as a tactic of war were Hindus.

Second, the Naxalite-Maoist insurgency in India’s north-east that has been raging since 1967 and has claimed tens of thousands of lives has been comprised of Hindus.

Third, the insurgency of the FARC rebels in Colombia that lasted from 1964 to 2017 and claimed hundreds of thousands of lives was a conflict among the Christians.

Fourth, the Northern Ireland conflict that lasted from 1968 to 1998 and claimed thousands of casualties was a dispute between the Protestants and the Catholics.

Sixth, the Nuer rebellion led by Riek Machar against his former ally President Salva Kiir’s Dinka tribal group since December 2013 in South Sudan which has claimed tens of thousands of lives has been a conflict among the Christians.

Seventh, the Hutu-Tutsi conflict that led to the Rwandan genocide in 1994 and claimed hundreds of thousands of lives was also a conflict among the Christians.

And last, all the belligerents of the Second Congo War that lasted from 1998 to 2003 and claimed millions of fatalities were non-Muslims.

Keeping all this empirical evidence in mind, it becomes amply clear that Islam as a religion is just as peaceful or ‘violent’ as Christianity, Hinduism and Buddhism; and taking a cursory look at the list, it also becomes obvious that the common denominator among all these disparate insurgencies has not been religion.

Since most of these insurgencies have affected the impoverished and underdeveloped regions of Asia, Africa and Latin America, thus the only legitimate conclusion that can be drawn from this fact is that militarization and weak writ of impoverished, developing states have primarily been responsible for breeding an assortment of militant groups in their remote rural and tribal hinterlands. That’s the only common denominator among this otherwise unrelated lists of insurgencies.

The root factors that have mainly been responsible for spawning militancy and terrorism anywhere in the world are not religion or ideology of militants but socio-economic, ethnic diversity, marginalization of disenfranchised ethnolinguistic and ethnoreligious groups and the ensuing conflicts; socio-cultural backwardness of the affected regions, and the weak central control of the impoverished developing states over their territory, which is often exacerbated by deliberate training and arming of certain militant groups that were used at some point of time in history as proxies by their regional and global patrons. 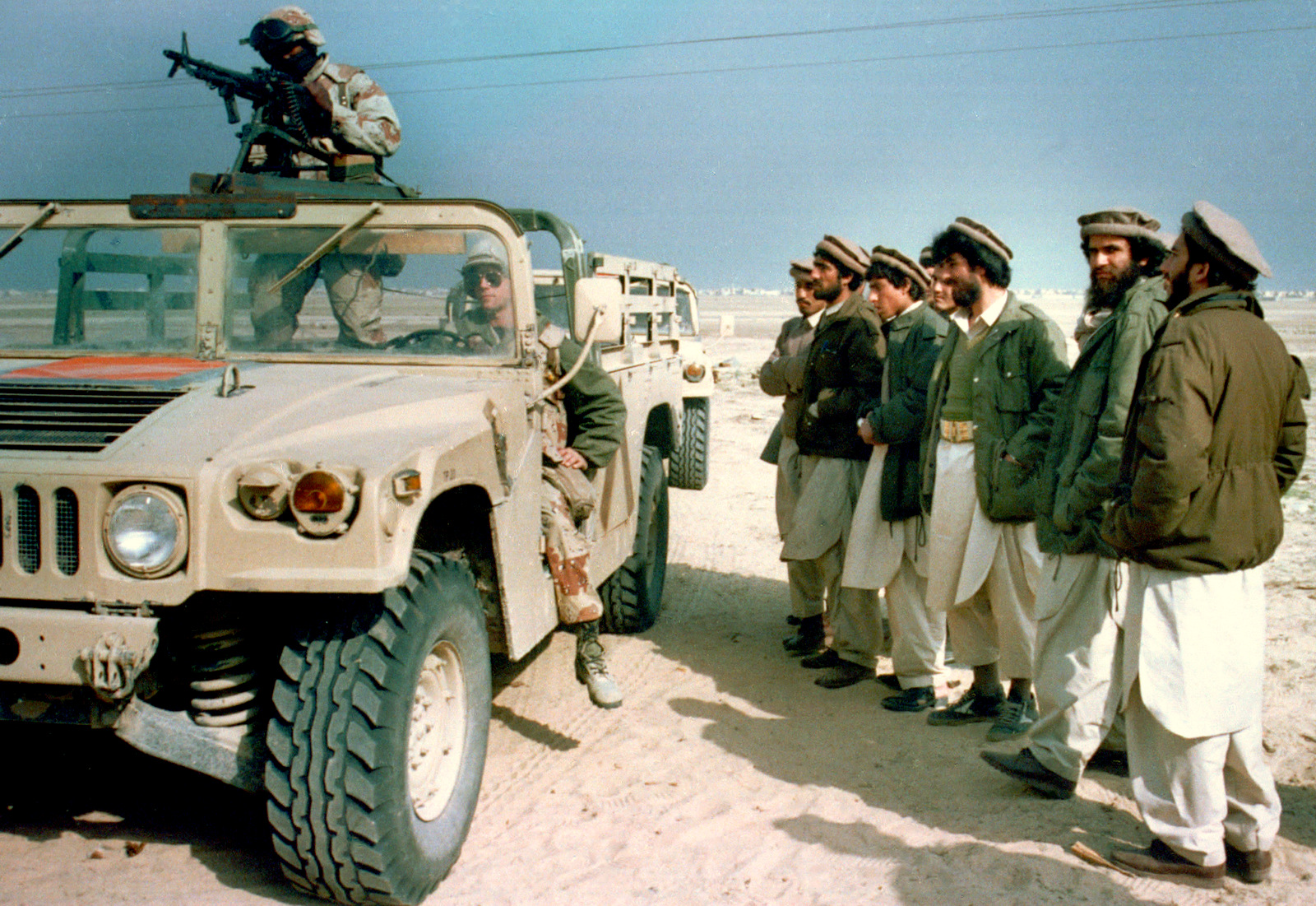 A group of Afghan mujahedeen guerrillas, look over a U.S. Marine humvee in eastern Saudi Arabia, Feb. 11, 1991. The Marines visited a camp consisting of about 300 mujahedeen who had been asked by the Saudi government to help fight against Iraq in the Gulf War. (AP/Department of Defense)

After invading and occupying Afghanistan and Iraq and when Washington’s ‘nation-building’ projects failed in those hapless countries, the US policymakers immediately realized that they were facing large-scale and popularly-rooted insurgencies against foreign occupation; consequently, the occupying military altered its CT (counter-terrorism) approach in the favor of a COIN (counter-insurgency) strategy. A COIN strategy is essentially different from a CT approach and it also involves dialogue, negotiations and political settlements, alongside the coercive tactics of law enforcement and military and paramilitary operations on a limited scale.

Finally, excluding large-scale insurgencies, even if we take a cursory look at some individual acts of terrorism, the Virginia Tech shooting in April 2007 that claimed 32 lives was perpetrated by a South Korean Seung-Hui Cho, then a Norwegian far-right terrorist Anders Behring Breivik shot dead 77 students on the island of Utoya, Norway, in July 2011, after that, Adam Lanza carried out the Sandy Hook Elementary Schools massacre in December 2012 by killing 27 people including 20 children, and more recently, Stephen Paddock committed one of the worst mass shootings in the US history by killing 58 people in cold blood at the Las Vegas Strip in October.

Top Photo | Rayan Toliver of Arlington, Texas, holds a sign that reads “We Believe In Peace & Love”, as Toliver joined other supporters for an Islamic conference against hate and terror at the Curtis Culwell Center, Jan. 17, 2015, in Garland, Texas. (AP Photo)

Nauman Sadiq is an Islamabad-based attorney, columnist and geopolitical analyst focused on the politics of Af-Pak and Middle East regions, neocolonialism and petro-imperialism.  He blogs at Petroimperialism.