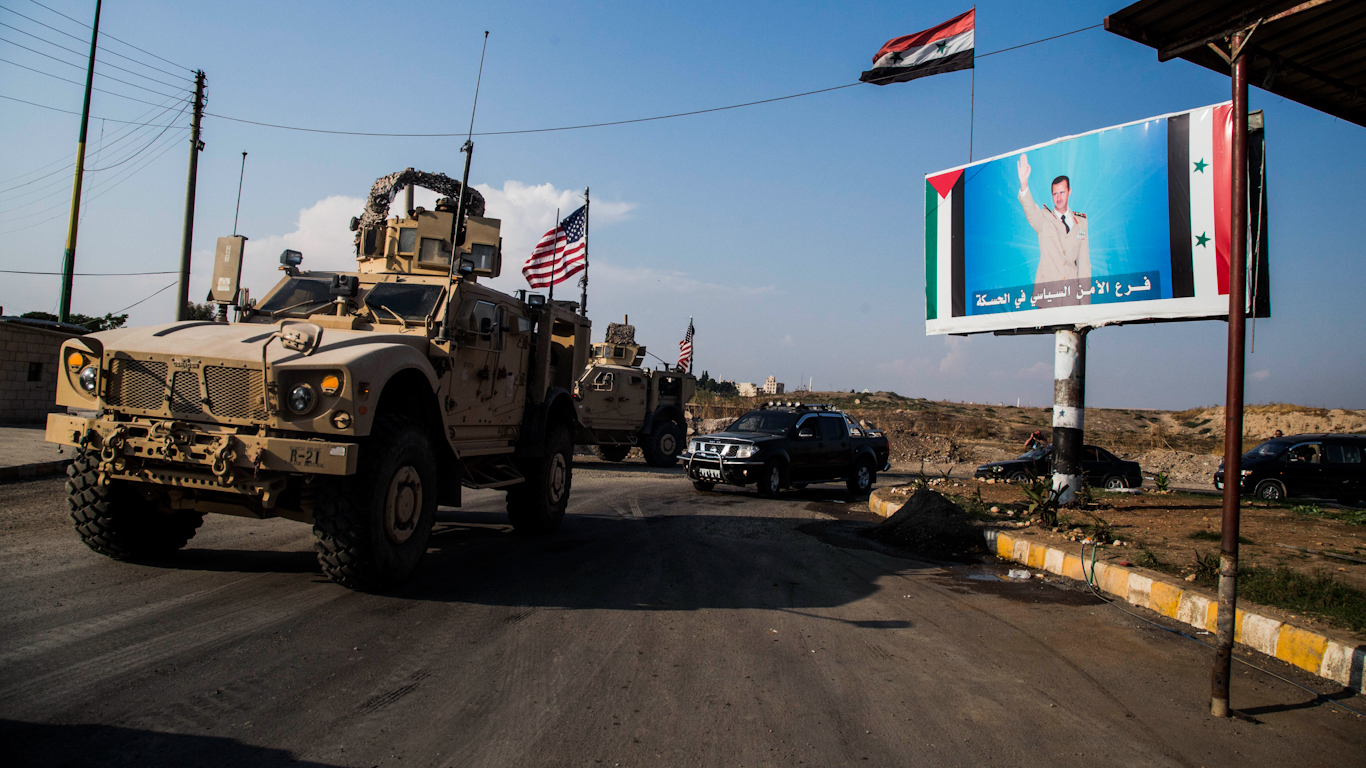 Near the end of July, one of the most important recent developments in U.S. foreign policy was quietly disclosed during a U.S. Senate hearing. Not surprisingly, hardly anybody talked about it and most are still completely unaware that it happened.

Answering questions from Senator Lindsey Graham, Secretary of State Pompeo confirmed that the State Department had awarded an American company, Delta Crescent Energy, with a contract to begin extracting oil in northeast Syria. The area is nominally controlled by the Kurds, yet their military force, the Syrian Democratic Forces (SDF), was formed under U.S. auspices and relies on an American military presence to secure its territory. That military presence will now be charged with protecting an American firm from the government of the country that it is operating within.

Pompeo confirmed that the plans for implanting the firm into the U.S.-held territory are “now in implementation” and that they could potentially be “very powerful.” This is quite a momentous event given its nature as a blatant example of neocolonial extraction, or, as Stephen Kinzer puts it writing for the Boston Globe, “This is a vivid throwback to earlier imperial eras, when conquerors felt free to loot the resources of any territory they could capture and subdue.”

Indeed, the history of how the U.S. came to be in a position to “capture and subdue” these resources is a sordid, yet informative tale that by itself arguably even rivals other such colonial adventures.

To capture and subdue

When a legitimate protest movement developed organically in Syria in early 2011, the U.S. saw an opportunity to destabilize, and potentially overthrow, the government of a country that had long pushed back against its efforts for greater control in the region.

Syria had maintained itself outside of the orbit of U.S. influence and had frustratingly prevented American corporations from penetrating its economy to access its markets and resources.

As the foremost academic expert on Middle East affairs, Christopher Davidson, wrote in his seminal work, “Shadow Wars, The Secret Struggle for the Middle East,” discussing both Syria and Libya’s strategic importance, “the fact remained that these two regimes, sitting astride vast natural resources and in command of key ports, rivers, and borders, were still significant obstacles that had long frustrated the ambitions of Western governments and their constituent corporations to gain greater access.”

“With Syria,” Davidson wrote, “having long proven antagonistic to Western interests… a golden opportunity had presented itself in 2011 to oust [this] administration once and for all under the pretext of humanitarian and even democratic causes.”

US Senators John McCain and Joseph Lieberman meet with Syrians at the Yayladagi camp on the Turkish-Syrian border. April 10, 2012. Umit Bektas | Reuters

The U.S., therefore, began organizing and overseeing a militarization of the uprising early on, and soon co-opted the movement along with allied states Turkey, Jordan, Saudi Arabia, the UAE, and Qatar. Writing at the end of 2011, Columbia University’s Joseph Massad explained how there was no longer any doubt that “the Syrian popular struggle for democracy [has] already been hijacked,” given that “the Arab League and imperial powers have taken over and assumed the leadership of their struggle.”

Soon, through the sponsoring of extremist elements, the insurgency was dominated by Salafists of the al-Qaeda variety.

According to the DIA and the Joint Chiefs of Staff, by 2013 “there was no viable ‘moderate’ opposition to Assad” and “the U.S. was arming extremists.” Investigative journalist Seymour Hersh revealed that “although many in the American intelligence community were aware that the Syrian opposition was dominated by extremists,” still “the CIA-sponsored weapons kept coming.”

When ISIS split off from al-Qaeda and formed its own Caliphate, the U.S. continued pumping money and weapons into the insurgency, even though it was known that this aid was going into the hands of ISIS and other jihadists. U.S. allies directly supported ISIS.

U.S. officials admitted that they saw the rise of ISIS as a beneficial development that could help pressure Syrian President Bashar al-Assad to give in to America’s demands.

Leaked audio of then-Secretary of State John Kerry revealed that “we were watching… and we know that this [ISIS] was growing… We saw that Daesh was growing in strength, and we thought Assad was threatened. We thought, however, we could probably manage — that Assad would then negotiate.” As ISIS was bearing down on the capital city of Damascus, the U.S. was pressing Assad to step down to a U.S.-approved government.

Then, however, Russia intervened with its air force to prevent an ISIS takeover of the country and shifted the balance of forces against the jihadist group. ISIS’ viability as a tool to pressure the government was spent.

The arsonist and the firefighter

So, a new strategy was implemented: instead of allowing Russia and Syria to take back the territories that ISIS captured throughout the war, the U.S. would use the ISIS threat as an excuse to take those territories before they were able to. Like an arsonist who comes to put out the fire, the U.S. would now charge itself with the task of stamping out the Islamist scourge and thereby legitimize its own seizure of Syrian land. The U.S. partnered with the Kurdish militias who acted as their “boots on the ground” in this endeavor and supported them with airstrikes.

The strategy of how these areas were taken was very specific. It was designed primarily to allow ISIS to escape and redirect itself back into the fight against Syria and Russia. This was done through leaving “an escape route for militants” or through deals that were made where ISIS voluntarily agreed to cede its territory. The militants were then able to escape and go wreak havoc against America’s enemies in Syria.

Interestingly, in terms of the oil fields now being handed off to an American corporation, the U.S. barely even fought ISIS to gain control over them; ISIS simply handed them over.

Syria and Russia were quickly closing in on the then-ISIS controlled oilfields, so the U.S. oversaw a deal between the Kurds and ISIS to give up control of the city. According to veteran Middle East war correspondent Elijah Magnier, “U.S.-backed forces advanced in north-eastern areas under ISIS control, with little or no military engagement: ISIS pulled out from more than 28 villages and oil and gas fields east of the Euphrates River, surrendering these to the Kurdish-U.S. forces following an understanding these reached with the terrorist group.”

Sources quoted by the Syrian Observatory for Human Rights claimed that ISIS preferred seeing the fields in the hands of the U.S. and the Kurds rather than the Syrian government.

The rationale behind this occupation was best described by Syria expert Joshua Landis, who wrote that the areas of northern Syria under control of the Kurds are the U.S.’ “main instrument in gaining leverage” over the government. By “denying Damascus access to North Syria” and “controlling half of Syria’s energy resources” “the U.S. will be able to keep Syria poor and under-resources.” So, by “promoting Kurdish nationalism in Syria” the U.S. “hopes to deny Iran and Russia the fruits of their victory,” while “keeping Damascus weak and divided,” this serving “no purpose other than to stop trade” and to “beggar Assad and keep Syria divided, weak and poor.”

Or, in the words of Jim Jeffrey, the Trump administrations special representative for Syria who is charged with overseeing U.S. policy, the intent is to “make life as miserable as possible for that flopping cadaver of a regime and let the Russians and Iranians, who made this mess, get out of it.”

This is the history by which an American firm was able to secure a contract to extract oil in Syria. And while the actual resources gained will not be of much value (Syria has only 0.1% of the world’s oil reserves), the presence of an American company will likely serve as a justification to maintain a U.S. military presence in the region. “It is a fiendishly clever maneuver aimed at anchoring American troops in Syria for a long time,” Stephen Kinzer explains, one that will aid the policymakers who hold “the view that the United States must remain militarily dominant in the Middle East.”

This analysis corroborates the extensive scholarship of people like Mason Gaffney, professor of economics emeritus at the University of California, who, writing in the American Journal of Economics and Sociology, sums up his thesis that throughout its history “U.S. military spending has been largely devoted to protecting the overseas assets of multinational corporations that are based in the United States… The U.S. military provides its services by supporting compliant political leaders in developing countries and by punishing or deposing regimes that threaten the interests of U.S.-based corporations.”

In essence, by protecting this “global ‘sprawl’ of extractive companies” the U.S. Department of Defense “provides a giant subsidy to companies operating overseas,” one that is paid for by the taxpayer, not the corporate beneficiaries. It is hard to estimate the exact amount of money the U.S. has invested into the Syria effort, though it likely is near the trillion dollar figure. The U.S. taxpayer doesn’t get anything out of that, but companies that are awarded oil contracts do.

What is perhaps most important about this lesson however is that this is just a singular example of a common occurrence that happens all over the world. A primary function of U.S. foreign policy is to “make the world safe for American businesses,” and the upwards of a thousand military bases the U.S. has stationed across the globe are set up to help protect those corporate investments. While this history is unique to Syria, similar kinds of histories are responsible for U.S. corporation’s extractive activities in other global arenas.

So, next time you see headlines about Exxon being in some kind of legal dispute with, say, Venezuela, ask yourself how was it that those companies became involved with the resources of that part of the world? More often than not, the answer will be similar to how this U.S. company got involved in Syria.

Given all of this, it perhaps might seem to be too mild of a critique to simply say that this Syria enterprise harkens back to older imperial eras where conquerors simply took what they wished: the sophistication of colonialism has indeed improved by leaps and bounds since then.

Steven Chovanec is an independent journalist based in Chicago, IL. His writings have appeared in outlets such as The Hill, teleSUR, Truthout, MintPress News, Insurge-Intelligence, and others. Follow him on Twitter @stevechovanec