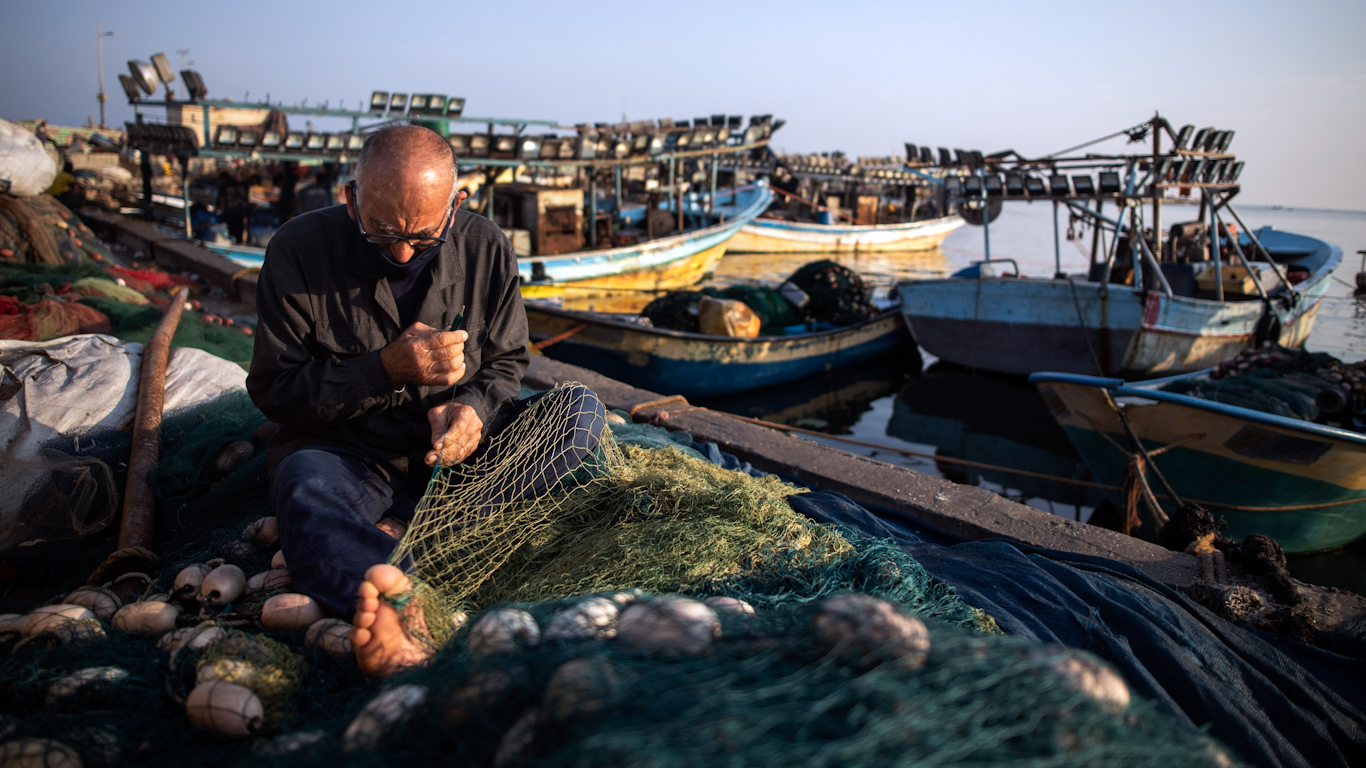 The Gaza Strip, just six miles wide, boasts a twenty-five-mile coastline on the Mediterranean Sea. Fishing is a natural industry in such a location and as recently as 2000, was a lucrative business for ten thousand Gazans. Today, only about 3,700 remain in the fishing trade – and about ninety-five percent of these live below the poverty line, with little hope of improvement.

On September 9, Israeli human rights watchdog B’Tselem released a report on the fishing industry in Gaza. It describes the plight-within-a-plight of Palestinians trying to eke out a living during a pandemic and under a hostile Israeli blockade. The report includes testimony given to B’Tselem field researcher Olfat al-Kurd by the wives and mothers of Gazan fishermen, including the story of Ahmad, whose twelve-hour workdays bring in under $150 a month.

How far is too far?

At this moment, Gazan fishermen are permitted by Israel to venture fifteen nautical miles off of Gaza’s coast to ply their trade. But the situation is “fluid,” and can change without warning – as it did on August 12 when Israeli military officials issued a directive that “immediately” reduced the fishing zone from fifteen miles to eight, the official reason given were the so-called incendiary balloons launched from Gaza into Israel. Four days later, the sea was completely off-limits to Gazans and remained that way for over two weeks.

Palestinian police pass an Israeli naval vessel as they search for the body of a fisherman killed by the Israeli Navy near Rafah.

One organization cataloged twenty changes in the fishing boundaries in 2019 alone – four of those were complete closures. At times, fishermen don’t know where the boundaries are until Israeli soldiers start shooting at them.

The Oslo Accords, an agreement signed by both Israel and the Palestinian leadership in 1993, places Gaza’s fishing perimeter at twenty miles offshore, only 10 percent of what some experts believe Palestine could claim as its Exclusive Economic Zone.

In the twenty-seven years since Oslo was signed, Israel has rarely allowed fishing beyond twelve nautical miles.

As the Israeli Navy patrols the sea surrounding Gaza, it is in daily breach of multiple international laws.

B’Tselem recounts an interview with Nura, whose family has had three fishing boats confiscated; ‘Ula’s family has lost two boats and four motors. The women disclosed that Israel frequently holds the boats for years; motors are often never seen again – a practice that violates international law. Over the years, hundreds of boats have been impounded.

The Israeli military also detains and imprisons fishermen for allegedly sailing outside of the boundaries they impose, as was the case in 2017 with Intesar’s son, Khader disappeared after embarking on a fishing trip. Ten days later, his family discovered that he’d been arrested and sentenced to sixteen months in an Israeli prison for fishing outside of the acceptable range “several times.” Last year, Khader would disappear again – this time he’d been shot in the head, and was located in an Israeli hospital.

Live fire in the absence of an immediate threat to human life is standard operating procedure for the Israeli military and is a breach of international law. Israeli human rights organization Gisha reported nearly one thousand such live-fire incidents at sea between 2010 and 2017, resulting in five deaths.

Zakaria Bakr, head of the Fishermen’s Union in Gaza, explains another Israeli policy that adds insult to injury: Israel’s blockade, now in its thirteenth year, “bans almost everything we need to maintain our boats,” including engines, spare parts, fiberglass, and rope. Fishing boats that escape confiscation and gunfire are still vulnerable, and half of Gaza’s registered fishermen are unable to go out because their boats are in disrepair.

The very presence of the Israeli military, controlling Palestinians, amounts to de facto occupation. While the Israeli government insists that it “disengaged” when Israel left Gaza, in reality, it is fully “engaged” – only now from outside the borders. Israel controls Gaza’s land boundaries and all exits, its airspace, and the sea, and administers all importing and exporting of goods.

Perhaps the most flagrant offense of all lies in Israel’s motive for harassing and disrupting fishermen. As Israeli leaders have made clear time and time again, the expanding and contracting fishing boundaries are an attempt to punish all of Gaza for the “transgression” of the few who dare to stand in defiance of Israeli oppression. In reality, international law recognizes the right of an occupied population to resist its occupier, including via armed resistance.

When, for example, militants release incendiary balloons or rockets, or when Palestinians in the West Bank “act out,” fishermen in Gaza (and their families and clients) pay for it. This is a form of collective punishment, a violation of the Fourth Geneva Convention.

The life of a fishing family, like most lives in Gaza, if often fixated on making ends meet. Nura Nu’man, a mother of two from a-Shati’ Refugee Camp whose husband Muamen is a fisherman, lamented to B’Tselem, “My life revolves around loans and debts.” The vast majority of fishermen live on less than $4.60 a day, forcing them to make tough choices, like whether to risk going out to sea during a sea closure or asking their children to drop out of school.

Even when there is a good catch, Gazans can’t afford to buy fish like they used to – especially during the coronavirus. If fish are left at the end of the day, constant power outages due to Israel’s blockade on the fuel needed to power generators make it impossible to keep them refrigerated for sale the next morning.

Then there is the emotional toll. Intesar, a mother of six from a-Shati’ Refugee Camp, described her young grandchildren’s make-believe fishing trip in which they warned each other to “watch out for gunfire”; ‘Ula’s children suffer from anxiety. No one wants the next generation to take up their fathers’ trade, but options are limited in the closed economy.

Israel has been censured by countless human rights groups and hundreds of United Nations reprimands over its human rights abuses of  Palestinians in Gaza. One troubling UN report warned that unless Israel changes its policies, Gaza would become “unlivable” by 2020. B’Tselem pointed out that “rather than change its policies…Israel has made them stricter and the situation has deteriorated,” adding that “Israel could change this stifling reality right now. Instead, it chooses to force Gaza residents to live in a state of poverty, stagnation, and hopelessness.”

The United States for its part continues to fund the Israeli government to the tune of $10 million a day in military aid and both houses of Congress remain obsessed with supporting and bankrolling Israel at every opportunity – although Americans as a whole are strongly in favor of conditioning such aid. The House has even managed to ignore a bill to protect Palestinian children from being tortured on the dime of American taxpayers.

When Gaza’s allies cry, “They have no fish,” Americans are responding, “let them eat cake.”