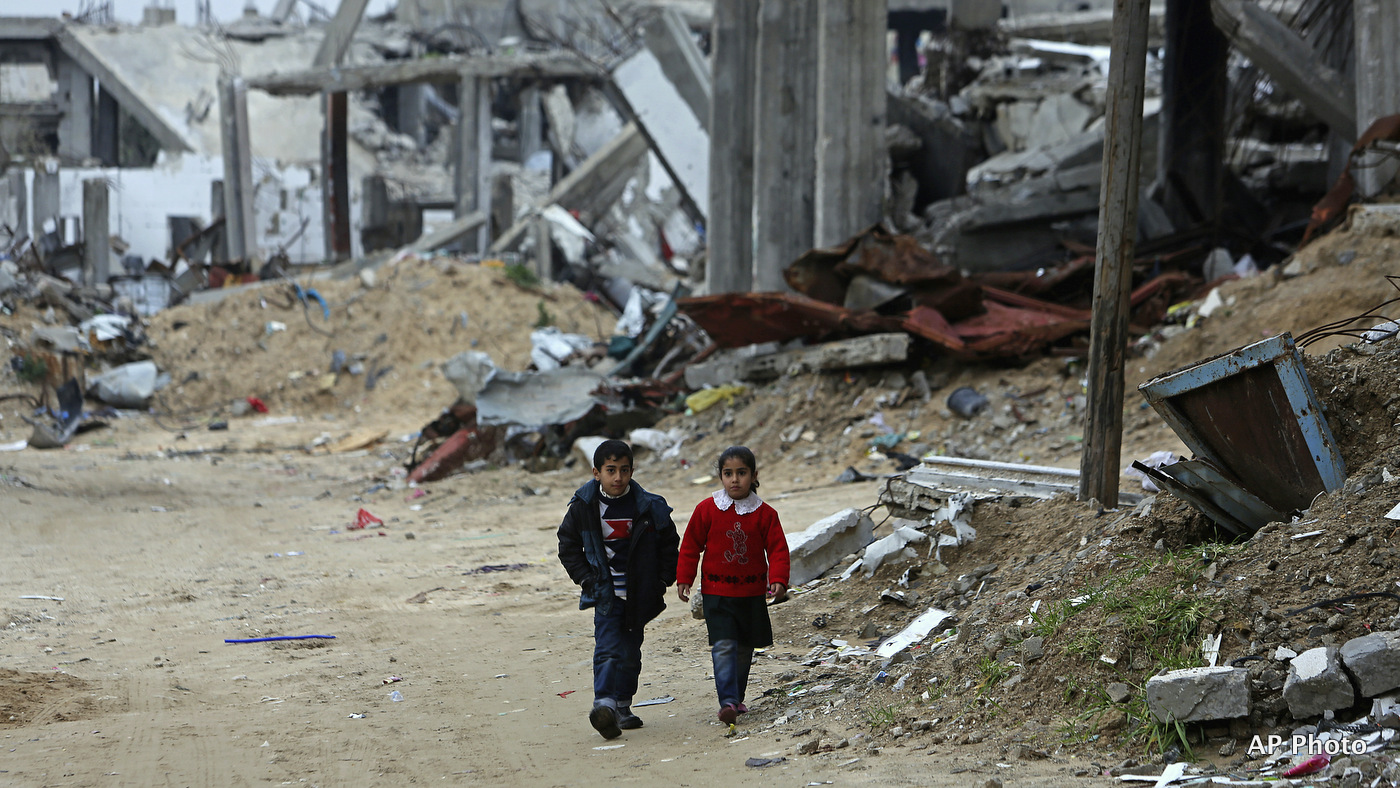 A Palestinian brother and sister walk in front of a building which was destroyed in Israel’s 2014 bombing of Gaza. (AP Photo)

NEW YORK — Weeks after a number of groups in the Movement for Black Lives sparked controversy by releasing a platform, A Vision for Black Lives, that accused Israel of “genocide” in its treatment of Palestinians, a legal briefing from the Center for Constitutional Rights bolsters their claim.

“While there has been recent criticism of those taking the position that Israel is committing genocide against Palestinians, there is a long history of human rights scholarship and legal analysis that supports the assertion,” the document, “The Genocide of the Palestinian People: An International Law and Human Rights Perspective,” reads.

Released on Aug. 25, a day before the two-year anniversary of the end of Israel’s 2014 offensive against the Palestinian Gaza Strip, the briefing distinguishes the “political, social, and legal meaning” of genocide before exploring its legal definition.

“The international community embraced the legal term ‘genocide’ in 1948 when the U.N. General Assembly adopted the Convention on the Prevention and Punishment of the Crime of Genocide, which then went into force in January of 1951,” Katherine Frank, Sulzbacher Professor of Law at Columbia Law School, told MintPress News.

Franke, director of Columbia Law School’s Center for Gender and Sexuality Law, faculty director of its Public Rights/Private Conscience Project, and chair of CCR’s board of directors, was the primary author of the legal analysis.

The document applies the convention to not only Israel’s repeated military operations against Palestinians in the Gaza Strip, but also Israel’s protracted occupation of Gaza and the West Bank (the effects of which it calls “incremental genocide”), Israel’s expulsion and killing of hundreds of thousands of Palestinians during its founding in 1948, and racist incitement against Palestinians by Israeli government officials.

“Persons that can be prosecuted for genocide include ‘constitutionally responsible rulers, public officials and private individuals,’ and according to the terms of the Genocide Convention they can be tried by the International Criminal Court, other international tribunals (such as the International Criminal Tribunal for Rwanda for Yugoslavia), [or] any court in the country or territory of which the act was committed,” Franke said.

“The crime of genocide is also understood according to customary international law to create universal jurisdiction, meaning that cases can be filed anywhere in the world, and are not limited to the territory where the conduct took place.”

While avoiding direct accusations, the briefing concludes that charges of genocide against Israel are hardly new in international legal circles:

“Prominent human rights advocates and scholars have argued that the killings of Palestinians and their forceful expulsion from mandate Palestine in 1948, the Israeli occupation of the West Bank, East Jerusalem, and Gaza, and the violence and discrimination directed at Palestinians by the Israeli government have violated a number of human rights protections contained in international human rights law, genocide being among them.”

‘Impunity over accountability and justice’ Another report, issued on Aug. 28 by Gaza’s Al Mezan Center for Human Rights and Adalah: The Legal Center for Arab Minority Rights in Israel, tracks 27 joint complaints filed by the two groups “involving suspicion of grave violations of international law” during the 2014 offensive.

In each case, “Gaza Two Years On: 27 Cases of Suspected War Crimes, 0 Indictments” alleges that not only has the Israeli government failed to issue indictments, but “Israel has not examined even a single case in accordance with the international standards of investigation: independence, impartiality, effectiveness, promptness and transparency.”

“The Israeli Military Advocate General (MAG) probes that are now underway into these cases are being conducted in a sluggish and convoluted manner that fails to meet these standards,” the document charges.

“We have engaged with the Israeli authorities positively and in good faith in the hope that they [would] investigate the complaints we have put on behalf of victims in Gaza adequately,” Mahmoud Abu Rahma, Al Mezan’s communication and international relations director, told MintPress.

“Unfortunately, the MAG chose impunity over accountability and justice, and has been closing dozens of cases without credible investigations.”

In 11 of the cases, which include bombings of residential buildings, children, five United Nations Relief and Works Agency (UNRWA) schools being used as shelters, mosques, hospitals, civilian infrastructure, and municipal workers, Israel failed to even open an investigation.

In another, the slaughter of four boys from the Bakr family as they played football on the Gaza beach, Israel closed its investigation on June 12, 2015, concluding that “the attack process in question accorded with Israeli domestic law and international law requirements.”

An appeal of the closure by Al Mezan and Adalah remains pending, as do nine other cases.

In six remaining complaints, Israeli agencies have not even responded to the groups.

“This leaves the victims without any hope of redress and kills any faith in the justice system in Israel,” Abu Rahma said.

“More dangerously, this pattern of entrenching impunity will only embolden the military to commit more atrocities and ignore the most basic principles of international law in relation to the protection of civilians.”

Asked about other avenues for redress, Abu Rahma replied:

“As domestic remedies are not made accessible to victims, international mechanisms, such as the [International Criminal Court], become the only viable option to ensure respect for human rights and protection for civilians in this 50-year-old occupation context.” Israel’s standing at the ICC, where it faces an ongoing investigation, came into stark relief last week, as hundreds protested a state visit by Israeli Prime Minister Benjamin Netanyahu to The Hague, the court’s seat as well as the capital of The Netherlands.

As crowds gathered outside chanted for his indictment, Netanyahu’s reception in the halls of power was at times no less frosty.

Tunahan Kuzu, a member of parliament from the anti-racist Denk (“Think”) party, refused to shake Netanyahu’s hand in a receiving line, pointing instead at a Palestinian flag pin on his lapel.

“While the streets of Gaza were reddened by blood that splashed out of the veins of children in the summer of 2014, the red carpet is rolled here,” Kuzu later posted on Facebook.

“We could have sent him straight away to the International Criminal Court,” he added. “That would have been better.”

“If it wasn’t because of his diplomatic immunity, he could have been arrested and brought to the ICC, instead of what happened,” Dutch activist Stefanie Eisgrou, a spokesperson for the solidarity groups cooperating in the protest, told MintPress.

“To invite him to the Hague, of all places, is just surreal to us.”