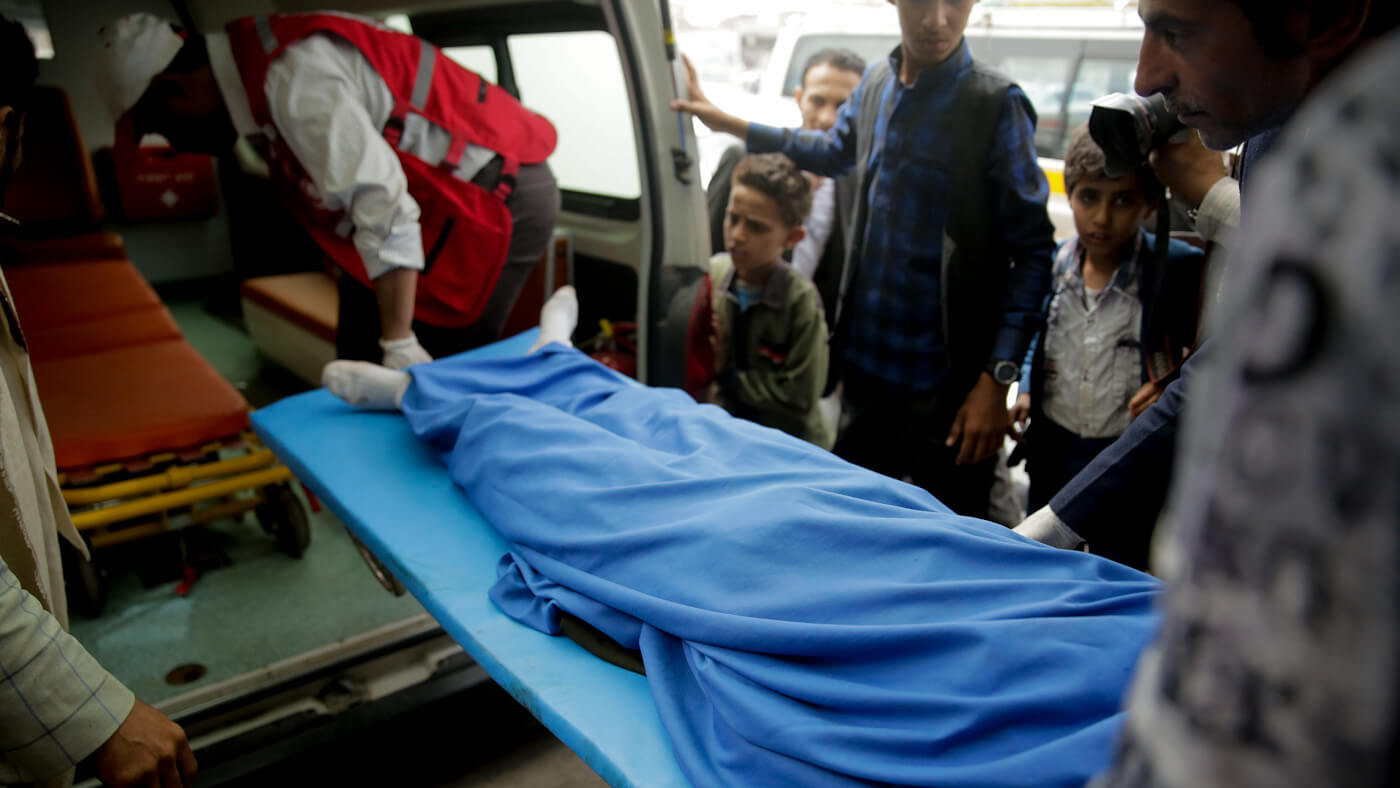 As House Votes US Out of Yemen, Saudis Bombs Leave Scores of Schoolchildren Dead

This latest attack came just two days after the U.S. House of Representatives approved a joint resolution invoking congressional authority under the War Powers Resolution to direct the president to end U.S. participation in the devastating Saudi-led war against Yemen.

SANA’A, YEMEN — In the densely populated area of Sa’wan northeast of Yemen’s capital city of Sana’a, a clouded sky framed the picturesque district as students, including Maha, listened to an announcement that, because of the fear of cholera spreading, their school would no longer be providing students with lunch. With the noon hour approaching, the picturesque sky would soon turn blood red as a Saudi aircraft bombarded the area with a barrage of airstrikes.

A few minutes later, a deafening explosion echoed throughout Sa’wan and, when the thick black smoke finally began to dissipate, chaos, moans and screams filled the grounds outside of the school. “Do not worry, you will be fine,” a paramedic assured the first casualty he stumbled upon. Her name was Maha Melhah Jar Allah, a fifth-grade girl who took her last breath as she was being transferred into an ambulance.

Maha was one of at least 14 schoolchildren who were killed, along with at least 104 injured, when Saudi airstrikes targeted a factory in close proximity to schools, homes, and shops in Sa’wan on Sunday morning.

“Everyone was hysterical, some were crying and shouting in panic,” said Fatehiya Kahlani, principal of Al-Ra’i. “The situation was horrible, as the school has 2,100 students.”  Al-Ra’i was badly damaged in the airstrike and many students and teachers were left with injuries from broken glass. The streets around the schools have been transformed into a hellish scene, as many homes and shops were partially destroyed in the attack.

Rashed Al-Haimi, a resident in the district who had two female family members injured in the airstrike, told MintPress:

We suddenly heard a fighter jet while we were on the street, we then heard the first strike. We remained calm. Then came the second strike and then the third, which was the strongest of them all.”

Youssef al-Hazari, a spokesman for the Yemeni Ministry of Public Health and Population told MintPress that at least 14 people lost their lives, including 13 schoolchildren, and 104 others sustained injuries, including 50 schoolchildren and 20 women. He added, “On World Health Day, April 7, which carries the slogan ‘Health for All,’ the Saudi-led Coalition of aggression marked the event in its well-known manner.”

A Yemeni schoolgirl who was injured in a Saudi attack receives treatment at a hospital in Sanaa, Yemen, April 7, 2019. Hani Mohammed | AP

The death toll is expected to rise, as many victims of the strike remain in critical condition and hospitals struggle to cope with a lack of medical supplies as a result of a Saudi Coalition-imposed siege that began in 2015. Al-Hazari confirmed to MintPress that additional fatalities are expected due to the number of victims that were seriously injured and a lack medical services, saying “many of the children sustained serious wounds and we do not have the means to save their lives.” He called on the international community to shoulder its responsibility for the crimes being committed by Saudi Arabia and its regional allies against the Yemeni people.

Inside Kuwait Hospital in Yemen’s capital Sana`a, screams of grief and pain filled the air. An elderly man frantically asks a crowd of rescuers to help him find his daughter. A father falls to the ground after learning that his daughter had been killed in the attack. Two girls lie in their torn, blood-stained school uniforms along with their school bags, fighting death in the same crowded room. “What is my daughter guilty of! Why would the warplanes kill her?” cried a mother in her 30s, tears flowing steadily from her face as she yelled and shook her daughter. “My daughter died when she was hungry.”

Students who survived the attack recounted their experience to MintPress. A 13-year-old girl who attended al-Ra`i told MintPress as she lay connected to a ventilator in Kuwait Hospital’s emergency unit:

We were in Quran class when we heard the sound of a plane and suddenly a big explosion hit us. … After that the scene became hellish as choking dust filled the air before paramedics came.”

“We were in the classroom when the first strike hit; we then fled and, when we reached the stairs, the second strike hit us,” 14-year old Ayiah Muhammad Yahya Taher, who attends Al-Ahqaf, recounted as she was receiving first aid. “Four kids from fourth and first grades died.”

Dr. Yahya El-Brehey — an emergency and intensive care specialist at United Hospital, the closest hospital to the schools where the attack took place — told MintPress:

At 12:00 clock, we received more than 27 victims, including mothers who sustained injuries from shrapnel. Most of the cases were schoolchildren. Three children were dead and 12 were in serious condition. Most of the children died as a result of burns and suffocation.”

The remaining cases were transferred to other hospitals including Ra`fha, al-Haramain, Saudi German and the Kuwait Hospital.

The attack led to the spread of the panic throughout Yemen`s families. Khadijah Ahmed, a mother of two schoolchildren told MintPress, “I live in horror; I can not let my children to go to school; the schools have become insecure for my children.” Coalition forces in Yemen have targeted schools that were still in use, according to Amnesty International, disrupting the education of more than a million children.

Moreover, approximately 900 schools have been destroyed, damaged by Coalition attacks since 2015, when the war began, according to a new statement made by the Legal Center for Rights and Development to MintPress.

Yemeni Health Minister Taha al-Mutawakel said the massacre points to the Saudi-led Coalition’s total disregard for international and humanitarian treaties and laws. Mutawakel reiterated that the failure of the international community to impose sanctions on the perpetrators of such crimes has emboldened them to continue targeting Yemeni people.

Initial boast, then silence and accusation

The Saudi Coalition boasted of bombing the densely populated area. Saudi state-run television, al Arabiya, announced that Saudi jets had bombed a military police site in the district of Sa’wan, killing dozens of the Coalition’s opponents. Later, the Coalition stopped reporting on the strikes and accused the Houthis of being behind the attacks, without providing any evidence to back their claims.

A screenshot of a tweet from al Arabiya boasting of the attack in Sa’wan.

The U.S.-backed, Saudi-led Coalition has disavowed attacks in Yemen many times before. On August 9, 2018 the Coalition initially denied its role in the attack on a school bus carrying children to summer camp on Dhahian’s outskirts in Yemen’s northwestern province of Sa`ada.  It later admitted targeting schoolchildren, claiming that an unnamed party had provided false intelligence.

The air attack committed by the U.S.-backed Coalition seems to be not the only way in killing Yemen`s schoolchildren. On Friday, two children were killed and eight critically wounded when an unexploded Saudi bomb went off at a school in Hamdan district in north Sana`a.

In the wake of the explosion of the bomb, a residue of a prior Saudi bombing campaign, UNICEF’s regional chief of communications Juliette Touma said:

It is highly likely, as we’ve seen in Syria, Iraq and elsewhere, that children will continue to be killed even when there’s a lull in violence or the violence comes to an end.”

Since 2015, international human-rights organizations have documented thousands of unlawful Coalition strikes, which have hit homes, markets, hospitals, schools, and mosques. Some of these attacks appear to amount to war crimes.

This attack on schools came just two days after the U.S. House of Representatives approved a joint resolution invoking congressional authority under the War Powers Resolution to direct the president to end U.S. participation in the devastating Saudi-led war against Yemen, raising questions about whether Saudi Arabia considered the move as somehow clearing the way for the kingdom to commit more crimes in Yemen.

Top photo | Yemenis carry the body of a girl who was killed in a Saudi airstrike near a school at a hospital in Sanaa, Yemen, April 7, 2019. Hani Mohammed | AP