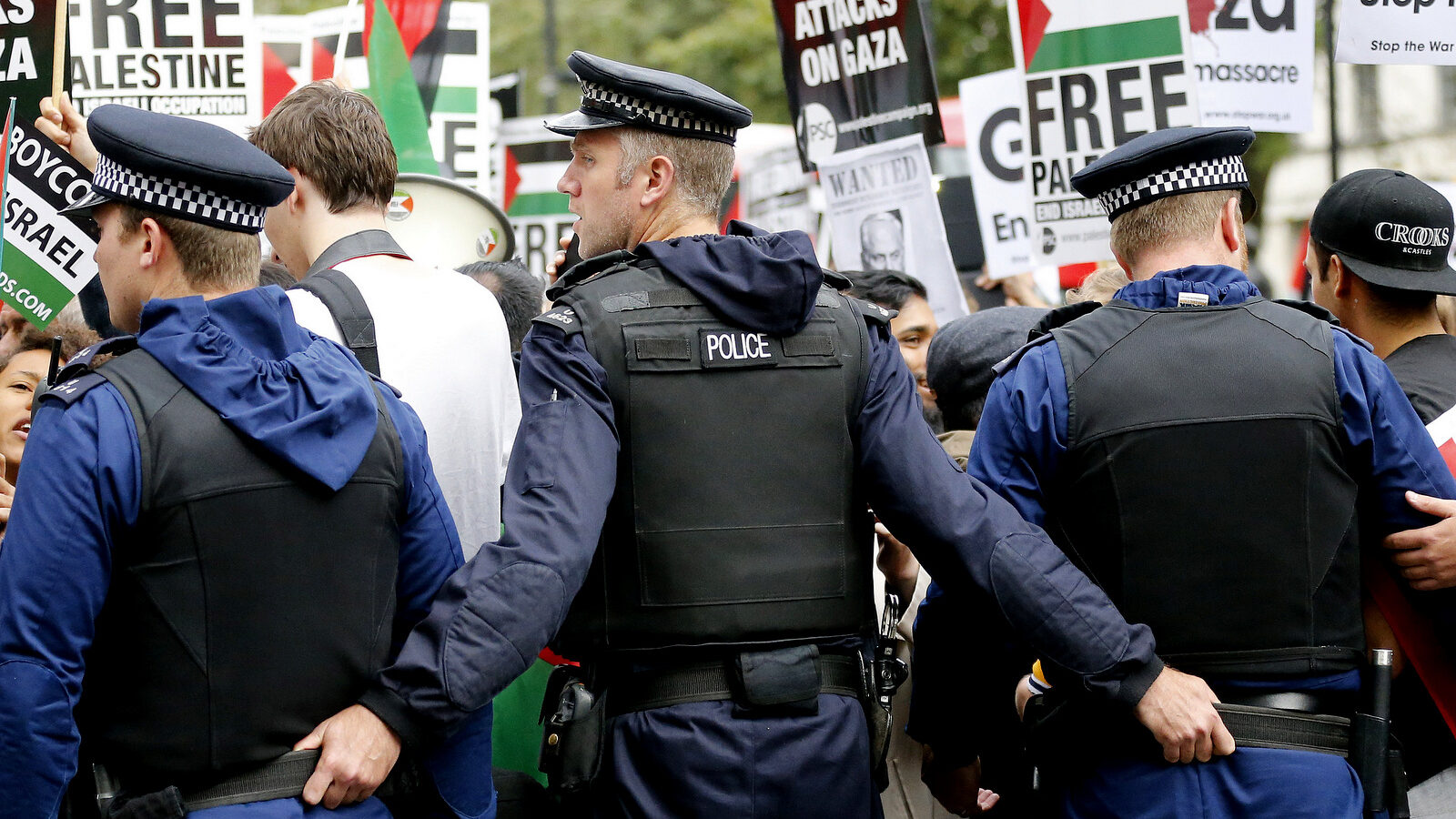 British police officers push back demonstrators during a protest against the visit of Israel’s Prime Minister Benjamin Netanyahu to Britain, in front of Downing Street in London, Wednesday, Sept. 9, 2015. (AP Photo/Frank Augstein)

United Kingdom — A U.K. festival is to host a theatre performance that invites audience members to adopt the identity of an undercover cop and infiltrate protests. Campaigners and activists are outraged by the show, accusing it of glorifying and trivialising the actual abuse of the British women who were deceived into forming relationships with undercover police officers.

The sinister real-life events not only showed the world of deception and duplicity the British police are capable of, but have gone on to inspire the bad-taste show as part of a summer festival. The world premiere of Operation Black Antler has been co-commissioned by the Brighton Festival and is due to run in the coastal city during May.

The festival website boasts a groundbreaking piece of immersive theatre by Blast Theory and Hydrocracker that will give people an “insightful and unforgettable walk in someone else’s shoes.” Many go to the theatre to lose themselves in the production and forget life and few mediums are better for this than immersive theatre — where instead of being passive bystanders, audience members play a role in the story.

For a mere £20, Operation Black Antler will give theatre goers the chance to immerse themselves as an abusive and deceptive state agent, the festival website states:

“Operation Black Antler is your chance to go undercover for the night. Visit the safe house to meet your police handler and build up your identity. Choose your cover story and meet the rest of the team. Then head out to the gig to use your new skills. Mingle with the crowd, keep your eyes peeled and gather vital information before it is too late.”

As the real-life victims of this state-sanctioned abuse attempt to put their lives back together, people will be paying to adopt the mindset of their abusers. What were they thinking?

What’s next — the opportunity to slip into role as a German soldier in a World War II concentration camp?

As usual, Twitter erupted with those demanding answers from the organisers, with some even calling for the show to be cancelled.

This @brightfest event charges £20 for you to pretend to be a psychologically & sexually abusive #spycops officer https://t.co/8GB39cCw3c

I'm all for artistic innovation but honestly @brightfest? This is a disgrace: Operation Black Antler https://t.co/xk85A9rFHe #spycops

@blasttheory will you be doing events where we can pretend to be a sexual grooming gang? How about playing at being Abu Ghraib torturers?

@blasttheory abusive undercover policing is not something to turn into a fun experience. Admit you got this one wrong and cancel.

Responding to the condemnation, Blast Theory took to Twitter:

“We hear the concerns raised about Operation Black Antler. The project in no way glorifies the police nor trivialises the experiences of the women at their hands. On reflection, some of the ways we have described the work do not fully reflect this and we will be updating.”