In the aftermath of President Donald Trump’s bellicose United Nations speech – where he threatened to “totally destroy” the 25 million inhabitants of North Korea – Trump’s own use of provocative and unprecedented language was largely ignored.

Most reports gave a scant and highly selective history of nuclear weapons testing in the Pacific Ocean. Reuters, for example, stated that the United States’ only test of an operational ballistic missile with a live warhead was fired from a submarine in the Pacific Ocean in 1962. Others made no mention of the previous nuclear weapons tests in the Pacific, or merely stated that the last above-ground test of a nuclear device was conducted by China in 1980 – suggesting to their readers that a potential test by North Korea would be among the first conducted in the Pacific.

In reality, the history of nuclear bomb testing in the Pacific is as long as it is tragic. Such tests in the region were conducted exclusively by the only country in the world to have used a nuclear bomb against another nation – the United States. A massive column of water rises from the sea as the second atom bomb test at Bikini Atoll explodes underwater July 25, 1946. Joint Task Force One | AP

After World War II, the United States acquired the Marshall Islands, a remote island chain in the Pacific, and soon developed big plans for their new prize.

One of the islands within the group, known as Bikini Atoll, was evacuated so that the U.S. could transform the island into a nuclear bomb test site. At the time, media coverage of the bomb tests was extensive, a major opportunity for the United States to showcase its military might and secure its place as a global “superpower.”

Little coverage, however, was given to the island’s nearly 200 native residents who were forced to relocate to other nearby islands, leaving them out of the blast zone but not out of harm’s way. Commonly referred to in the Western media at the time as “savages,” the native islanders were to become part of the U.S. government’s sordid legacy of human experimentation.

As nuclear bomb after nuclear bomb was detonated in the Marshall Islands – amounting to 23 tests of both fission and fusion (i.e., hydrogen) bombs over a 12-year period, per the official record – evacuated islanders and others nearby were intentionally exposed to radiation fallout from the testing, in what would become known as “Project 4.1.”

Officially titled “Study of Response of Human Beings Exposed to Significant Beta and Gamma Radiation due to Fall-out from High-Yield Weapons,” Project 4.1 saw the U.S. government intentionally fail to inform island residents of the impending bomb tests or their threat to exposure — despite the fact that the government was directly responsible for overseeing their well-being – in order to “conduct a scientific study of radiation injuries to human beings.” When the first bomb detonated, children played with the dust that fell from the sky, only to wake up with weeping lesions and their hair falling out days later. 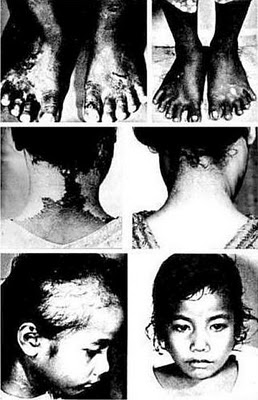 Photos show the results of radiation on a child taken before and after nuclear test Bravo on the Marshall Islands.

Dr. Robert Conard, head of the Brookhaven/AEC medical surveillance team for the islanders, wrote in his 1958 annual report on the exposed islanders that their suffering would afford:

the opportunity for a most valuable ecological radiation study on human beings … The various radionuclides present on the island can be traced from the soil through the food chain and into the human being.”

By 1974, almost a third of exposed islanders developed tumors while many of their children were born with developmental problems, stunted growth or worse. Thyroid cancer became – and still is – the norm. Still unable to return to their homes, which were rendered uninhabitable by the repeated blasts, the natives of the Marshall Islands have been crowded into slums that offer little to no medical treatment for the ills residents suffer due to decades of high radiation exposure. Adding insult to injury, much of their land has been overtaken by U.S. military bases.

Yet recent corporate media coverage of a potential North Korean nuclear test in the Pacific has apparently sought to re-write the history of U.S. nuclear testing in the Marshall Islands.  The Independent, for example, stated such tests were approved and conducted “before the risks to innocent people and the environment were well-understood,” an outright falsehood given declassified government documents stating the contrary.

The same pundits fear-mongering over the potential threat have stated that “damage to humans could be limited if North Korea picks a particularly isolated spot” to conduct the test. However, if North Korea chooses to pick a more dangerous location to detonate, the fact that the United States has done far worse in the past will certainly be swept under the rug. Such are the blinders that come standard-issue with “American exceptionalism.”