The study found that twice as many people are more likely to die in counties that receive an influx in military equipment.

Ferguson has been under Justice Department scrutiny since 18-year-old Michael Brown, who was black and unarmed, was fatally shot by white officer Darren Wilson 18 months ago FERGUSON, Mo. — The latest on efforts by Ferguson to reach a consent agreement with the U.S. Department of Justice to improve police and court practices in the St. Louis suburb (all times local): 4:20 p.m. The Justice Department has filed a civil rights lawsuit against the city of Ferguson, one day after the city council

END_OF_DOCUMENT_TOKEN_TO_BE_REPLACED

But, just 25 police officers have died from firearms-related violence in the same period. END_OF_DOCUMENT_TOKEN_TO_BE_REPLACED

A municipal court judge in Ferguson, Missouri, on Monday announced sweeping changes to the city's court system, including an order to withdraw all arrest warrants issued in the city before December 31, 2014. The announcement came ahead of a major new municipal

END_OF_DOCUMENT_TOKEN_TO_BE_REPLACED 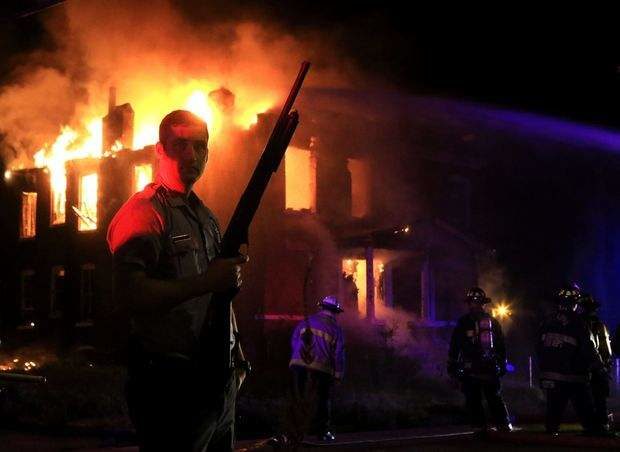 ST. LOUIS — Officers arrested at least nine people and deployed tear gas amid protests in St. Louis over the death of a black 18-year-old who was fatally shot by police after he pointed a gun at them, the city's police chief said. Chief Sam Dotson said at a news conference late Wednesday that a group of protesters who had

END_OF_DOCUMENT_TOKEN_TO_BE_REPLACED

FERGUSON (TFTP)  The Missouri chapter of the Oath Keepers are planning to hold an open carry march through downtown Ferguson, Mo., which will reportedly involve arming 50 black protestors with AR-15 rifles. The decision to hold the event transpired after St. Louis County officials, in violation of Missouri’s open carry law, insisted that members of the […] END_OF_DOCUMENT_TOKEN_TO_BE_REPLACED

Armed to teeth with semi-automatic assault rifles and handguns, members of the Oath Keepers militia, formed of former and current law enforcement. At least four members of the 'Oath Keepers' arrived in Ferguson on early Tuesday and began patrolling the West Florissant Avenue, walking through the crowds of protesters gathered there for a ‘day of civil disobedience’ following the anniversary of the killing of 18-year-old African-American Michael Brown, shot