Should Controversial Speakers Be Kept Off Campus? 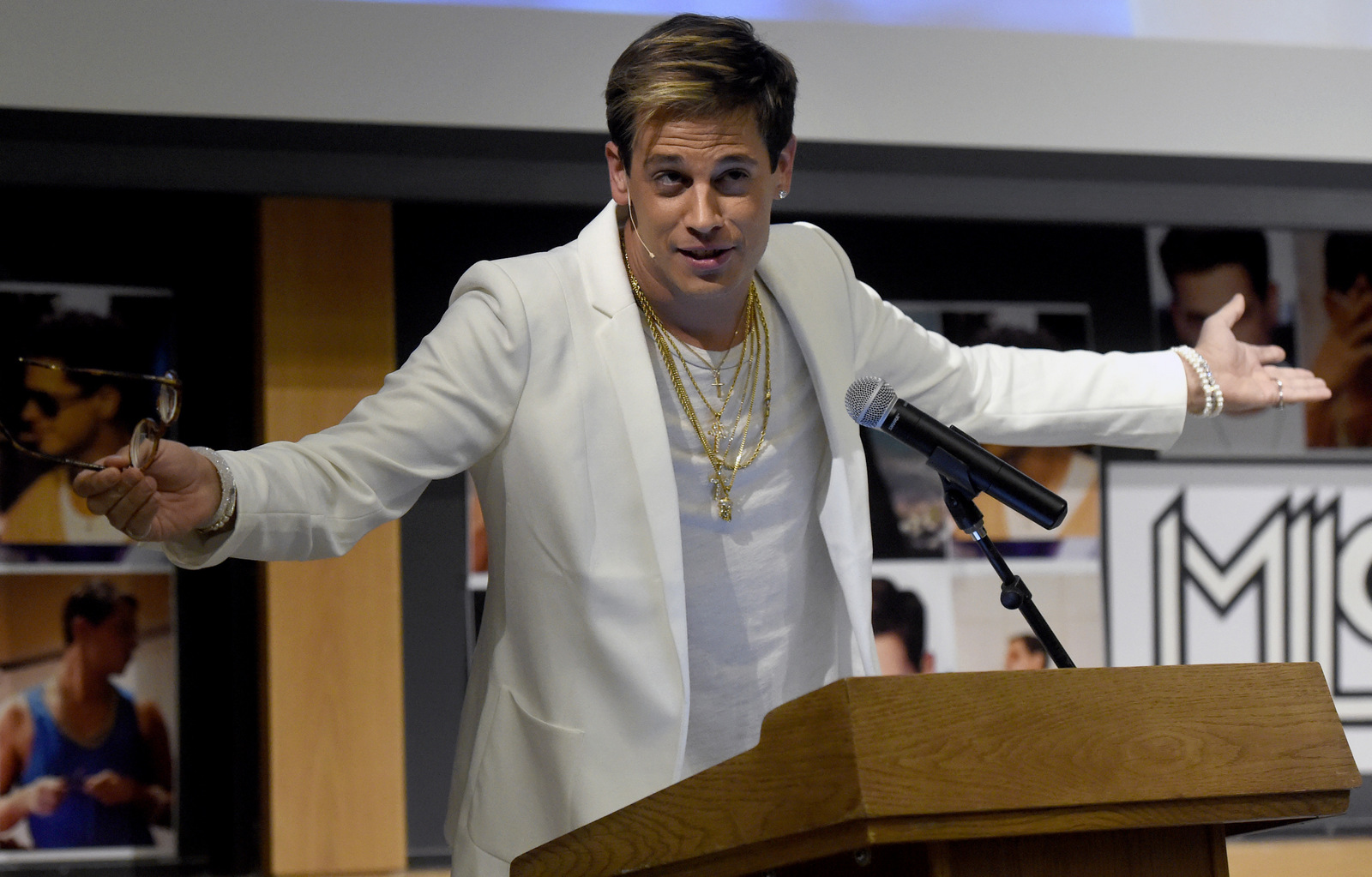 Milo Yiannopoulos speaks on campus in the Mathematics building at the University of Colorado in Boulder, Colo. (Jeremy Papasso/Daily Camera via AP)

Independent journalist Rania Khalek, who is a colleague and friend of mine, had her speaking event canceled at the University of North Carolina in February. She was disinvited by the Students for Justice in Palestine (SJP) chapter on campus because several activists and scholars in SJP chapters throughout the United States disagree with and despise Khalek’s views on the Syrian conflict.

The SJP chapter made a terrible mistake by disinviting Khalek and allowing a faction to “no-platform” her. However, this appears to be a prevailing trend on campuses throughout the United States. Whenever someone is scheduled to speak, who has views which are considered offensive or abhorrent to causes, there are mobilizations to have that individual’s speaking event canceled.

Cancellations or disinvitations amount to easily winnable victories. For example, the faction, which succeeded in coercing the SJP chapter into rescinding their invitation to Khalek, was able to claim victory in the struggle against so-called apologists for Syrian President Bashar al-Assad among the left. They were able to celebrate it as a win for rebel groups, who are in a protracted war against Assad which jihadist groups like Jabhat Fateh al-Sham and Ahrar al-Sham have come to dominate since an uprising in 2011.

But the victory comes at the cost of freedom of expression on a college or university campus. Particularly, students are deprived of the opportunity to hear speech and come to their own conclusions. A forum that is one of the best places in society for debates and disagreements to occur out in the open is shut down because hosts fear the intolerance of a few over-zealous individuals.

This is a tactic, which pro-Israel groups wield to suppress Palestinian solidarity activism. And yet, among the left, it is widely favored. It is supported when activists mobilize to stop racist sociologists like Charles Murray from speaking. It is endorsed when conservative darlings like Ben Shapiro or jackbooted authoritarians like Sheriff David Clarke are disinvited from speaking as a result of pressure.

Intense backlashes occur against those who question whether reactionary people should engage in such campaigns, however, the fact is if the rights of right-wing authoritarians to speak on campuses are defended, it will be harder for the right-wing to justify shutting down speaking events with left-wing speakers, who promote struggles for liberation to an extent that may deeply offend conservatives.

When “No Platforming” May Be Defensible

There may be instances where “no platforming” is defensible. Jeremy Waldron’s standard developed for his book, “The Harm In Hate Speech,” is useful and based in reason.

Waldron wrote, “Laws restricting hate speech should aim to protect people’s dignity against assault. I am referring to their status as anyone’s equal in the community they inhabit, to their entitlement to basic justice and to the fundamentals of their reputation. Dignity in that sense may need protection against attack, particularly against group-directed attacks, which proclaim that all or most of the members of a given group are, by virtue of their race or some other ascriptive characteristic, not worthy of being treated as members of society.”

“The distinction is in large part between objective or social aspects of a person’s standing, on the one hand, and subjective aspects of feeling, including hurt, shock, and anger on the other,” Waldron added. “A person’s dignity or reputation has to do with how things are with respect to them in society, not with how things feel to them.”

In other words, it is reasonable to protect people against assaults on their dignity, but there should be no laws or norms for the express purpose of protecting people from feeling offended.

Let’s apply this standard to Milo Yiannopoulos, a notoriously repugnant and bratty person. Before Yiannopoulos had his speech canceled at Berkeley College, he planned to out undocumented immigrants to help Immigration and Customs Enforcement (ICE) identify them for deportation.

At a speech at the University of Wisconsin-Milwaukee in December 2016, a projection of a photo of one of the university’s transgender students was displayed. “This quote unquote nonbinary trans woman forced his way into the women’s locker rooms this year,” Yiannopoulos declared, as he attacked her for using Title IX to ensure her rights were upheld on campus. He then added, “The way that you know he’s failing is I’d almost still bang him.”

“When you have a room full of people that are just laughing at you as if you’re some freak of nature, like you have some kind of mental illness—which is how he described me—it’s like, I don’t even know how to describe it, but it was way too much,” Adelaide Kramer, the transgender student, declared in response to Yiannopoulos’ crude attack on her.

Yiannopoulos was banned from Twitter for his vicious harassment of “Saturday Night Live” cast member Leslie Jones. He rallied and encouraged his followers to hit her with racial and misogynistic comments because an all-woman “Ghostbusters” reboot was produced.

These constitute assaults on dignity. While this kind of speech is definitely protected under the First Amendment, there are virtually no reasons why any venue would want to host such a person regularly engaged in such malicious conduct against people who could have their reputations irreparably harmed (not to mention their safety endangered). University of California, Berkeley, student Jack Palkovic, center, stands with others near a Berkeley College Republicans table in front of Sather Gate on campus in Berkeley, Calif., Thursday, Feb. 2, 2017. Palkovic claims he was attacked on the campus a day after protests led authorities to cancel a controversial speech. (AP/Jeff Chiu)

Yiannopoulos is a rare beast. People like Shapiro, Clarke, Murray, Asra Nomani, Nonie Darwish, and Ayaan Hirsi Ali have been disinvited from campuses in recent years. They may be revered by Fox News viewers yet they are largely unknown personalities. That is, until the left mobilizes to have their speaking events canceled because they do not like their bigoted or reactionary views.

When they have their events canceled, they instantly become a cause célèbre for those who value free speech. They effectively gain a platform as a result of the fact that a faction of people on or off campus “no platformed” them.

If chapters of the College Republicans, Young Americans For Liberty, Proud Patriots For God, Freedom, And America, or whatever the hell group were simply ignored when hosting these repulsive people, no one would ever know they came to universities to speak.

The other issue is these kinds of people are likely considered allies to President Donald Trump’s administration. Their views are considered conventional wisdom to many of the political operatives responsible for electing Trump. In contrast, the views of Palestinian solidarity activists, immigrants rights activists, Black Lives Matter activists, antiwar activists, environmental activists, and police and prison abolition activists are offensive and grotesque to the Trump administration.

That makes such voices exceptionally important for students to hear. However, if the left will not let conservative students host the people they want on campus, what happens when the right retaliates by escalating their efforts against speakers invited by left-leaning groups or students?

What if it becomes difficult to convince administrators that students should be allowed to host rabble rousers at the forefront of important social movements? What if the range of speakers acceptable on campuses narrows to moderate, boring, and uninteresting people, who tolerate the status quo? Or what if administrators are only open to corporate individuals, who have money and ties to networks of influential people that can bring prestige to the campus?

Requiring The Inclusion Of Opposing Views At Events

What if administrators decide to handle this trend of activism against controversial speakers by ensuring there is “balance” at political speaking events? This often happens with speakers invited to speak about Israeli apartheid.

In fact, this is what happened with Ben Shapiro in February 2016. William Covino, the president of California State University Los Angeles, canceled his event until the university could “arrange” for Shapiro to “appear as part of a group of speakers with differing viewpoints on diversity.” (Note: Covino eventually backed down and Shapiro did the event while protesters tried to block him and attendees from the university’s theater.)

There are all sorts of constitutional and free speech concerns if campuses are places, where groups are only allowed to host certain speakers if they appear with opponents. (Not to mention, it may become impossible to schedule events if individuals insist that they not appear in the same room with someone they loathe.)

Condemn what a person stands for and represents, but unless they are engaged in routine attacks on the dignity of defenseless individuals through their work, shutting them down is harmful to freedom on campus.

Protecting Against Dogmatism And Groupthink

Robert P. George, an American legal scholar and theological conservative, and Cornel West, a Harvard University professor and left-wing activist, came together after Charles Murray’s speech at Middlebury College was shut down and a professor was injured during a protest.

Both declared, “It is all-too-common these days for people to try to immunize from criticism opinions that happen to be dominant in their particular communities. Sometimes this is done by questioning the motives and thus stigmatizing those who dissent from prevailing opinions; or by disrupting their presentations; or by demanding that they be excluded from campus or, if they have already been invited, disinvited.”

“Sometimes students and faculty members turn their backs on speakers whose opinions they don’t like or simply walk out and refuse to listen to those whose convictions offend their values. Of course, the right to peacefully protest, including on campuses, is sacrosanct. But before exercising that right, each of us should ask: Might it not be better to listen respectfully and try to learn from a speaker with whom I disagree? Might it better serve the cause of truth-seeking to engage the speaker in frank civil discussion?”

“Our willingness to listen to and respectfully engage those with whom we disagree (especially about matters of profound importance) contributes vitally to the maintenance of a milieu in which people feel free to speak their minds, consider unpopular positions, and explore lines of argument that may undercut established ways of thinking. Such an ethos protects us against dogmatism and groupthink, both of which are toxic to the health of academic communities and to the functioning of democracies,” George and West concluded.

Bearing these well-reasoned words in mind, the students at the University of North Carolina, who canceled Khalek’s event, responded on March 20 to those upset by the disinvitation. They indicated, “Several members of SJP chapters throughout the US, some Arab and non-Arab scholars of the Middle East, and many Palestine solidarity activists encouraged us to cancel.” They cited the “fierce disagreements” over Khalek’s “political perspectives” on Syria to explain their decision.

“Fierce disagreements” should never justify the disinvitation of a speaker. On the contrary, it should be treated as an opportunity to take advantage of a free and open society by showing the fortitude to grapple with contentious arguments, especially those which divide people to the point where they become committed to destroying the careers of professional people.