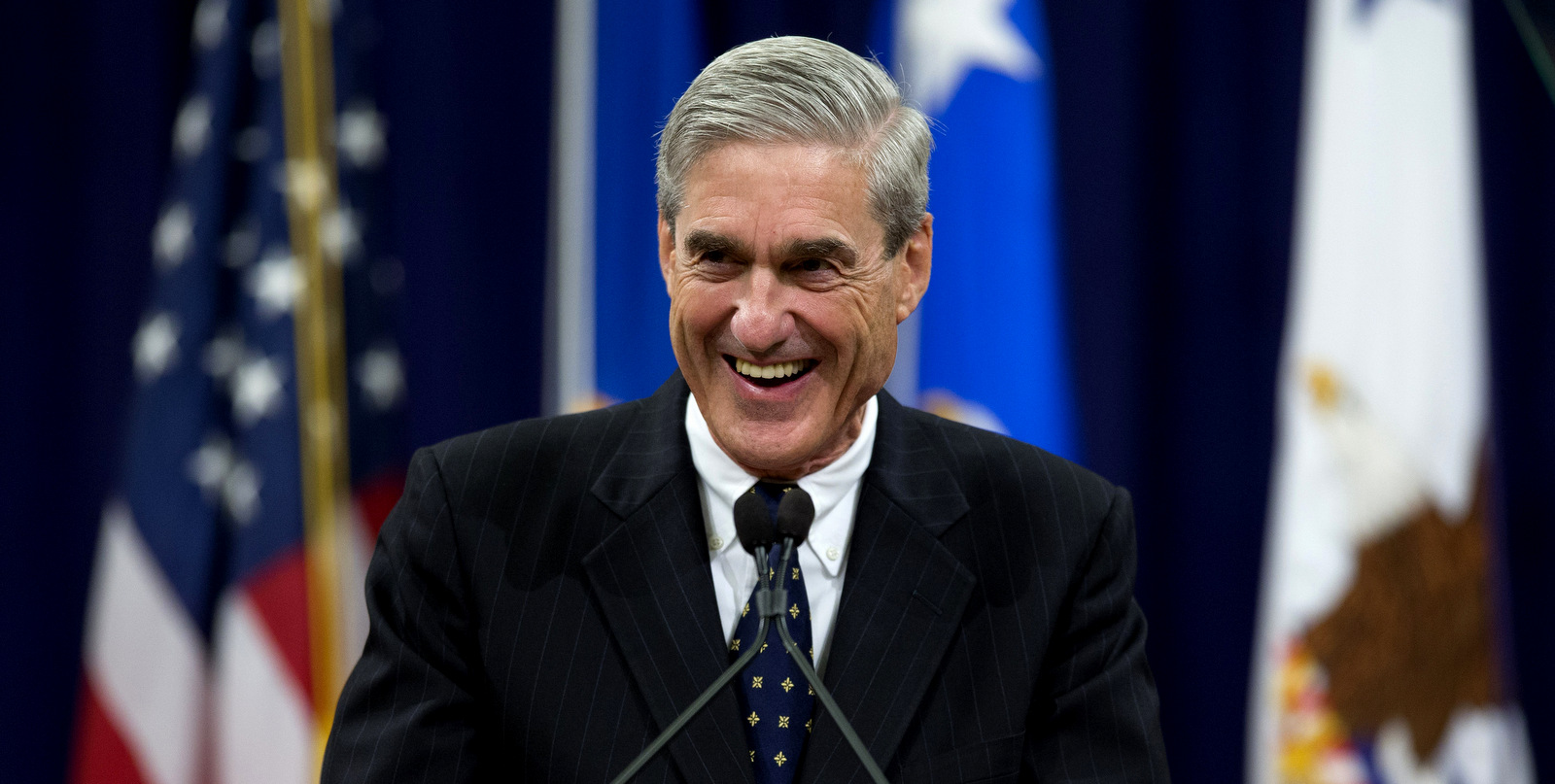 After a year of investigating whether the Trump campaign colluded with Russia, Special Counsel Robert Mueller has, in effect, admitted that he has hit a dry well.  He is under strong pressure to keep the charade going until the November elections, however, so he and his high-priced legal brain-trust have devised a new tactic.

One would think they could come up with something less transparent.  After all, Mueller was FBI Director from 2001 to 2013 and knows where the bodies are buried, so to speak.  But it does not appear likely that he is going to get his man this time.  So, rather than throw in the towel, he is making a college try at cajoling President Donald Trump into helping him out.

Today’s New York Times print-edition lede by Michael S. Schmidt, “Questions for President Show Depth of Inquiry Into Russian Meddling,” bespeaks an embarrassingly desperate attempt to get President Donald Trump to incriminate himself.  And, given Trump’s temperament and his dismissive attitude toward his legal advisers, the President might just rise to the bait.

Schmidt reports that Mueller’s high-powered legal team has prepared over four dozen questions for Trump “on an exhaustive array of subjects.” Assuming the Times is correct and the questions indeed are Mueller’s, an earlier electronic times headline would seem more to the point: “Mueller Has Dozens of Inquiries for Trump in Broad Quest on Russia Ties and Obstruction.”  Not depth, as in the earlier headline, but breadth.  Deep dry well already dug.  A “broad quest,” yep, now that could be the ticket!   The questions leaked to the Times betoken a very wide quest, indeed, stopping just short of the proverbial, “When did you stop beating your wife?”  Or, in Trump’s case, “What discussions did you have with Stormy Daniels during your dalliance with her?” Schmidt reports that “the open-ended queries appear to be an attempt to penetrate the president’s thinking, to get at the motivation behind some of his most combative Twitter posts and to examine his relationships with his family and his closest advisers.”

Here’s one “open-ended” query as described by the Times: “[W]hat happened during Mr. Trump’s 2013 visit to Moscow.” That’s the trip about which an opposition-research investigator working for the Clinton campaign (through a cut-out) came up with the scurrilous “pee-tape” story about Trump consorting with prostitutes.

Also included in the “exhaustive array of subjects” are questions like this: “What discussions did you have with Reince Priebus in July 2017 about obtaining the Sessions resignation? With whom did you discuss it?” In an attempt to put some gravitas behind this question, the Times explains that “Mr. Priebus, who was Mr. Trump’s chief of staff, has said he raced out of the White House after Mr. Sessions and implored him not to resign. Mr. Mueller has interviewed Mr. Priebus and would be able to compare his answers with those of Mr. Trump.” Aha!  Might this be a clue to Mueller’s approach?  Something informally called The Flynn-Papadopoulos Playbook for Dummies?  What if the President’s recollection does not exactly match that of Priebus?  A gotcha moment?  Perjury.

But does anyone really care if recollections don’t square on such trivia?  Never before has it been clearer that the Mueller investigation is 90 percent charade.  Often, lawyers are not very good at the game.  This is no exception.

Theater of the Absurd

Mueller knows better than anyone, where and how to find the dirt on the Trump campaign, collusion with Russia, or anything else.  That he has been able to come up with so little — and is trying to get some help from the President himself — speaks volumes.

Mueller does not need to send his team off on a “broad quest” with “open-ended” queries on an “exhaustive array of subjects.”  If there were any tangible evidence of Trump campaign-Russia collusion, Mueller would almost certainly have known where to look and, in today’s world of blanket surveillance, would have found it by now.  It beggars belief that he would have failed, in the course of his year-old investigation, to use all the levers at his disposal — the levers Edward Snowden called “turnkey tyranny” — to “get the goods” on Trump.

Here’s what the “mainstream” media keeps from most Americans:  The National Security Agency (NSA) collects everything: all email, telephone calls, texts, faxes — everything, and stores it in giant databases.  OK; we know that boggles the mind, but the technical capability is available, and the policy is to “collect it all.”  All is collected and stored in vast warehouses.  (The tools to properly analyze/evaluate this flood of information do not match the miraculous state of the art of collection, so the haystack keeps growing and the needles get harder and harder to find.  But that is another story.)

How did collection go on steroids? You’ve heard it a thousand times — “After 9/11 everything changed.”  In short, when Vice President Dick Cheney told NSA Director and Air Force Gen. Michael Hayden to disregard the Fourth Amendment, Hayden saluted sharply.

And so, after 9/11, NSA’s erstwhile super-strict First Commandment, “Thou Shalt Not Collect Information on Americans Without a Court Warrant,” went the way of the Fourth Amendment.  (When this became public, former NSA Director Adm. Bobby Ray Inman stated openly that Hayden violated the law, and former NSA Director Army Gen. William Odom said Hayden ought to be courtmartialed.  The timorous “mainstream” media suppressed what Inman and Odom said.)

On January 17, 2014, when President Barack Obama directed the intelligence community to limit their warrantless data searches for analysis/evaluation to two “hops,” either he did not understand what he was authorizing or he was bowing, as was his custom, to what the intelligence community claimed was needed (lest anyone call him soft on terrorism).

Intelligence directors were quite happy with his decision because, basically, it authorized them to spy on anyone on the planet.  To explain: “Hop” is a term used in Graph Theory for social network analysis.  (In WW I, this activity was called net reconstruction.  During and after WW II it was labeled contact chaining.  The general practice in the U.S. goes back at least as far as the Civil War.  By watching who was visiting whom in Washington, the Pinkertons were able to uncover a Confederate spy ring.)

“Hop” refers to one connection in a series of connections in a social network.  For example, I call you (that’s the first hop); then you call someone else (second hop).  Another term for hop is degree of separation, 2 hops = 2 degrees of separation.

Several of us NSA alumni/members of Veteran Intelligence Professionals for Sanity (VIPS) tried, in vain, to warn the White House of the danger of allowing the second hop to apply to government departments or to businesses. The reason is straightforward; if you include “businesses” like Google, for example, which has up to a billion connections per day, it will not take very long before you have included everyone.

Small wonder, then, that leaders of NSA and the rest of the intelligence community were delighted with Obama’s January 2014 decision.  It meant they could continue collecting and targeting anyone they wanted.  In essence, this means that the FBI/NSA/CIA believe they have approval to surveil any US citizen without a court warrant.  And that is what they are doing.

But when the FBI, for example, does find evidence enough to prosecute, it is has to circumvent rules of criminal procedure by creating a “parallel construction.”  This involves obtaining evidence similar to that in NSA-collected data and using the new “legal” evidence in court, without telling the judges, lawyers, or defendants where they originally got it from. This, of course, can amount to perjury and applies also to any warrant requests and sworn affidavits submitted to get the warrants.  Former FBI Director Mueller has said he was comfortable with this process, which the Bureau has been using since 2001, right after 9/11.

In a 2011 interview by Barton Gellman for Time magazine, Mueller made it clear his FBI had been using the “Stellar Wind” program since late 2001. This is the program by which the NSA has been collecting and storing domestic data on virtually all US citizens.

So, in essence, Mueller and his FBI were fine with deceiving court and defendant alike, denying defendants the right to proper and full discovery. Finally, performing surveillance on anyone in the Trump campaign or in his administration, would mean the NSA/FBI/CIA could “legally” (by their own warped standards) spy on everyone associated with the Trump administration even retroactively, going back to before the campaign began. That means Mueller could have access to all the answers before he even asks Trump the first question.

We do not know exactly what prompted Trump to claim a year ago that he had been “wiretapped” (“wiretapping” has gone the way of the Edsel Ford), but if he was told he had been surveilled, he was probably accurately informed.  No doubt he was/is but one hop, skip, and a jump away from others under surveillance, without any requirement even for the skip and the jump — much less a warrant.

Ray McGovern ([email protected]) was a CIA analyst for 27 years; from 1981 to 1985 he briefed the President’s Daily Brief one-on-one to President Reagan’s most senior national security officials.

William Binney ([email protected]) worked for NSA for 36 years, retiring in 2001 as the technical director of world military and geopolitical analysis and reporting; he created many of the collection systems still used by NSA.