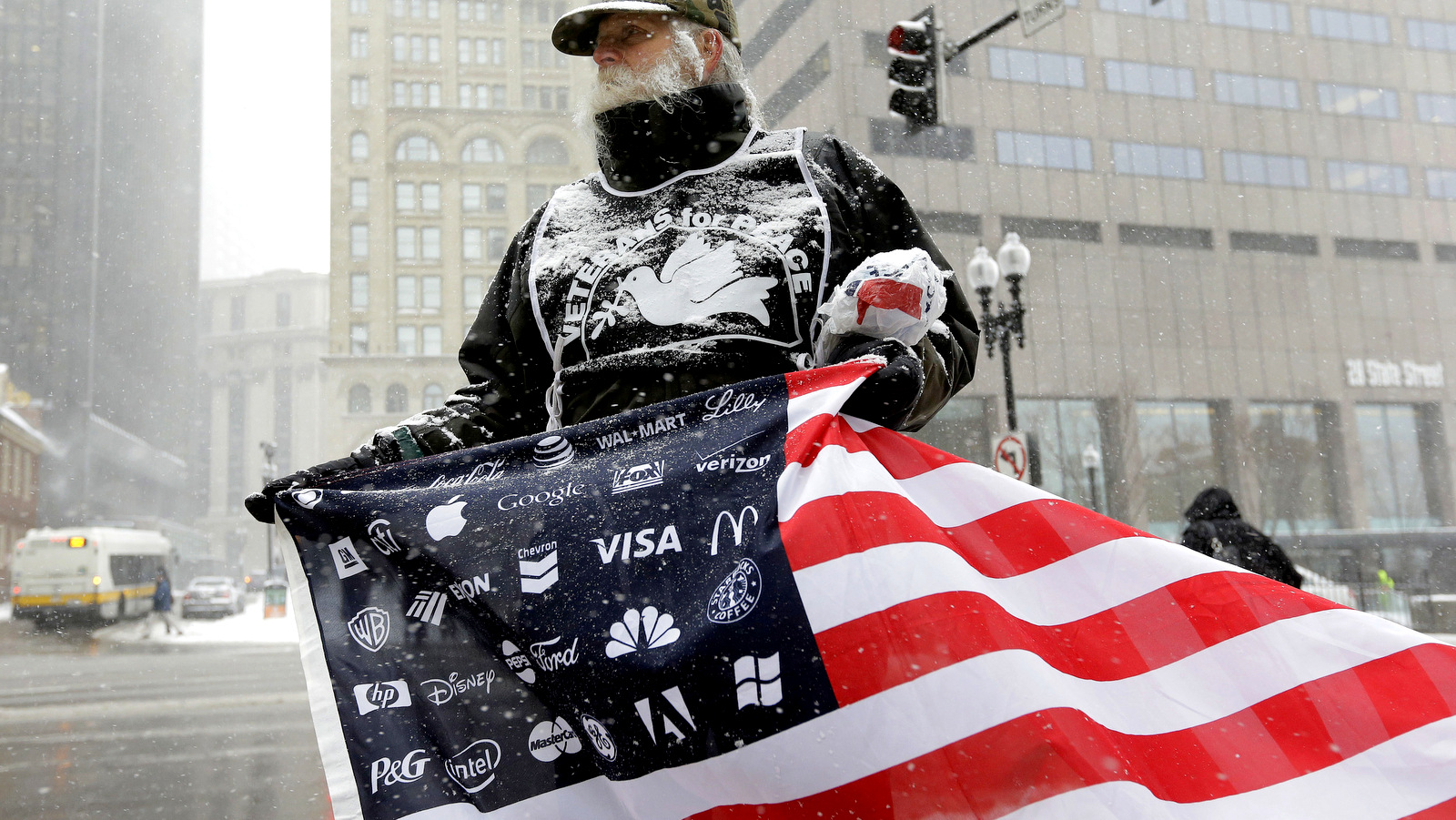 When looking over the newsworthy events that took place in the United States throughout 2016, a common thread ties many of them together. So many major events illustrate a real failure of the powers that be to solve problems.

And these problems are not new. The epidemic of opiate addiction has been brewing since the 1990s when American doctors, incentivized by medical drug manufacturers, began over-prescribing pain killers. The crisis intensified when the US invasion of Afghanistan unleashed the country’s poppy growers, flooding the market, and driving the price down. Now, cheap heroin is everywhere and people are dying. In 2015, more Americans died from drug overdose than from gun violence, another problem plaguing America. As 2016 comes to a close, the numbers of drug-related deaths are still rising.

The Pulse nightclub shooting broke records in 2016 for America’s ongoing problem of gun violence. Mass shootings, in which deranged individuals with guns begin slaughtering people, have become a regular occurrence in recent years. Many times President Barack Obama has appeared on television to comfort a grieving nation and call for tighter gun control. The present order is unable to adequately address the issue, and the shootings continue. As police stand guard, armed anti-Muslim protestors, who did not want to give their names, stand across the street from a mosque during a demonstration in Richardson, Texas, on Saturday, Dec. 12, 2015. (AP Photo/LM Otero)

One could say that problems related to race are almost a built-in problem for the United States, which defined African enslaved persons as 3/5 of a human being in its Constitution. Since the end of slavery, after a bloody civil war, there have been endless protests, tensions, and controversies, both violent and peaceful, related to racial questions. The death of Muhammad Ali, the world heavyweight boxing champion who had aligned himself with Black nationalism and converted to Islam during the 1960s, gave the country a moment to reflect on the long history of racial strife.

2016 is the final year of the presidency of Barack Obama. His presidency began with so much optimism about a “post racial society” and the belief that this age-old source of disagreement on the American continent could be finally resolved with a dark skinned man as commander in chief. This final year of Obama’s presidency is notable for illustrating how one blatantly unfulfilled these expectations.

Protests swept Charlotte, North Carolina in response to the killing of Keith Lamont Scott by police. The country nervously watched as unrest swept yet another city, with fresh memories of the violence that swept Baltimore and Ferguson in the previous year.

In addition to the thousands of peaceful protests, in Baton Rouge, Louisiana, and Dallas, Texas, police officers were shot and killed by individuals who were angry about the documented wave of unpunished police brutality. After these shootings, many mostly white Americans, who had been almost silent during the continuous wave of “Black Lives Matter” protests, expressed sympathy for police. A huge gap in public opinion became very apparent.

The isolated, violent individuals who were outraged by police brutality were certainly not the only Americans to express their political views with firearms. The year of 2016 began with the seizure of federal property from January 2nd to February 11th by “sovereign citizens” and right-wing militia organizations in Oregon. A shootout with the FBI and state police eventually ensued. One of the armed militants was killed, and 27 were arrested. Gun-toting, right-wing organizations that talk of “constitutional liberties” and opposing the federal government are notably present across the US.

A Twist in American Politics Supporters of Sen. Bernie Sanders, I-Vt., march during a protest in downtown on Sunday, July 24, 2016, in Philadelphia. (AP/John Minchillo)

The 2016 presidential election, much like the increase of protests and political gun battles, revealed how divided, and desperate the country is. Bernie Sanders, a US senator from Vermont who describes himself as a “socialist,” long a forbidden term in Americana, was welcomed onto the national political stage.

Millions of Americans voted for Sanders in the Democratic presidential primary. Leaked emails showed that the Democratic National Committee was working behind the scenes to ensure his defeat, and secure the nomination for longtime party power broker Hillary Clinton. The revelations showed a kind of cynical and dishonest internal atmosphere at the top of the Democratic Party, and therefore disillusioned many activists.

Sanders’ challenge within the Democratic Party seemed mild compared to Trump’s complete shake-up of the Republican Party. Donald Trump, a New York City real estate tycoon and billionaire, who declared his candidacy was at first treated almost as a joke, but ultimately won the election.

Neither Trump nor Sanders were, in reality, a very big departure from the American political status quo. Sanders talk of socialism was not a call for a centrally-planned economy, but just for some European-style welfare state reforms. Trump’s nationalism and derogatory words for certain demographics is a far cry from fascism or Nazism. The sudden, unpredicted success of both political mavericks was based on an extreme dissatisfaction and a longing for “an outsider.”

“You’re on Your Own” American political discourse has long been defined by liberalism. The ideals of the European enlightenment, expressed by John Locke, Immanuel Kant, and others, and applied by Washington, Jefferson, and Hamilton put the individual above all else. In a repudiation of feudalism, the revolutionaries of 1776 embraced “freedom” as the true value of America.

In economic terms, this has meant unrestricted capitalism. Unlike most western countries, the US government does not provide public healthcare to its citizens. American college students, even those who attend public universities, must pay for their education, and millions remain in debt for decades. Employment is not guaranteed, and social services for low-income families are limited.

The American economic mantra is “personal responsibility,” i.e. “you’re on your own.” While the US has the richest of the rich, measurements of basic societal health show that many get left behind. The rates of infant mortality, life expectancy, and poverty are statistically much worse than other western industrialized countries.

In social terms, American liberalism has meant an ever increasing break down of traditional structures. Religion is considered to be a personal matter, and government institutions are forbidden from expressing faith or invoking divine authority. The US Supreme Court has declared same-sex marriage is a constitutional right. Now debates about whether or not bathrooms in elementary schools should be gender segregated have erupted across America.

The ideology of liberalism, which has escalated over the course of American history, prescribes for the citizen to be like Thomas Jefferson’s ideal “yoeman’; alone, unmolested and unattached to others, free to “pursue happiness” on his own, with no obligation to society, to his family, to God, or to anyone else.

However, as the crisis of racial tension illustrates, “No man is an island.” Americans can watch the exact same video recordings, yet a majority of whites will defend the police, while African Americans will see brutality. Despite the obsessive individualism, Americans still identify themselves with groups they consider to be similar to themselves, and thus view the world accordingly.

Group identification is natural, and people have always had a collective nature. The entire history of humanity consists of humans cooperating, working together, agreeing on rules and expectations, and in the process, advancing civilization toward greater heights. People join hands against the backdrop of an American flag as thousands of marchers meet in the middle of Charleston’s main bridge in a show of unity after nine black church parishioners were gunned down during a Bible study, Sunday, June 21, 2015, in Charleston, S.C. (AP/David Goldman)

A severe lack of collective identity is very apparent in present day America. Items considered to be “public property” are in severe decay. The system of public transportation in Washington DC made national headlines when it shut down for a single day because of continued accidents, which had resulted in injuries and a single fatality. Throughout 2016, accidents plagued the Amtrak public train system, which like DC transit system, also faces a lack of funding. During the 2016 academic year, millions of children have been left without schools to attend, as their for-profit charter schools, run by corporations, which have replaced public schools in many cities, have closed down mid-semester.

In the states that ultimately secured Trump’s victory (Wisconsin, Michigan, Ohio, and Pennsylvania) one can find numerous neighborhoods that were once prosperous, now filled with empty, foreclosed homes. The factories that once employed millions of American industrial workers have closed their doors. The jobs that have replaced them offer much lower pay, to a generation which is unlikely to see the once lauded “American dream” of middle class prosperity.

Suicide rates across the United States are rising, as are cases of mental illness. Polls show that Americans increasingly find a lack of meaning and purpose in their lives, as their TVs and iPhones push them to purchase more and more, and live in pursuit of short-term pleasures. Economic security is also in question, as employment is far more short term for young workers, while the cost of housing and other living expenses are rising.

As Trump is sworn in at the beginning of 2017, the attempts to resolve the escalating crisis will continue. The search for answers outside of standard political discourse is likely to continue as well.