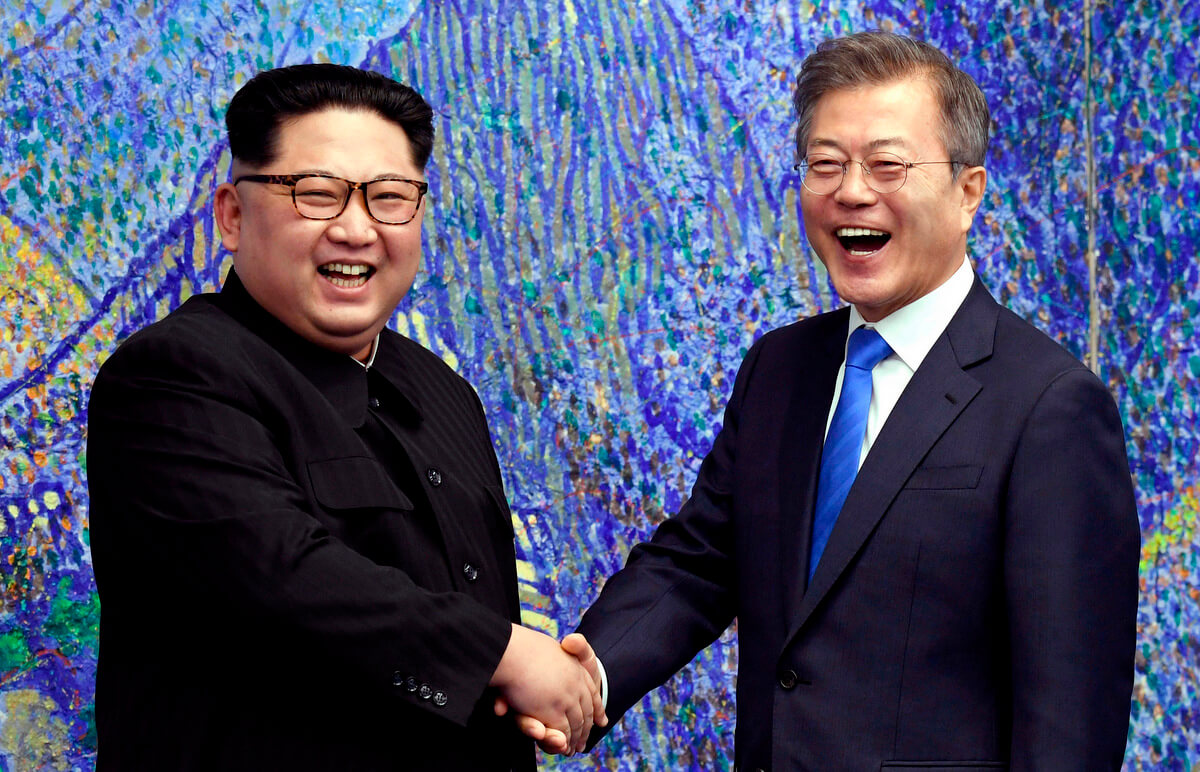 “We had lived together for five thousand years but apart for just 70 years. Here, at this place today, I propose we move forward toward the big picture of peace in which the past 70-year-long hostility can be eradicated and we can become one again.” — South Korean President Moon Jae-in

PYONGYANG, NORTH KOREA — North Korean leader Kim Jong-un and his counterpart from the South, President Moon Jae-in, made a powerful show of unity with the signing of the Pyongyang Declaration on Wednesday, underscoring their pursuit of “mutual reciprocity, common good and shared prosperity,” a cessation of tension, and an explicit call for “Korean autonomy and the principle of self-determination.”

The document seems intended to send a clear message to the United States that the two sides “confirmed the common goal of realizing, through complete denuclearization, a nuclear-free Korean Peninsula” and ending its 70-year division, despite Washington’s insistence that Pyongyang unilaterally abandon its nuclear arms and ballistic missiles as a first step in confidence-building measures.

The joint declaration’s Action Plan for Denuclearization appeared intended to bring the U.S. back to the table, and pledges the verifiable and irreversible shutdown by the North of its missile engine test site at Tongchang Village and the Yongbyon nuclear site – “contingent on corresponding measures by the U.S.,” as Moon noted.

The statement also underscores the two sides’ commitment to gradually beginning a process of economic integration, joint industrial and tourism sites, and the construction of east-to-west road and rail links – all of which remain impossible given the strict controls under U.N. Security Council resolutions and U.S. policy on doing business with the North. The two leaders also pledged to withdraw 11 guard posts from the Demilitarized Zone (DMZ), which continues to divide the two countries that technically remain in a state of war.

Our society can be reshaped into a nation that exists solely for the people, as we depart from the privilege, corruption and disregard for human rights that have been spawned by the threat of war and ideological confrontation.”

In a speech before an audience of 150,000 North Koreans at Pyongyang’s May First Stadium – the first-ever speech by a South Korean head of state in the Democratic People’s Republic of Korea (DPRK, as the North is officially known) – President Moon gave what both sides hope will go down in history as a de facto declaration that the Korean War has come to an end and given way to “the principle of autonomy for our people, whereby we ourselves determine our own fate.”

During my stay in Pyongyang, I have witnessed the city’s remarkable progress. Deep in my heart, I have recognized what kind of country Chairman Kim and his compatriots in the North want to build. I have keenly realized your wholehearted longing for reconciliation and peace for all Koreans. I have seen the indomitable courage in your determination to stand on your own feet even in the face of hard times, all the while maintaining the pride of the Korean people.

We had lived together for five thousand years but apart for just 70 years. Here, at this place today, I propose we move forward toward the big picture of peace in which the past 70-year-long hostility can be eradicated and we can become one again.”

On Thursday, the two leaders continued to display their mutual affection with an unscheduled hike along with their wives to the top of the legendary Mount Baekdu, a volcanic mountain on the border with China and the highest peak on the peninsula.

Upon returning to Seoul, Moon made clear that the onus was on the United States to continue the positive forward momentum in achieving denuclearization and a formal end to war on the peninsula, and that Kim desires another meeting with U.S. Secretary of State Mike Pompeo in Pyongyang. Kim also reportedly expressed his hope that he could hold a second summit with U.S. President Donald Trump.

An earlier visit by Pompeo to the DPRK capital scheduled for August was abruptly called off by Trump following prickly correspondence between the two sides and a general impasse in U.S.-DPRK diplomacy

“Tremendous things” or stagnant waters ahead?

Trump greeted the Moon-Kim summit with optimism in line with his general approach of boosting his administration’s progress addressing the nuclear crisis on the Korean Peninsula.

Speaking from the South Lawn of the White House following the signing of the declaration, Trump said:

We had very good news from North Korea, South Korea. They met, and we had some great responses. I got a tremendous letter from Kim Jong-un.  As you know, it was delivered three days ago. We’re making tremendous progress with respect to North Korea … A lot of tremendous things.”

“And now we’re — the relationships, I have to tell you, at least on a personal basis, they’re very good,” he added.

When asked the status of the reciprocal measures Kim desires as a first step toward denuclearization, the U.S. leader responded vaguely:

Yet Washington’s “calm” has extended to its attitude toward augmenting its “maximum pressure” policy toward Pyongyang. The DPRK has expressed its dissatisfaction with U.S. policies since the June Singapore summit, including Washington’s insistence that any goodwill gestures – such as U.S. acquiescence to an end-of-war declaration or relaxed sanctions – would come as a reward, rather than prerequisite, for the DPRK making moves like disclosing its nuclear and missile facilities.

Pyongyang has denounced such demands for unilateral disarmament as “double-dealing … gunboat diplomacy” and “gangster-like” attempts to “browbeat” the DPRK into submission.

Moon has repeatedly stressed his hope to jointly announce with Washington an end to the Korean War by year’s end, a move he has said he hopes to discuss next week at the U.N. General Assembly in New York.

Yet Washington has looked askance at any agreement that could potentially alter the present security arrangement in Northeast Asia, given the importance of the U.S. military presence in the peninsula in the framework of its broader strategic considerations, especially vis-à-vis rivals Russia and China.

While Moon has pledged that he and Kim don’t feel that an end-of-war declaration would affect the presence of U.S. in the peninsula, Washington remains fearful of the possibility that the formal end to hostilities would make it nearly impossible to justify the continued existence of United Nations Command (UNC) in the face of pressure by its regional foes.

The UNC, created by a 1950 UN mandate at the dawn of the Cold War, is the U.S.-dominated multinational body that acted as the main war-fighting institution during the Korean War. It eventually served as the primary enforcer of the armistice signed in 1953, and remains a main body ensuring U.S. hegemony in the region vis-à-vis a rising and assertive China.

The U.S. has boosted the importance of UNC as Seoul has clamored to take back wartime operational control of its troops from the South Korea-U.S. Combined Forces Command, which likewise falls under Pentagon jurisdiction. Under current treaty obligations, should diplomacy fail, the South’s military will remain firmly subordinate to Washington.

Such factors, along with the continued sanctions on Pyongyang, make the Moon government especially vulnerable to Washington’s pressure and ensure Seoul’s subordinate role in the U.S.-dominated Asia-Pacific security architecture.

The hard work of achieving the lofty pronouncements of the Pyongyang Declaration remains a task for the Korean people, yet Washington unfortunately remains a gatekeeper and final authority whose motivation to back Kim and Moon’s roadmap toward peace remains dubious at best.