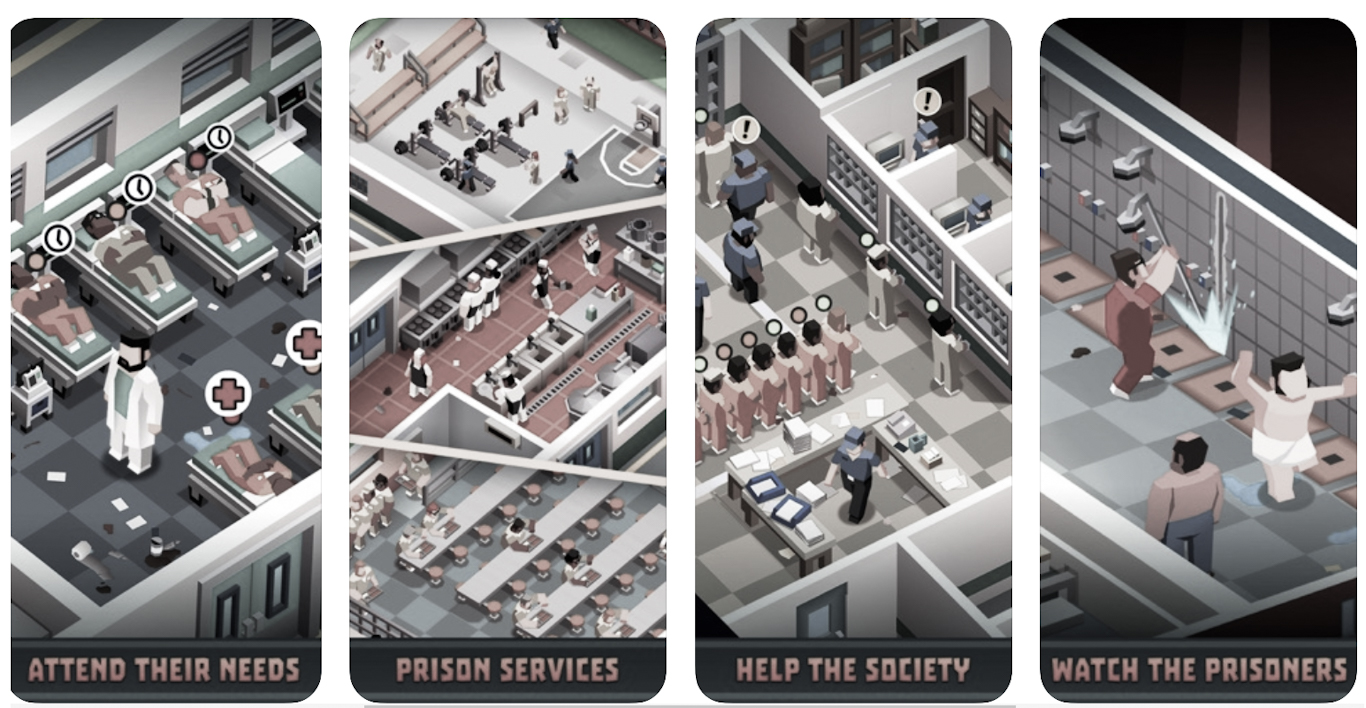 A new game called “Prison Empire Tycoon” is going viral. Released in late May, it has risen to become the current number one strategy game in Apple’s App Store and has been among the top 20 most popular games overall since its launch, with at least  3 million downloads to date. In line with many other popular business simulation games like the “Railroad Tycoon” and “Rollercoaster Tycoon” series, where users create huge transport networks or design and run their own theme parks, the point of “Prison Empire Tycoon” is to make money running a private American prison.

During the tutorial at the start, a baton-wielding guard instructs you, telling you that “the state pays us good money” to manage the “lowlifes” they send your way. “It’s a perfect business,” he says, as he shows you how to send inmates to solitary confinement, something that is near-universally described as torture.

The game is undeniably well put together, with a clear, functioning world and appealing, chunky graphics. And judging from the extremely positive reception the game has received, users see nothing wrong with its content either. Indeed, the biggest complaints in the negative reviews left online are that it has a number of bugs, has a tendency to crash, and features a lot of annoying ads and in-app purchases.

With almost 2.3 million people locked up across a sprawling network of thousands of facilities, the United States has by far the highest incarceration rate in the world, significantly worse than brutal dictatorships in Africa, Latin America or Central Asia. The U.S. imprisons its citizens at over ten times the rate of European countries like Denmark or Sweden, and over seventeen times that of Japan. Three-quarters of people held in jails have not been convicted of anything.

For-profit private prisons are a growing phenomenon. Since 2000, the number of people incarcerated in them has increased by 39.3 percent, compared to an overall rise of 7.8 percent. Some states have seen their private prison industry explode. Arizona’s private prison population for example has grown nearly sixfold over the last 20 years. Indiana and Ohio’s have quadrupled, while Florida’s has tripled.

Private prison corporations have a clear and perverse incentive to keep their charges in their custody for as long as possible and to make sure they return. In 2010, a federal grand jury convicted Pennsylvania judges of taking $2.6 million in bribes from for-profit juvenile detention facilities in exchange sending thousands of children to jail, often over the protestations of their probation officers.

Writer and prison critic Chris Hedges, who has taught at a number of penitentiaries, called prisoners the ideal American worker; they do not receive any benefits or pensions, are not paid overtime, cannot organize or go on strike, have no vacations or sick days, never show up late to work, cannot complain, and if they try to protest they can be beaten or tortured in solitary confinement. As such, he concludes, prisons “are models for what the corporate state expects us all to become.” According to a 2017 study by the Prison Policy Initiative, incarcerated workers in non-industry prison jobs are paid between $0.86 and $3.45 per day, a significant decline from previous years.

These wages are used as a battering ram against wages across society. Right now, California is facing a critical shortage of firefighters to tackle the summer forest fires, precisely because the state has relied on prison labor, rather than unionized firefighters. California’s prison population is currently on lockdown after particularly severe COVID-19 outbreaks across the state’s correctional facilities.

While many people are working to change or abolish the institution altogether, the massive prison population and terrible conditions found inside have become so accepted that Chelsea Manning’s jailer is running a successful campaign for Congress in Alabama, as a Democrat. The runoff election is on Tuesday.

Video games are also used to sanitize other inherently violent institutions. Among the most popular genres of games are hyper-realistic first-person shooters like the “Call of Duty” franchise, where players play as American troops gunning down huge numbers of faceless Arabs. The U.S. Army has its own eSports team which it uses to groom suggestible teenagers into joining the military. Indeed, the Air Force has a recruitment tool game on its own website which allows you to drone bomb Iraqis and Afghans. Players who perform well are prompted whether they would like to do this in real life.

The fact that the reception to “Prison Empire Tycoon” has been overwhelmingly positive, with few people remarking on its problematic content, goes to show how normalized the prison industrial complex has become and how few people recognize the dystopian depths that society has sunk to.