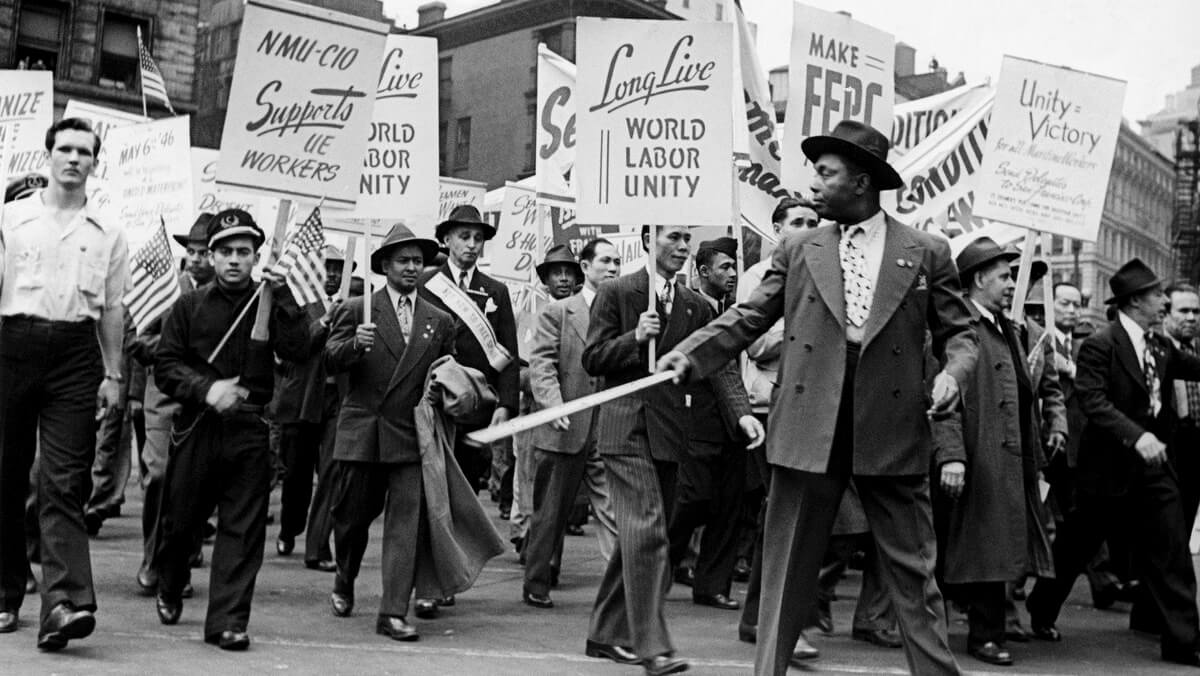 In 1897, the president of Fulton Bag and Cotton Mills in Atlanta hired 20 Negro women to work in the folding department of one of the mills. The other 1,400 workers, all white, promptly walked off the job in protest. According the historian Philip S. Foner in his book Organized Labor and the Black Worker, the company agreed to fire the black workers on one condition: the white workers would have to work overtime for free.

When West Coast longshoremen went on strike in 1934 at the height of the Great Depression, Blacks who had consistently been rebuffed in their efforts to integrate the docks, jumped at the chance to work, albeit for smaller paychecks than their white peers.

Confronted with a failing strike, the head of the longshoremen’s union, an Australian émigré named Harry Bridges, toured African-American churches in California’s Bay area, according to the late black journalist Thomas Fleming.

From the pulpit, Bridges acknowledged the union’s historical mistreatment of Blacks, but promised skeptical parishioners that if they respected the pickets, they would work the ports up and down the West Coast, earning the same wage as white dockworkers.

They did, and the strike’s subsequent success triggered a wave of labor militancy that not only imbued the economy with buying power, but connected workers’ discontent with broader political struggles for affordable housing, free public education, infrastructure improvements, and civil rights.

In his classic book, Racism and the Class Struggle, published in 1970, the radical black writer and Detroit auto worker James Boggs wrote:

Only recently, at the Chrysler-Jefferson plant where I work, when it was rumored that management was going to promote a few Negroes into the skilled trades, it was the steward who rushed to the men to arouse them to protest against Negroes coming into the department.”

With another Labor Day upon us, perhaps it is a good time to revisit the question “Who killed organized labor?”

All evidence points to assisted suicide. Historically, the labor question in the U.S. has turned on how white employees respond to a single question: Are you a worker, or are you white?

Employers began asking the question of Italian, Irish, German and Slavic emigres as the country began its industrial ascent in the years following the Civil War. With few Blacks in their home countries, and maturing industries, their response was largely one of ambivalence, at least initially. The 1887 Haymarket demonstration in Chicago and the New Orleans General Strike in 1892 were interracial affairs.

But through the media and their political surrogates, the industrialists bombarded European settlers with racist depictions of Blacks as dangerous, subversive, and inhuman. By the time D.W. Griffith’s Birth of a Nation was released in 1915, white supremacy was mostly an article of faith for Whites, generally, and organized labor specifically. Labor unions remained segregated, allowing employers to merely hire one group as scabs whenever the other went on strike.

A biracial general strike: what labor solidarity looks like

That changed suddenly with the 1934 General Strike in San Francisco. Said one dockworker to the historian Foner:

Negro-white unity has proved to be the most effective weapon against the shipowners, against the raiders and all our enemies.”

But they didn’t stop there, shutting down the whole of Alameda County for the better part of two days, ordering businesses to close, and turning back deliveries of everything other than essential medical supplies and beer, which they commandeered to hold a biracial bacchanal in the streets of Oakland — dancing, singing, and exulting in the power of the many.

It was the last general strike in U.S. history. Within months, Congress overrode President Truman’s veto of the Taft-Hartley Act which, among other things, outlawed so-called sympathy strikes, and mandated trade unions to expel Communists — who were close allies of the African-Americans — from their ranks.

“Labor unions, which were supposed to be the most advanced part of America, are, to this day, practicing and fostering discrimination in the same manner as every other segment of American society.”

With labor at its peak, poverty at its valley; then a long slide down

Those numbers are not academic. The nation’s poverty rate dipped to its all-time low in 1973 as well.

Beginning in earnest with Wall Street’s 1975 takeover of New York City’s budget, corporate executives have wooed both Democrats and labor union leaders with increasing assertiveness, in a concerted effort to thwart the interracial labor movement that is the only fighting force to ever battle the plutocrats to a draw. Using the city’s budget problems to depict radical Blacks and Latinos as reckless and unpatriotic, Wall Street bankers convinced white labor leaders to invest the rank-and-file pension funds in financial instruments — sometimes exotic — and divided their loyalties. President Ronald Reagan’s constant race-baiting and scapegoating of Cadillac-driving “welfare queens” accelerated the defections of Whites from organized labor.

So estranged are labor leaders from communities of color that when the Daughters of Charity religious order decided to sell a prized San Jose hospital in 2015, the two unions representing nurses — Service Employees International Union and National Nurses United — respectively supported bids from a Wall Street hedge fund, and a troubled for-profit hospital management firm, neither of which was endorsed by the community, which favored a bid by the county.

What proved the undoing of the American labor movement was not the bloodlessness of conservatives, but the faithlessness of liberals; not the 1 percent’s dearth of compassion, but the 99 percent’s failure of imagination; not the corruption of the managerial class but trade union leaders’ desertion of the very communities that made trade unions a force to be reckoned with in the first place.

“You got to dance,” the immortal Molly Ivins once wrote, “ with them what brung you.”

Still there are signs of a rebirth. The influx of Latino workers — especially the post-NAFTA Mexican workers who have been radicalized by peasant and worker revolts in that country — has reintroduced proletarian radicalism, despite employer efforts to turn the immigrant community against Blacks and organized labor. The 2008 occupation of Republic Windows and Doors in Chicago was led by a workforce of 250 employees, of which roughly 200 were Mexican emigres and 50 were African-American. And last month, dozens of Latino construction workers walked off an Indianapolis construction site to protest harassment and abuse by a white supervisor. The boycott was filmed by a black welder who exhorted African-Americans to parrot the Latinos’ radicalism.

Everybody wants to move as one. That’s why you look at the comments [on the video] and see black people saying, ‘Yeah, that’s what we need to do. [The workers] were walking out with their heads up, strong. It touched me… I was like, wow, this is beautiful!”