Knox County Prosecutor Chip McConville (Contact: [email protected] and (740) 393-6720) from Mt. Vernon, Ohio recently decided that it was completely appropriate for his office to notify local residents and businesses about an upcoming pro-gun rally and warn residents to avoid the area where the rally was to take place. The office also posted a picture on their Facebook page indicating where gun carrying is and is not allowed.

On May 15, 2015, The Living Center, a retirement community based in Mt. Vernon, Ohio sent a letter to the residents living in their community stating,

The armed-rally in Mt. Vernon was organized by a group of local citizens after the suspicious death of a 33 year old man in the local jail.  David Dehmann died in suspicious circumstances on April 21, 2015 after jail guards slammed his head into the jail’s concrete floor.

“We got a phone call at 4:00 a.m. from his mom just stating that he was in Grant Medical Center with head trauma and we need to get there,” step-mom Melissa Dehmann said.

According to police reports, Dehmann was arrested at 7:43 p.m. at a local elementary school for persistent disorderly conduct. He had been drinking. Once in the car, the officer says Dehmann became verbally abusive, hit the Plexiglas cage and spit on the passenger door window. Then, at the Knox County Jail, a deputy says Dehmann became aggressive with the jail staff and attempted to hit the deputy in the face, causing that deputy to place Dehmann in a take-down hold.

The jail guards claim that the take-down was justified but they were unable to explain why death would result from an action that is now being claimed to have been legal.

Initially the Ohio Bureau of Criminal Investigation told local news that the investigation is ongoing, that there is surveillance video of the incident but it will not be released, however after public pressure the video was released, showing a jail guard brutally slamming David Dehmann head-first into the concrete floor.

The armed protest was scheduled to take place on May 16 at the Mt. Vernon county jail in order to promote awareness about the importance of the incident and about police brutality.

Prosecutors in Knox County have also not explained if there will be any charges brought against the officers involved in the jail incident which led to Dehmann’s death.

While the letter sent out to the community by Chip McConville italicized the word “lawfully” in order to emphasize that the protest was legal, it also implies that residents may have reasons to fear for their lives or safety if they approach the area of the protest.  It states,

It is unclear why there were safety concerns or if the prosecutor’s office was simply attempting to distract the community from the real issue at hand, which is their refusal to prosecute abusive police officers. 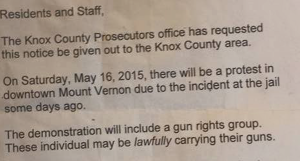 Virgil Vaduva is a Libertarian security professional, journalist, photographer and overall liberty freak.  He spent most of his life in Communist Romania and participated in the 1989 street protests which led to the collapse of the Ceausescu regime. He can be reached at vvaduva at truthvoice.com.