Bratton, largely seen as the architect of the “broken windows” law enforcement strategy that targets low-level offenses in order to stop larger offenses, has been heavily criticized by social justice advocates, who have charged that Bratton’s tactics amount to a targeting of people of color who are then saddled with criminal records, promoting further problems for themselves and their families.

While Bratton touts his record on crime – NYC has seen crime, especially violent crime, continue to drop to record lows under Bratton – he has a much more dubious record when it comes to police-community engagement. If anything, Bratton has become a lightning rod for criticism, especially in the wake of the 2014 murder of Eric Garner by NYPD officers, none of whom faced any criminal repercussions. Bratton faced similar criticisms in his other positions, including in Los Angeles and Boston, where he was sharply criticized for many of the same policies.

His resignation provides yet another scandalous example of how Bratton represents the very worst of the political establishment in the United States. While some will be celebrating his retreat from public office, it is critical to note that Bratton has accepted a job with Teneo Holdings, a consulting group closely linked to the Clinton political machine, as well as Israel and its lobby.

And it is here, at the crossroads of the national security state and the political ruling class, that Bratton will continue to protect and serve — the interests of the elite, that is.

Behind the curtain at Teneo Holdings

Teneo Holdings may ring a bell for political junkies, mainly because of the controversy that erupted in 2013 after it was revealed that Huma Abedin, the top aide to Hillary Clinton and wife of disgraced New York Rep. Anthony Weiner, had failed to disclose that she was simultaneously employed by the State Department and as a consultant for Teneo.

Of course, it wasn’t simply the lack of transparency that was of concern, but rather the obvious conflict of interest for a State Department employee with access to top level cabinet officials in the Obama administration to be representing outside interests. Indeed, this sort of highly unethical move by a close Clinton confidante is really par for the course for Hillary (and Bill) whose unethical dealings include overseeing arms deals to Clinton Foundation donors, appointing Clinton Foundation donors to key State Department positions, and raising money from individuals closely connected to foreign governments, among others. However, it is the relationship between the Clintons and Teneo that is of particular interest.

Teneo Holdings was founded by Douglas Band, a close adviser to former President Bill Clinton, and Declan Kelly, a major Clinton fundraiser and special envoy to Northern Ireland for Hillary when she was Secretary of State. Writing for Politico, Rachael Bade, reported in April:

“While serving as Clinton’s special envoy, reaching out to global corporations for those investments, [Kelly] was also working for two of them as a private consultant — earning about $2.4 million from Dow Chemical, a longtime client of his and one of the firms that participated in Clinton’s Ireland initiative.”

Once again, highly improper conflicts of interest seem to be as instinctive as breathing when it comes to the Clintons. But it is precisely these connections between political elites, major financial and corporate players, and the people behind Teneo, that is of most interest. Again, Bade explains:

“With Bill Clinton serving in the paid position of honorary chairman, and Hillary as secretary of state, Teneo [became] a blend of public relations advice for CEOs and more technical investor relations work. Corporate executives paid $250,000 a month — sometimes more — for consulting and assistance. They also, in some cases, got to hobnob with a former president. The firm forged a mutually beneficial relationship with the Clinton Global Initiative, the fancy annual Clinton Foundation event starring the former president and other world leaders. The New York Times and The New Republic first reported three years ago how the philanthropic gathering provided an ideal nexus for Teneo to both recruit new clients and enhance the visibility of existing clients by getting them speaking roles.”

It’s not difficult to see just what Teneo was doing: using connections and influence peddling to become one of the world’s premier consulting firms, one which could guarantee corporate interests and foreign states access to the most influential individuals in the uppermost echelons of power in the U.S. It’s not exactly the sort of product that just any run-of-the-mill consultancy could deliver.

And so, former NYPD Commissioner Bratton is heading to Teneo to serve as the head of the new risk management division where, according to the Wall Street Journal, he will “advise CEOs on how to deal with issues ranging from terrorism to cybercrime.” And Bratton is not alone; he joins former Clinton and Obama envoy to the Middle East, George Mitchell, as well as former British foreign secretary William Hague, as Teneo’s latest high-profile hire.

Again, the influence peddling and access is what is critical here. Bratton, Mitchell, and Hague represent the nexus between law enforcement, the national security state, the military-industrial complex, and U.S.-U.K.-NATO foreign policy.

Teneo, Israel, and the U.S. Empire

The connections between key figures in the Teneo/Clinton orbit and Israel abound. Take for instance the fact that Mitchell, one of the most well-connected political operators in the Middle East, is a senior advisor for Teneo while he has maintained working relationships with many members of the Israeli government and state. Crispin Hawes, managing director of Teneo Intelligence, is also closely connected to the region, having been Eurasia Group’s leading expert on the Middle East and North Africa.

Bratton, himself, has cultivated extremely close and friendly ties with the Israeli state. In May 2014, Bratton gave the keynote address at Israel’s National Conference on Personal Security in Jerusalem, a conclave of some of the leading figures in Israel’s (and the United States’) national security apparatus. The conference included influential attendees from around the world. 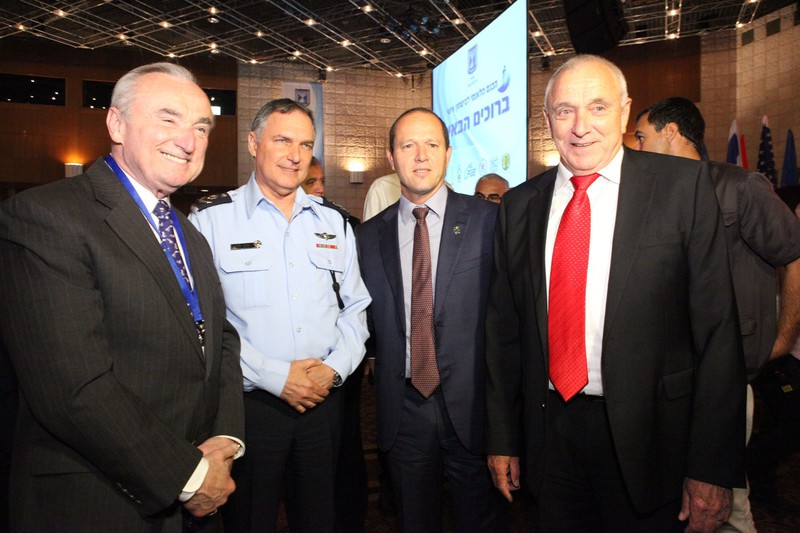 But this was certainly not the only time that Bratton had direct dealings with, and praise for, the security state of apartheid Israel. In fact, as chief of the Los Angeles Police Department, Bratton nurtured cooperative relations between the LAPD and Israeli security forces. As The Jewish Journal reported in 2014:

“The LAPD-Israel bond was in large part fused by former LAPD Chief William Bratton, who made official trips to Israel to learn about the country’s advanced counter-terrorism tactics during his chiefdom from 2002 to 2009. At a town hall meeting in Los Angeles near the end of his term, Bratton said of Israeli intelligence experts: ‘They are our allies. They are some of the best at what they do in the world, and that close relationship has been one of growing strength and importance.’”

In fact, those close ties between Bratton’s LAPD and Israel have endured long since his tenure in Los Angeles was over. The LAPD routinely sends officers and other officials to Israel for training and other initiatives, as do members of other police forces, including Boston and New York, both of which saw Bratton as police chief.

It’s no wonder then that the violent and brutal repression practiced by Israeli security forces against Palestinians has become a staple of U.S. law enforcement. Shoot first and lie about what happened. Shoot first and blame the victim. It works in the West Bank just as it does in Ferguson and Baltimore and Baton Rouge. And, in both cases, the guilty are exonerated while being held up as heroes by the media and political establishment. All the while, the body count keeps rising.

Bratton, of course, has no qualms with this, just as he’ll relish the opportunity to rub elbows with the world’s most influential people as he transitions to his new job with Teneo.

One evening soon Bratton will be sitting with the likes of Doug Band, Declan Kelly, and maybe even Bill and Hillary Clinton. They will toast to each others’ success as they laugh about the Crime Bill of 1994, the mass incarceration state, the prison-industrial complex, and the danger of “superpredators.” They’ll share stories about how their heroic policies, widely perceived as unabashedly racist, changed the American social fabric, making America safe again, to borrow a nauseating line from Donald Trump. They may even lament that they didn’t do more to expand the draconian policies for which they’ve come to be known.

They’ll also be cashing their checks. Big ones. Courtesy of the City of New York, Los Angeles, Israel, Wall Street and the military-industrial complex. And it goes almost without saying that at no point will Bratton and his Teneo cronies ever remember just how many hundreds of thousands, perhaps even millions, of lives they’ve ruined, families they’ve destroyed, and children their policies killed.

Such is the sociopathy of power in the Empire.