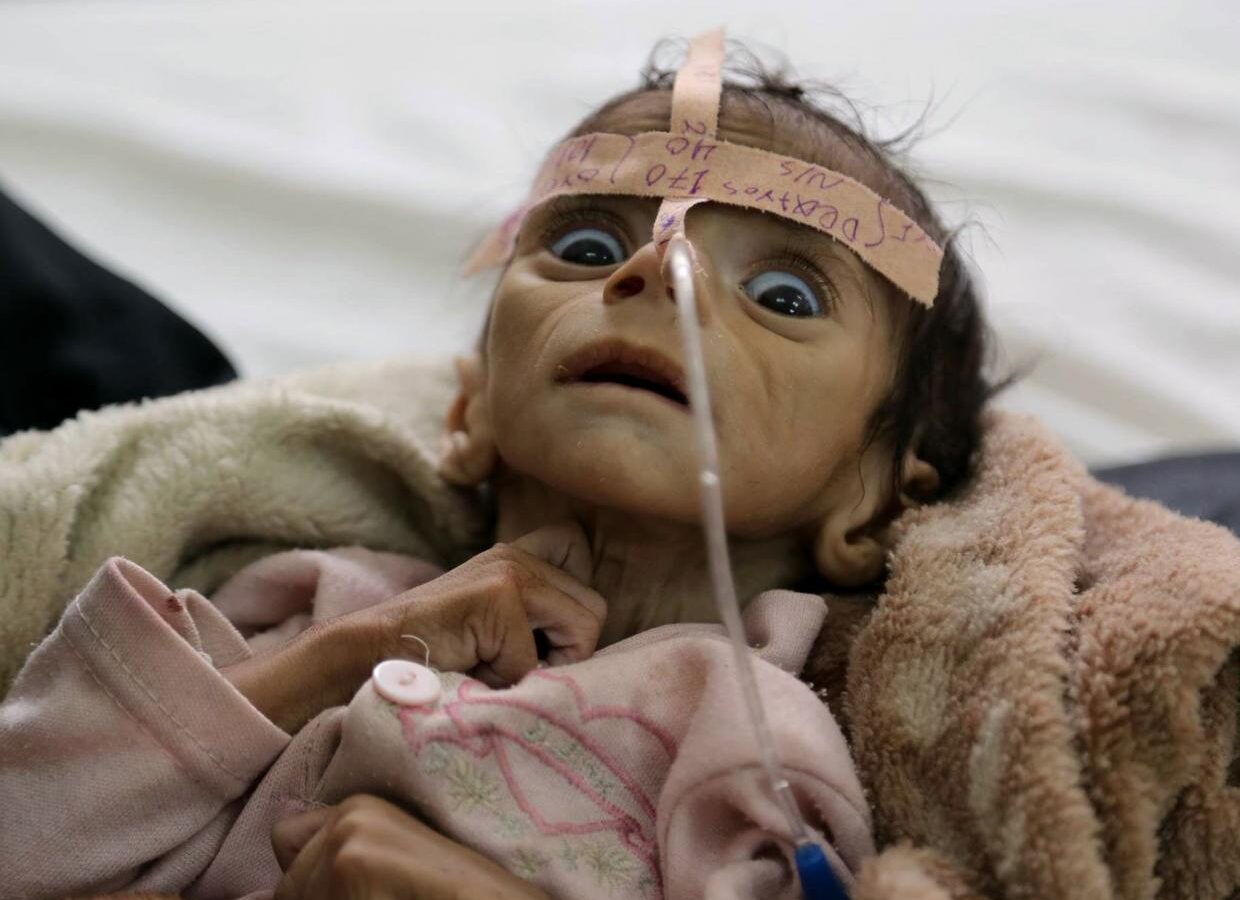 According to a report from UNICEF, the bombing campaign has taken an extraordinary toll on the civilian population in Yemen:

“Attacks on schools and hospitals and the denial of humanitarian assistance to children continue to occur. The UN verified 51 attacks on education facilities, including schools and personnel.”

A woman brings her child to hospital in Yemen to be treated for severe acute malnutrition.

(ANTIMEDIA) Yemen — A child has been killed or maimed every four hours in the year since Saudi-led airstrikes began in Yemen — a seven fold increase over the previous year. Though this is likely a tragic underestimation of the true number, nearly one-third of all civilian casualties are children.

According to a report from UNICEF, the bombing campaign has taken an extraordinary toll on the civilian population in Yemen:

“Attacks on schools and hospitals and the denial of humanitarian assistance to children continue to occur. The UN verified 51 attacks on education facilities, including schools and personnel.”

Sixty-three health facilities were attacked, the U.N. verified, and basic“services and infrastructure in Yemen are on the verge of total collapse.”

Even before the Saudi-led, U.S.-backed coalition began the now year-long offensive, Yemen had been one of the most impoverished countries in the world. But the intense fighting by all parties to the conflict has created a humanitarian crisis of alarming proportions — and children tend to be most affected.

“Children are not safe anywhere in Yemen. Even playing or sleeping has become dangerous,” Julien Harneis, UNICEF representative in Yemen, told AFP in an email.

“The scale of suffering in the country is staggering,” UNICEF’s report continues. “The violence has forced the majority of Yemenis into destitution. An estimated 21.2 million people — 82 per cent of the total population — need urgent humanitarian assistance. Almost half of those in need are children.”

That need has never been greater. As explained in the report, relentless airstrikes have exponentially magnified humanitarian issues that existed before U.S. bombs began dropping from Saudi coalition aircraft anddrones.

“Before March 2015, almost half of all children under the age of five were chronically malnourished. Today, UNICEF estimates that 320,000 children face severe malnutrition, while 2.2 million children need urgent humanitarian assistance to prevent further deterioration in their nutritional status.”

Along with malnutrition, a number of other health issues and fatalities, particularly among children, can be traced to ancillary impacts of war.

“UNICEF estimates that nearly 10,000 children under the age of five may have died in the past year from preventable diseases as a result of the decline in key health services … This is in addition to nearly 40,000 children who die every year in Yemen before their fifth birthday … Studies have shown that between 3 to 15 times as many people die from indirect causes of armed conflict.”

Civilian non-combatants experience the most devastating consequences from the bombing campaign, evidenced in part by disturbing reports of hospitals, an ambulance, a popular market — and even a wedding — destroyed by airstrikes. After a bomb on March 15 killed at least 120 people shopping at a bustling marketplace in Mastaba — the lone market in its entire district — questions began circulating about the possibility these airstrikes constitute war crimes.

“Looking at the figures,” Zeid Ra’ad Al Hussein, U.N. High Commissioner for Human Rights, said at the time, “it would seem the coalition is responsible for twice as many civilian casualties as all other forces put together, and people are struggling desperately to survive.”

UNICEF echoes Médecins Sans Frontières (Doctors Without Borders) in beseeching “all parties to the conflict [to] abide by the laws of war, and immediately stop attacks on civilians and civilian infrastructure, including schools, health and water facilities.”

As Water, Sanitation and Hygiene specialist for UNICEF, Marije Broekhuigsen, warned in the report, “Yemen is on the brink of a humanitarian catastrophe.”

This article (A Child Is Killed or Maimed Every Four Hours in War-Torn Yemen) is free and open source. You have permission to republish this article under a Creative Commons license with attribution to Claire Bernish andtheAntiMedia.org. Anti-Media Radio airs weeknights at 11pm Eastern/8pm Pacific. If you spot a typo, email[email protected].